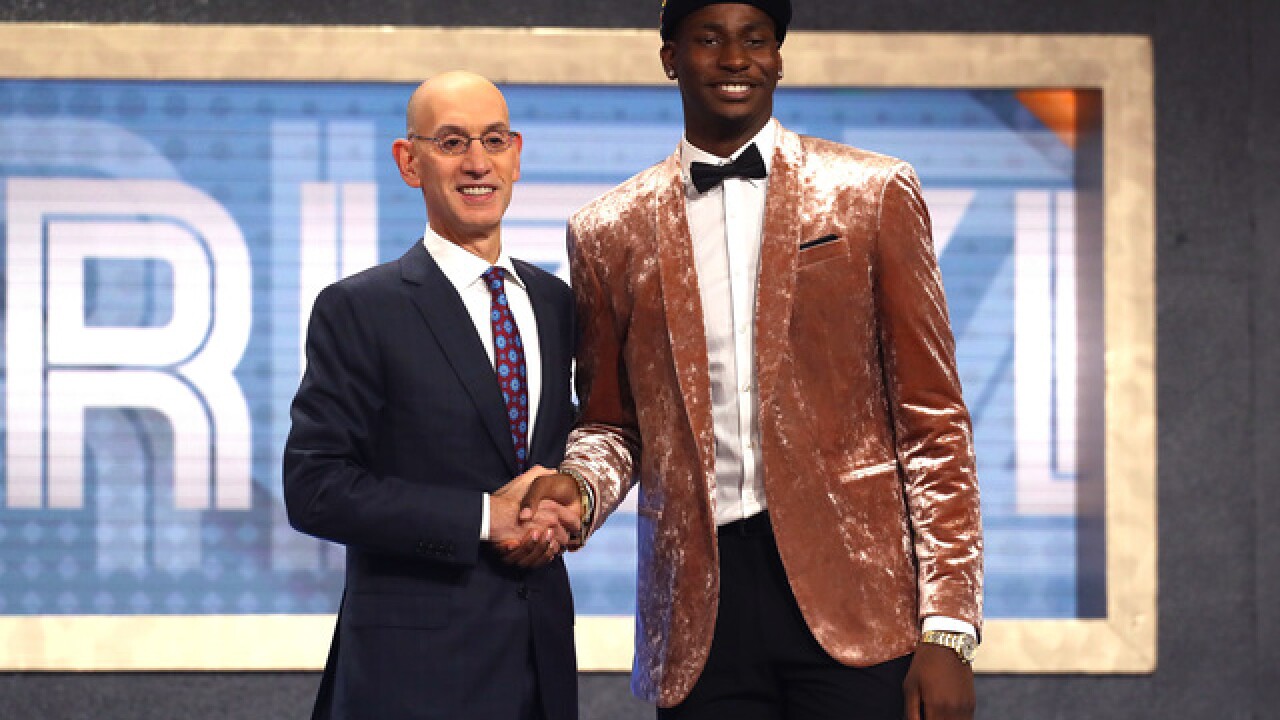 Copyright 2018 Scripps Media, Inc. All rights reserved. This material may not be published, broadcast, rewritten, or redistributed.
Mike Stobe
<p>NEW YORK, NY - JUNE 21: Jaren Jackson Jr. poses with NBA Commissioner Adam Silver after being drafted fourth overall by the Memphis Grizzlies during the 2018 NBA Draft at the Barclays Center on June 21, 2018 in the Brooklyn borough of New York City. NOTE TO USER: User expressly acknowledges and agrees that, by downloading and or using this photograph, User is consenting to the terms and conditions of the Getty Images License Agreement. (Photo by Mike Stobe/Getty Images)</p>

Despite reports the Grizzlies might trade out of the franchise's first lottery pick since 2010, Memphis stayed put Thursday night and selected Jackson immediately after the Atlanta Hawks selected Luka Doncic.

In his lone year at Michigan State, the forward averaged 10.9 points, 5.8 rebounds, and 3 blocks per game. Jackson has good defensive skills with quickness that allows him to keep pace with smaller players.

The fourth pick was the highest for the Memphis franchise since picking Hasheem Thabeet with the second overall pick in 2009. The previous time the Grizzlies had the fourth overall pick was in 2007 when they chose point guard Mike Conley from Ohio State.

Standing alongside the new Grizzly were his father, Jaren Jackson Sr., a former NBA player and coach, and his mother, Terri, who was wearing a championship ring from Jackson's time with the San Antonio Spurs.

The Grizzlies also had the 32nd overall pick in the second round.

Jackson joins a franchise coming off its worst season in almost a decade that featured a coach firing with J.B. Bickerstaff given the job May 1 for good after replacing David Fizdale in late November. With a rash of injuries, the Grizzlies went only a 22-60 for the second-worst record in the NBA behind Phoenix and snapped Memphis' streak of seven straight postseason appearances.

The poor record didn't help Memphis in the lottery drawing with the Grizzlies landing in the fourth spot. Still, it was the first time the Grizzlies had a lottery pick since selecting Xavier Henry out of Kansas with the 12th overall pick. The choice of Henry was part of run of unproductive choices for Memphis over the years.

Owner Robert Pera predicted last week that with the right pick -- someone to complement Conley and center Marc Gasol -- Memphis could consider a 50-win season.

Conley welcomed Jackson to Memphis on Twitter soon after the selection .