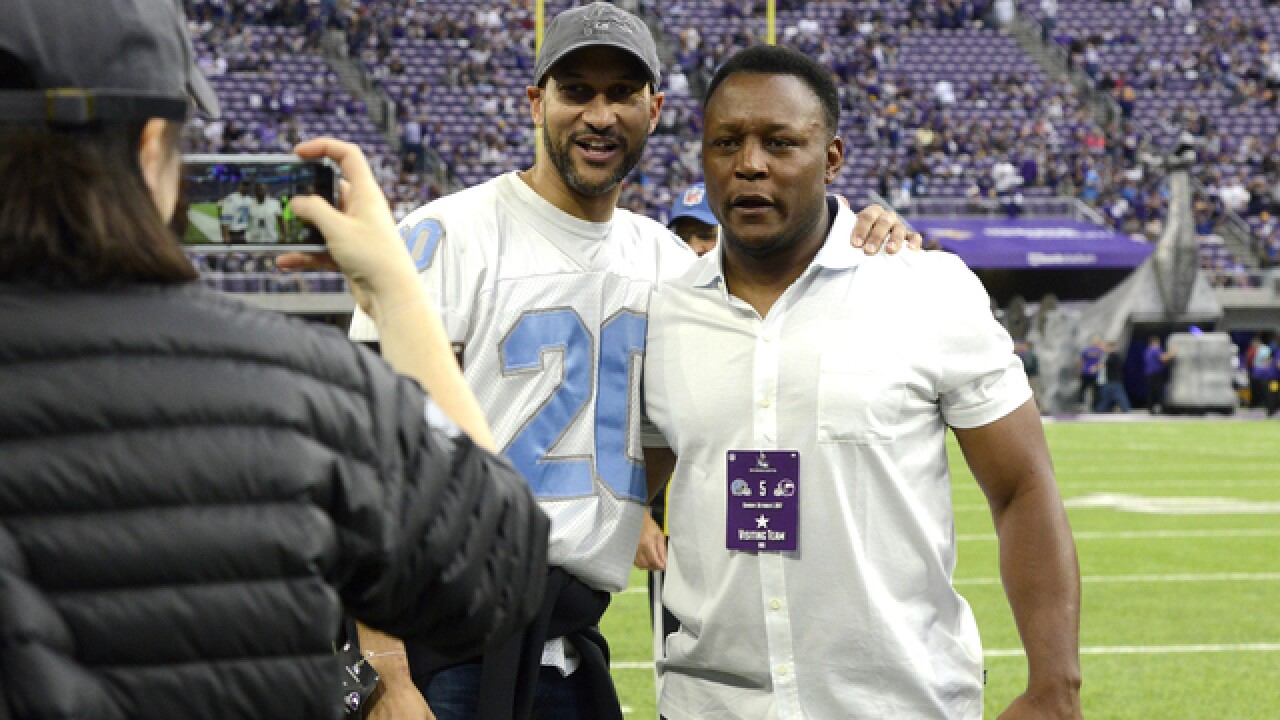 Image copyright 2018 Getty Images. All rights reserved. This material may not be published, broadcast, rewritten, or redistributed.
Hannah Foslien
<p>MINNEAPOLIS, MN - OCTOBER 1: Actor Keegan-Michael Key takes a photograph with former Detroit Lions running back Barry Sanders on the sidelines before the game between the Lions and the Minnesota Vikings on October 1, 2017 at U.S. Bank Stadium in Minneapolis, Minnesota. (Photo by Hannah Foslien/Getty Images)</p>

DETROIT (AP) — Barry Sanders shook hands with fans, posed for pictures and engaged in small talk outside a suite at Ford Field before the Detroit Lions opened the season against the New York Jets.

At halftime, the Hall of Fame running back was on the field to turn a huge key, and the stadium’s speakers blared with the sounds of an engine revving.

Sanders is in his second season as an ambassador for the team, a paid role that is sending him on the road for Detroit’s game against the Dallas Cowboys on Sunday.

“It’s definitely nice to be back after the first few years of being retired and there not being much communication,” Sanders said in an interview with The Associated Press. “So, certainly just being able to be involved with certain things that the team is doing from a community outreach standpoint and that sort of thing, for me, it’s great.

Sanders visits suite holders during games and attends meet-and-greet sessions along with going to other team functions such as its draft party.

“It’s great having him around and back in the fold, interacting with fans and corporate sponsors,” Lions president Rod Wood told The AP. “He’s probably if not the best player in Lions history, he’s in the handful of the best.

“And, he’s definitely the most remembered by our fans.”

While it may seem like a logical connection between the former star player and the only NFL team he played for, their relationship was not smooth in the years following his sudden and surprising retirement just before training camp began 1999.

Sanders is always showered with cheers in the Motor City these days. But he was booed in public at times back in the day by fans who were still unhappy he walked away from the game after 10 spectacular seasons when he was on the verge of becoming the NFL’s all-time leading rusher.

“I hated that it came to the point where he was getting booed,” said Lomas Brown, one of Sanders’ former teammates. “He’s one of the greatest ever and he did it all here in Detroit. There are still some people holding a grudge today, but that’s been gone for a while.”

Brown hopes the Lions take another step in their relationship with Sanders by honoring him with a statue at Ford Field.

“It’s hard to believe there’s not one,” Brown said.

Wood declined to say if there are plans to erect a Sanders statue.

When Calvin Johnson announced his retirement two years ago, it reminded people of Sanders’ decision to walk away from the game.

Like Sanders, the former star receiver chose to leave the Lions and the league with years left on his contract and seemingly some solid seasons left in his career.

Johnson retired two years ago and the team has tried and failed, so far, to rekindle its relationship with him.

As Sanders was the honored guest in Wood’s suite for a game earlier this month, Johnson was in a nearby luxury box on the same floor.

Brown believes time will take care of whatever issues are keeping Johnson from being a part of the organization in some way.

“If the Lions continue to reaching out to him and being warm to him, I think it’ll happen,” Brown said.

Wood is working on it.

“It’s still goal of the organization, and me in particular, to get Calvin back in the fold,” Wood said. “It was good to see him at the (Jets) game.”