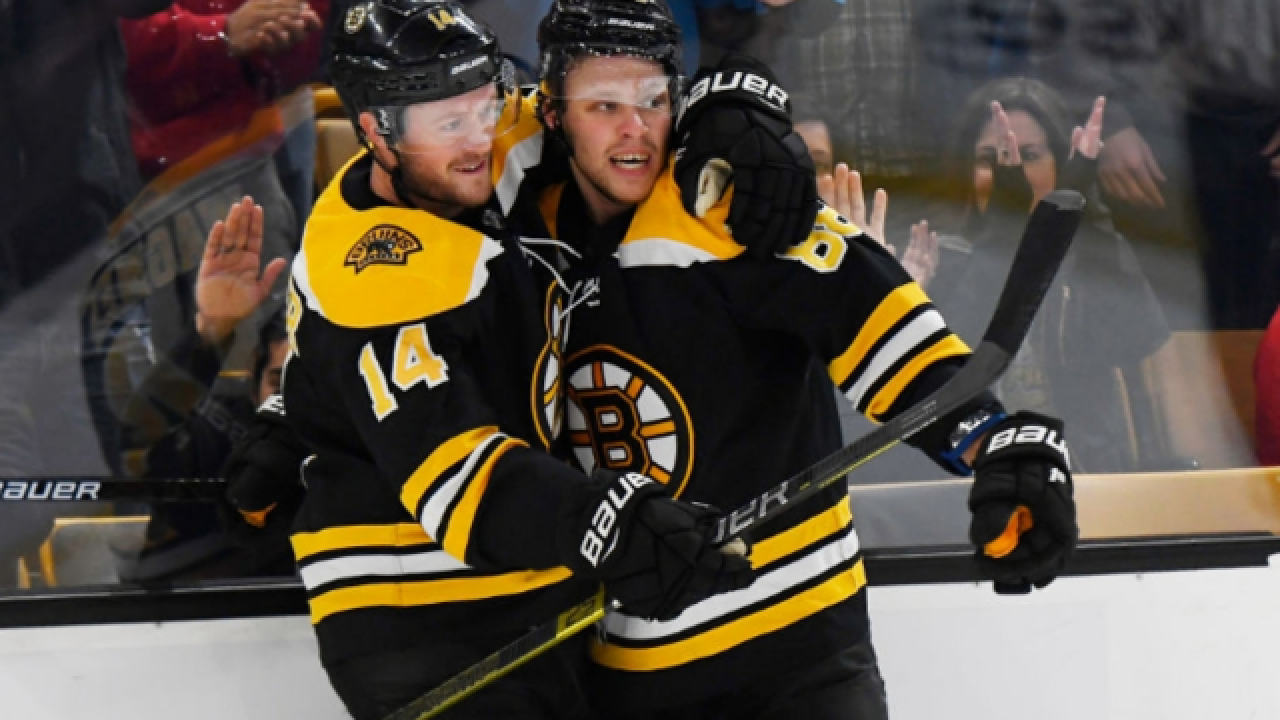 BOSTON (AP) -- David Pastrnak scored three times, giving him 101 goals in his career, and Patrice Bergeron had three assists as the Boston Bruins kept Detroit winless with an 8-2 victory over the Red Wings on Saturday.

It was the second career hat trick for Pastrnak, the 22-year-old Czech who has scored seven times in five games this season.

Jake DeBrusk scored twice and David Krejci had a pair of assists for the Bruins, who also got goals from Charlie McAvoy, Anders Bjork and Sean Kuraly.

Tuukka Rask had 32 saves to help Boston win its fourth straight while outscoring opponents 20-6 since getting shut out by Washington 7-0 in the season opener.

Filip Hronek and Dylan Larkin scored for the Red Wings, who fell to 0-5 for the first time since 1980. Jonathan Bernier had 31 saves for Detroit, which broke up the shut out on Hronek's power-play goal 21 seconds into the third, briefly cutting Boston's lead to 4-1.

Detroit has lost its last 10 against Boston.

The start time was moved up to 3 p.m. from 7 p.m. because of the opener of the American League Championship Series between the Houston Astros and Boston Red Sox at Fenway Park on Saturday night. Boston fans were looking ahead with the Bruins up big in the third period, chanting "Let's Go Red Sox!"

Pastrnak started the rout with 51 seconds left in the first period, taking the puck from deep in his own zone and going untouched before beating Bernier with a wrist shot for his 99th career goal.

Pastrnak got his 100th early in the second on a power-play, on one-timing a pass from Bergeron to put Boston up 4-0, and completed the hat trick at 2:05 into the period on one-timer off a pass from Brad Marchand on a 2-on-1. The game was stopped for a few minutes to clean up the dozens of hats that came showering down from the seats.

Bergeron got his third assist on the play. He set up Pastrnak's first goal and had another assist off a faceoff win and drop pass to McAvoy for a one-timer 4:44 into the second to put the Bruins up 2-0.

Notes: Pastrnak reached 100 goals in 259 career games, the third-fastest in franchise history, trailing only Barry Pederson (187) and Dit Clapper (247). ... The loudest cheer of the day came during a stopage in the second period when the big screen monitor showed the Red Sox celebrating to the tune of "New York, New York" after advancing to the ALCS with a win over the Yankees.

UP NEXT
Red Wings: At Montreal on Monday night.
Bruins: At Calgary on Wednesday night.