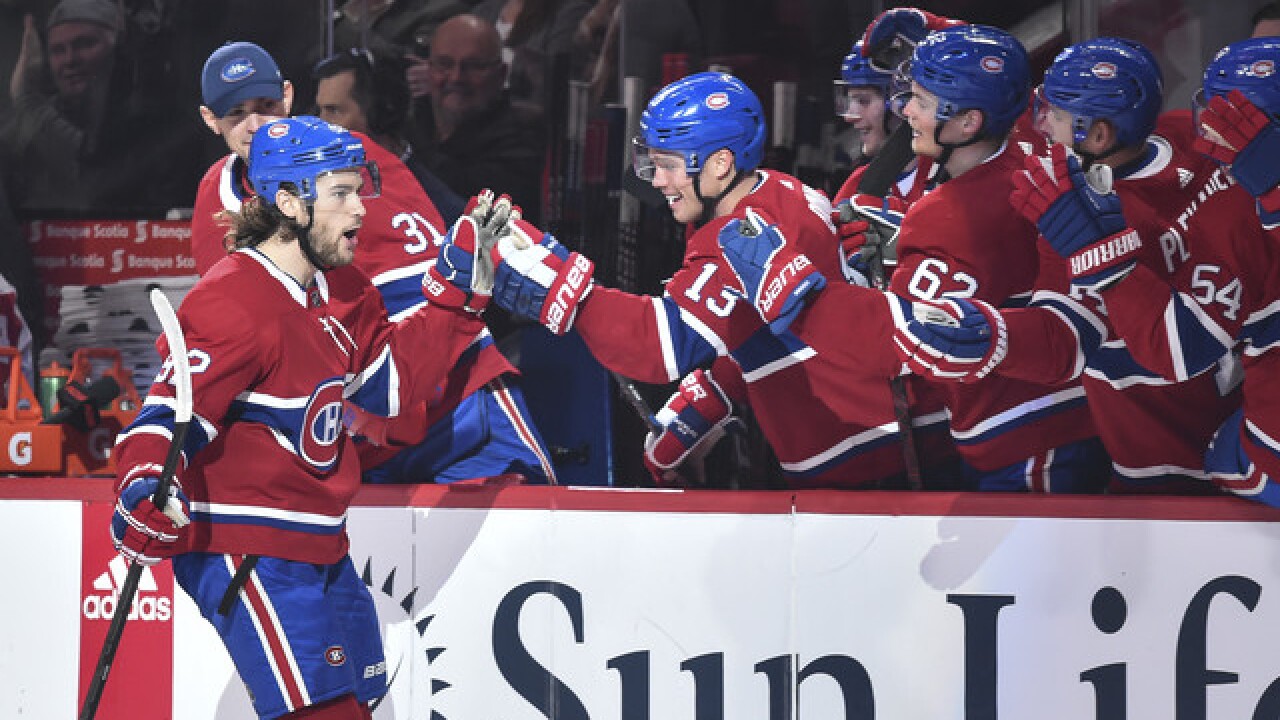 Copyright Getty Images
Minas Panagiotakis
<p>MONTREAL, QC - OCTOBER 15: Jonathan Drouin #92 of the Montreal Canadiens celebrates a penalty shot goal in the first period with teammates on the bench against the Detroit Red Wings during the NHL game at the Bell Centre on October 15, 2018 in Montreal, Quebec, Canada. (Photo by Minas Panagiotakis/Getty Images)</p>

Andreas Athanasiou had two goals and Thomas Vanek also scored for the rebuilding Wings, who are winless through six games (0-4-2) for their worst start in franchise history. Jimmy Howard gave up five goals on 20 shots before being replaced by Jonathan Bernier in the second period. Bernier finished with 13 saves.

The Red Wings, who were coming off an 8-2 loss to Boston, have now allowed an NHL-worst 29 goals over six games.

Montreal has won six straight against Detroit dating back to March 2017.

After Drouin opened the scoring for Montreal on a penalty shot at 7:13 of the first, Plekanec made it 2-0 by shooting a puck on goal that Filip Hronek deflected past his own goalie at 16:56.

Athanasiou got one back for Detroit 28 seconds later before Tatar restored the two-goal lead by batting a puck in mid-air past Howard in the waning seconds of the first.

Gallagher got his third of the season at 3:52 of the second on a nice pass from Tatar. Hudon made it 5-1 less than a minute later.

Drouin, on the power play, scored his second of the game with just over 4 minutes remaining in the period as he shovelled a loose puck past a sprawled-out Bernier.

Athanasiou pulled the Red Wings to 6-2 at 7:30 and Vanek caught Niemi looking the wrong way on a wraparound at 10:11 for his first point of the season.

Byron added Montreal's seventh goal of the game with 1:49 remaining.

NOTES: Plekanec became the 324th player in NHL history, and the 13th active, to reach the 1,000-game plateau. The crowd gave him a standing ovation in the first period. The Czech native is the 12th Canadiens player to reach the milestone. ... Like Price, Andrew Shaw was sidelined with the flu.