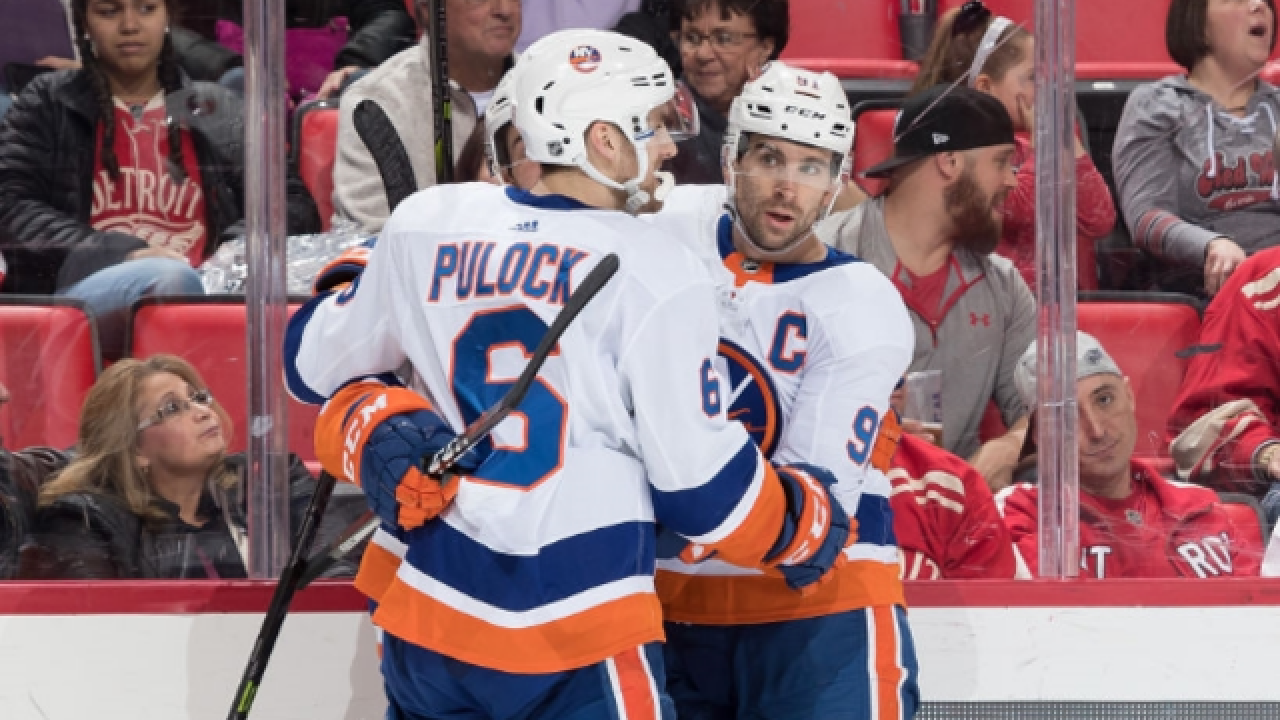 DETROIT (AP) -- John Tavares scored 3:16 into overtime as the New York Islanders rallied for a 4-3 victory over the Detroit Red Wings in the season finale on Saturday night.

Tavares, set to be a free agent in the offseason, snapped a wrist shot past Red Wings goalie Jared Coreau on the stick side.

Ryan Pulock's power-play goal with 29.7 seconds left in regulation sent the game to the extra period as Detroit squandered a 3-1 lead.

Anders Lee got his 40th goal and Andrew Ladd also scored for the Islanders (35-37-10), who are missing the playoffs for the second straight year and eighth in the last 11. Thomas Greiss stopped 36 shots to help New York win its third straight, it's best streak since a three-game run Jan. 7-15.

Mathew Barzal had two assists for the Islanders to give him 63, tying Bryan Trottier's franchise record for a rookie set in 1975-76. It also tied Barzal with Penguins star Sidney Crosby (2005-06) for the second-most in the NHL by a rookie since the 1983-84 season. Joe Juneau leads that list with 70 for Boston in 1992-93.

Henrik Zetterberg, Justin Abdelkader and Dylan Larkin scored for the Red Wings (30-39-13), who are also missing the postseason for a second straight season after making it in 25 straight. Larkin's goal was his seventh in the last 10 games. Coreau finished with 35 saves.

Lee started the comeback with a backhander over Coreau's shoulder at 6:25 of the third to pull the Islanders to 3-2. He became the franchise's first player with 40 goals since Jason Blake in 2006-07.

Detroit opened the scoring 7:13 into the game when Zetterberg threw the puck toward the Islanders' net from the side boards and it deflected off Tavares past Greiss.

The Islanders tied it 3:51 into the second period as Ladd took a feed from Cal Clutterbuck in the slot and zipped a quick shot by Coreau on the glove side.

Zetterberg's pass in front to Abdelkader banked into the net off Abdelkader's right skate to give the Wings a 2-1 advantage with 8:02 left in the second.

Larkin made it 3-1 at the 4:10 mark of the third period, chipping a loose puck over Greiss as the goaltender was reaching out with his stick to poke it away to safety.

NOTES: Zetterberg played in all 82 of Detroit's games for the third straight season. ... Red Wings C Luke Glendening returned after missing one game with an upper body injury. ... Detroit placed Coreau on waivers Saturday. If he clears, he will be assigned to AHL Grand Rapids for the Calder Cup playoffs. ... Abdelkader's goal was his 100th in the NHL. ... Detroit LW David Booth appeared in back-to-back games for the first time since Feb. 25-28. . The Red Wings and Islanders combined for 29 goals in three games this season. . Barzal leads all NHL rookies with 27 power-play points. . Pulock leads all NHL rookie defensemen in goals (10).