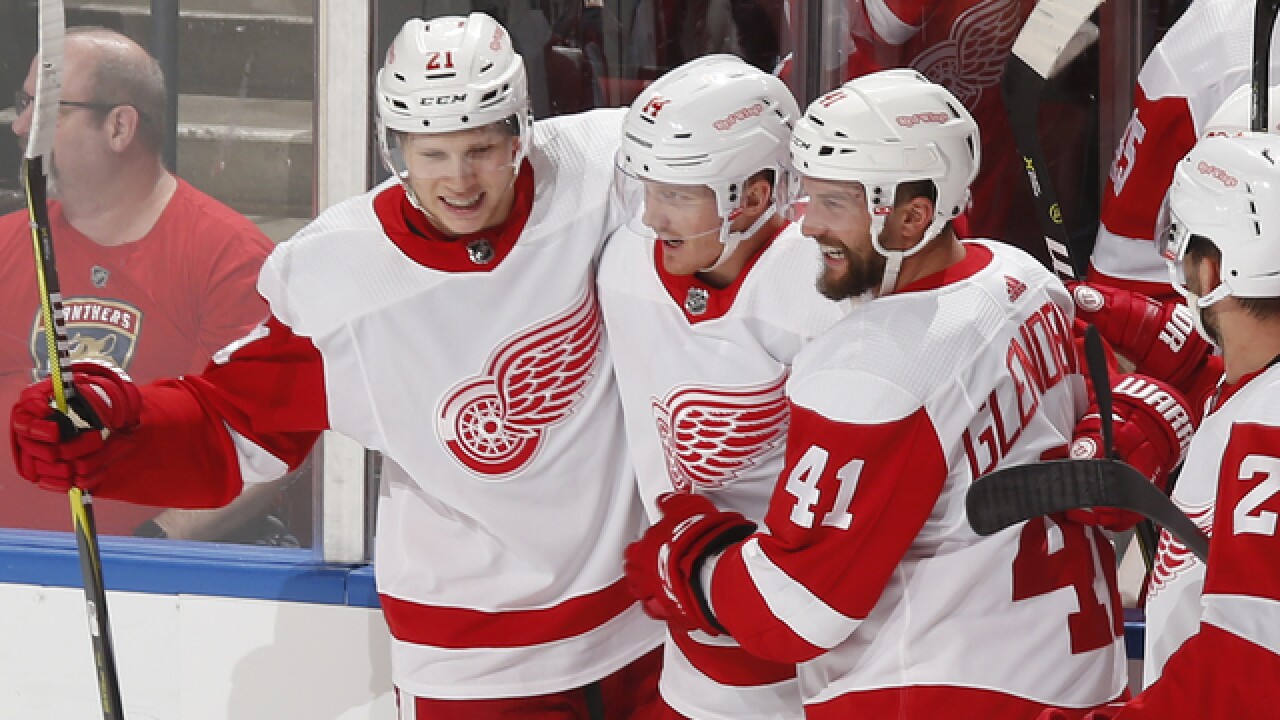 Copyright Getty Images
Joel Auerbach
<p>SUNRISE, FL - OCTOBER 20: Gustav Nyquist #14 is congratulated by Luke Glendening #41 ad Dennis Cholowski #21 of the Detroit Red Wings after he scored the winning goal in overtime against the Florida Panthers at the BB&T Center on October 20, 2018 in Sunrise, Florida. The Red Wings defeated the Panthers 4-3 in overtime. (Photo by Joel Auerbach/Getty Images)</p>

DETROIT (AP) — A Detroit Red Wings home game looks and sounds a little like a memorial these days.

The lights are dimmed as images of the franchise's glorious past flash digitally onto the ice before the puck drops, reminding the relative few fans in the stands how good things used to be. And, they were good. Really good.

Detroit's 11 Stanley Cup banners are lowered from the rafters where retired jerseys are also displayed, rekindling memories of the four titles from 1997 to 2008 and the seven championships from 1936-55. The most successful U.S.-based NHL franchise has had some of the game's all-time greats wear its sweater, adorned with a winged well, from Gordie Howe to Steve Yzerman and Nicklas Lidstrom.

The good times fade during the lights-and-sounds pregame show as the pace of the music picks up and a video montage shows the current team, mostly a mix of role-playing veterans and not-ready prospects. When the lights are turned up closer to game time, more seats appear to be empty than occupied on some nights.

Detroit is among the worst teams in the league this season — as expected and by design. The Red Wings hope a painfully poor season will help get them on the fast track to retool with difference-making players in the draft along with some help from veterans in free agency.

"I knew it was coming and I was prepared for it," said Red Wings senior vice president Jim Devellano, who is in his 37th season with the team and his 52nd in the NHL. "I don't like it. It upsets me, but not to the point that I'm going to go off the deep end."

The Red Wings appear destined to miss the playoffs for a third straight year after a remarkable run of 25 consecutive postseason appearances. Other than the current players and coaches, who are trying to win every game, losing is seen as a necessary evil. Some fans, though, appear to be so fed up they don't even sit in seats they paid for to attend games.

In an effort to make the sparsely filled sections at Little Caesars Arena stand out less in person and on TV, the backs of red seats have been temporarily covered in black. They will eventually be replaced by black chairs at a considerable cost in a 1-year-old arena that is the centerpiece of a $1.2 billion project.

Detroit got off to the worst start in franchise history by opening with seven losses and winning only one of its first 10 games. The Red Wings have bounced back with four wins in their last five.

"I wouldn't say it takes the sting out of the slow start, but it's something to build off of for sure," forward Justin Abdelkader said during the recent surge.

Winning could prove to be counterproductive for the Motor City's hockey team this season.

Part of what has held the Red Wings' rebuilding effort back is the fact they haven't had a No. 1 overall pick in the draft in recent years to get a generational player. If they lose enough this season and have some luck in the NHL draft lottery to get the top pick, Jack Hughes would give the franchise and its followers a desperately needed boost. Hughes is a playmaking center for USA Hockey's 18-under team, which trains and plays in suburban Detroit. His skill would help the team on the ice, though perhaps not right away, and his presence would provide a boost in interest for a team struggling to regain its standing as one of the most popular in a sports-crazed state.

The Red Wings have also hurt their chances of continuing the success they had for two-plus decades by drafting players, particularly on the blue line, that didn't pan out. And while Detroit is close to the bottom in the NHL standings, its payroll is larger than about 20 teams in the league.

The team has invested in its 2014 first-round pick, 22-year-old center Dylan Larkin , by giving him a $30.5 million, six-year contract last summer. It is trying to surround him with players to push the franchise back toward the playoffs and eventually championship contention.

"We've got to rebuild by drafting, developing and being patient," general manager Ken Holland said early in his 22nd season in charge and 36th with the franchise. "I believe we're headed in the right direction with a lot of young kids we think are ready to come of age."

Chris Ilitch, the most powerful person in the organization, seems to agree with him. The president and CEO of Ilitch Holdings, which owns the team and the arena, gave Holland a two-year contractearlier this year to continue guiding a long-term rebuilding project that is counting on 30-plus draft picks from 2017-19.

"Kenny Holland has done a marvelous job at accumulating picks, which are so important to executing a successful rebuild," Ilitch said. "I think you're starting to see the fruits of the labor."

GAME OF THE WEEK

The defending champion Washington Capitals host Pittsburgh on Wednesday night, the first meeting between the teams since the Penguins won their season opener. Pittsburgh has lost a season-high four straight games after a strong start, while Washington has dropped three of five.