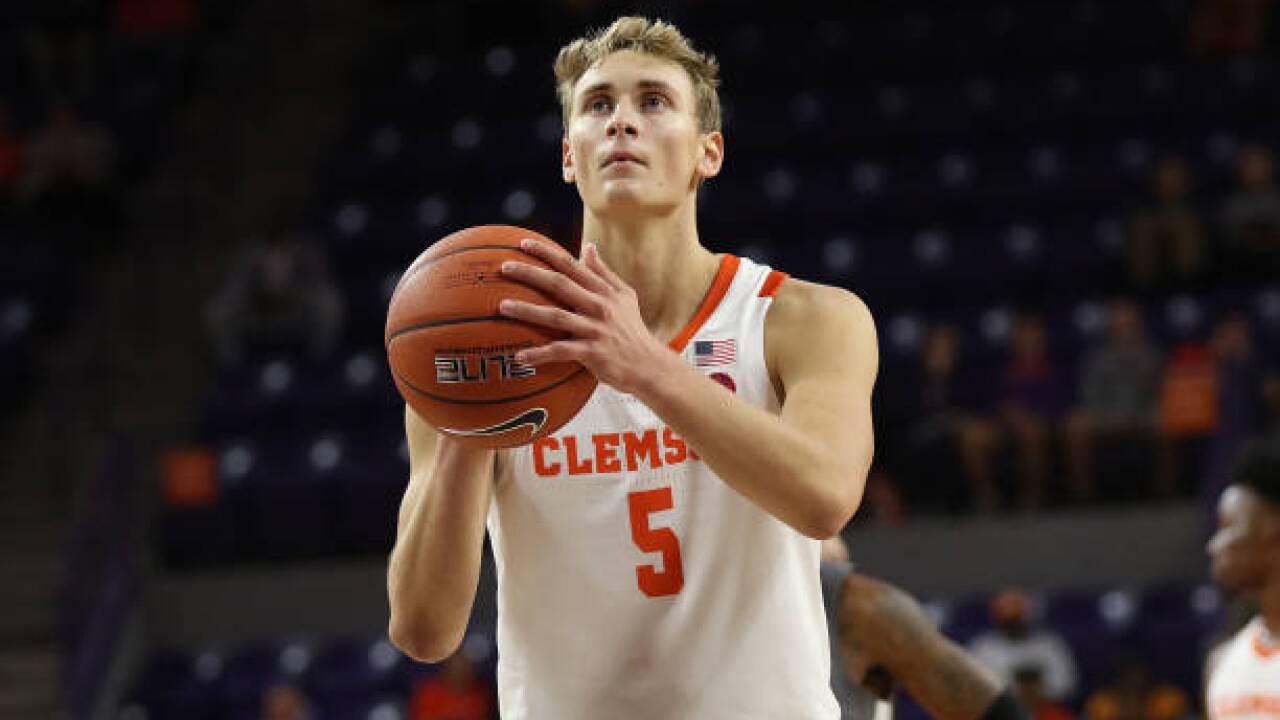 CLEMSON, S.C. (AP) -- There's a simple path for Hunter Tyson to get more playing time at Clemson: defend hard and shoot well like he did against Detroit Mercy.

The 6-foot-8 Tyson had a career-high 20 points off five 3-pointers to lead the Tigers to their third straight victory, 87-65, over the Titans on Sunday.

Tyson came off the bench to give Clemson (3-1) a boost, going 5 for 10 from behind the arc and staying strong on defense.

Clemson coach Brad Brownell said the game played to Tyson's strengths of hitting open shots and keep out of reach of defenders. He was also critical to defense effort that limited Detroit Mercy to just 32 percent shooting.

"He needs to be out there and continue to defend," Brownell said.

Especially, if the sophomore can perform like this going forward. Tyson surpassed his previous best of nine points set in a win over Pitt last February. He had averaged less than four minutes a game on a team with four senior starters who soaked up much playing time.

Now, Brownell hopes Tyson can be part of the front-line rotation, even coming off the bench.

The Tigers opened a double-digit lead in the first half, helped by three of Tyson's baskets behind the arc, and maintained that lead the rest of the way to take its third consecutive victory after opening the season and Atlantic Coast Conference play with a 67-60 loss at home to Virginia Tech.

Tigers freshman Al-Amir Dawes got things going with a 3-pointer and before Tyson struck from long-range. Tyson added a foul shot and when he hit his third 3-pointer of the period, Clemson was ahead 36-26.

Detroit Mercy got as close as six points, the last time at 58-52 on Sam Hofman's 3-pointer with 9:37 to go, in the second half, but could not cut the deficit any further.

Aamir Simms had 19 points and eight rebounds for Clemson. Texas and Alabama transfer Tevin Mack added 18 points for the Tigers.

Davis, the son of Detroit Mercy coach Mike Davis, led his team with 26 points, although he shot just 6 of 20 from the field. Davis made 12 of his 13 foul shots.

"I thought we had some good moments," said Detroit Mercy coach Mike Davis, one-time Indiana coach. "We had it at six (points), but just ran out of gas. Give them credit for being very physical with us and with Antoine. We will learn from this game."

Detroit Mercy: It's a brutal start to the season for Detroit Mercy, which opened at North Carolina State and will play its first seven games away before its home opener with Eastern Michigan on Dec. 7.

Clemson: The Tigers could use a boost from the outside that Tyson gives them. They came in averaging nine 3-pointers a game but finished 11 of 33 on long-range shots against Detroit Mercy. Tyson finished 5 of 10 from behind the arc.

Hunter Tyson did not have the start he hoped for with only 12 total points through three games and just two 3-pointers. It all came together, he said, because he focused on staying ready and prepared. "Just staying confident," Tyson said. "Just keeping my head down and not try and worry about all the other stuff."

Clemson concludes a five-game homestand to open the season when it faces Alabama A&M on Thursday night.