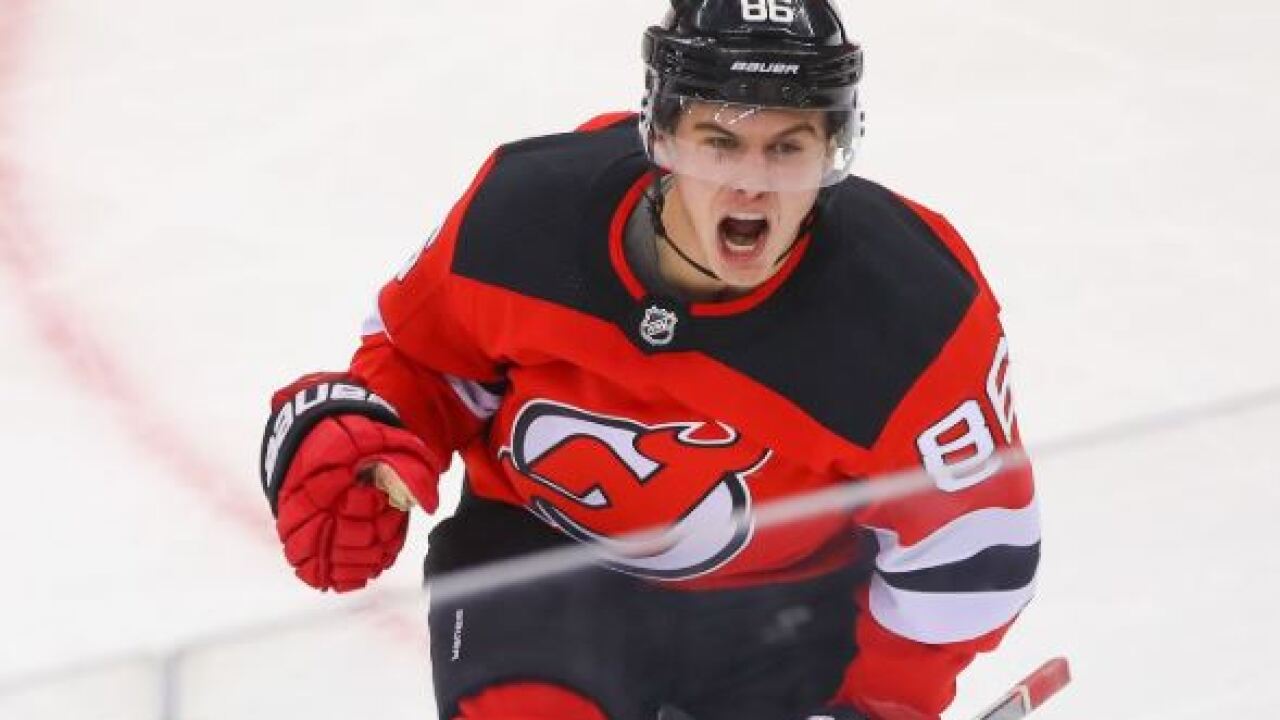 Getty
NEWARK, NJ - OCTOBER 19: New Jersey Devils center Jack Hughes (86) celebrates after he scores his first career NHL goal during the first period of the National Hockey League game between the New Jersey Devils and the Vancouver Canucks on Octobet 19, 2019 at the Prudential Center in Newark, NJ. (Photo by Rich Graessle/Icon Sportswire via Getty Images)

NEWARK, N.J. (AP) — This time, Jack Hughes got the better of his older brother, Quinn.

He had plenty of witnesses, too.

The 18-year-old Hughes scored his first career goal in his first NHL game against his 20-year-old brother Quinn Hughes, and the New Jersey Devils beat the Vancouver Canucks 1-0 on Saturday.

And he did it against his brother Quinn’s team — with their parents in the stands. What a moment! pic.twitter.com/hFa433VDb6

Jack Hughes played in his eighth NHL game after he was selected by New Jersey with the No. 1 overall pick in this year’s draft.

He became the first player to score his first NHL goal in a 1-0 regular-season game since Andreas Athanasiou for Detroit against Washington on Nov. 10, 2015.

“I’ve felt good in every game,” Hughes said. “Each game has been a building block for me. I think it was a little overdue.”

Quinn Hughes was a first-round selection by Vancouver in 2018. There were approximately 80 Hughes family members and friends on hand for their first NHL matchup.

New Jersey went ahead to stay on Hughes’ power-play goal 14:08 into the first period. Taylor Hall kept the puck on his stick while eluding two defenders and fired cross ice to Hughes, who beat Canucks goalie Thatcher Demko.

“It’s such an awesome feeling,” Jack Hughes said. “To come out here and play in front of my family and friends. It’s nice to be able to beat Quinn. The two games we’ve won, we’ve played much better hockey.”

Demko finished with 23 saves for Vancouver, which had won four in a row.

Blackwood was especially stingy in the second period, when he turned aside 14 shots, including three in a frantic 43-second stretch.

With seven minutes left, Elias Pettersson fired a high shot that Blackwood pushed off the crossbar. Then he stopped Alexander Edler on a breakaway after Edler left the penalty box. The rebound bounced out to Edler, who fired it through the crease.

The Devils’ penalty killers had another solid performance, killing off six power plays two days after killing off seven straight chances against the New York Rangers. The Devils allowed eight power-play goals over their first six losses of the season.

“The penalty kill is because of an attention to detail,” Devils coach John Hynes said. “We’ve been able to clear pucks from our zone. We’ve been able to maintain pressure up ice. In the games we hadn’t won, it was the little things that we didn’t do. I think we’re more consistent.”

NOTES: Although C Nico Hischier missed his second straight game with an upper-body injury, it was the first appearance at home since he finalized a $50.75 million, seven-year contract extension Friday. “I’m happy it’s a long-term deal,” Hischier said. “I’m happy with the direction the team is going in. I’ve been treated well here. I have felt welcomed here since Day 1. I have no reason not to sign here long term. I don’t have to worry about that now.” The 20-year-old Hischier, the No. 1 pick overall in 2017, could have become a restricted free agent at season’s end. ... The Devils activated D Andy Greene off the injured list and put D Will Butcher (upper body) on the injured list. ... Hughes scored his first NHL goal on Oct. 19, 2019, and Hischier scored his first NHL goal on Oct. 19, 2017. ... Hughes (18 years, 158 days) is the second-youngest player in franchise history to score his first NHL goal. Craig Wolanin (18 years, 135 days) is the youngest. ... The Canucks wore their 50th anniversary jerseys with the team’s original colors.