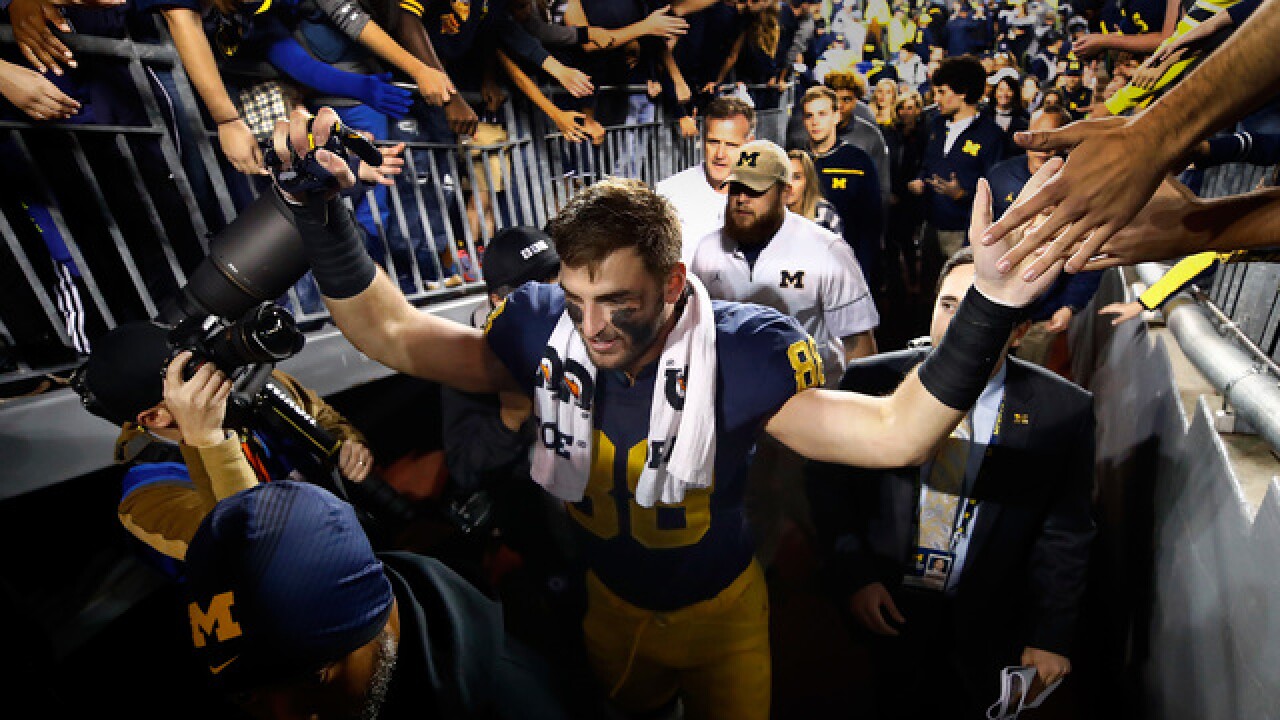 ENGLEWOOD, Colo. (AP) -- Jake Butt couldn't help but get a little nostalgic over the simple routine of putting all his pads on again.

Reasonable. It's been a while.

The Denver Broncos tight end returned to the field in full gear Tuesday for the first time since tearing his right ACL against Florida State in the Orange Bowl on Dec. 30, 2016.

"I kind of thought about it when I put on the pants. It was like, `Man, I haven't put on the pads in almost two years,"' the Michigan standout said. "It was exciting. It felt good out there."

Next order of business: Jerseys.

Butt and his family don't mind having a little fun with their last name. And now that he's fully healthy, those No. 80 uniforms will be going fast -- taken by his clan and completely customized (his father had "Papa Butt " on his jersey when Jake was at Michigan).

"We're ordering in bulk," Butt said. "We're building the `Butt Army' out here, for sure."

It was on hold last season as the 23-year-old recovered from the knee injury that caused him to slip to the fifth round of the 2017 draft. The Broncos were hopeful to have him back for the second half last season, but he wasn't ready and went on injured reserve.

He could be a big boost to the tight end corps. The 6-foot-6, 250-pound Butt won the John Mackey Award as the nation's top tight end his senior season at Michigan. He had three catches for 28 yards against Florida State in the Orange Bowl before tearing his knee.

His recovery has been somewhat slower than he anticipated. The rehab has been filled with plenty of ups and downs.

"It's not just you're getting better and better every day. You have some days that are better than others," said Butt, who had 138 catches for 1,646 yards while with the Wolverines. "In that sense, you have a mental component. But once you're on the field, for me personally, you're playing football. You're not thinking about any bumps and bruises you might have."

He used the down time in 2017 memorizing his routes and reads. He's putting it to good use now.

"I had a year to observe how pro football really works," Butt said. "Going back to the spring, I really got into the playbook so I can hit the ground running in camp."

Butt has plenty of competition in camp among a tight end group that's got deep Big Ten Conference roots. There's rookie Troy Fumagalli, a fifth-round pick out of Wisconsin. There's also Jeff Heuerman, a third-round pick in 2015 from Ohio State who's currently sidelined by a balky knee. Not to be left out: Matt LaCosse attended Illinois.

Fumagalli has an easy explanation for the league's representation.

Butt's hoping to display that throughout camp.

"You know you can't come in and take a day off because that next guy up is hungry," Butt said. "Everyone in our room is making plays and doing a great job. That's going to help us in the long run."

"Case is doing a great job connecting with a lot of guys out there," Butt said. "That's the advantage of having a veteran quarterback. He understands where to go with the ball, where to put the ball, what reads to make. We're trying to take advantage of that."