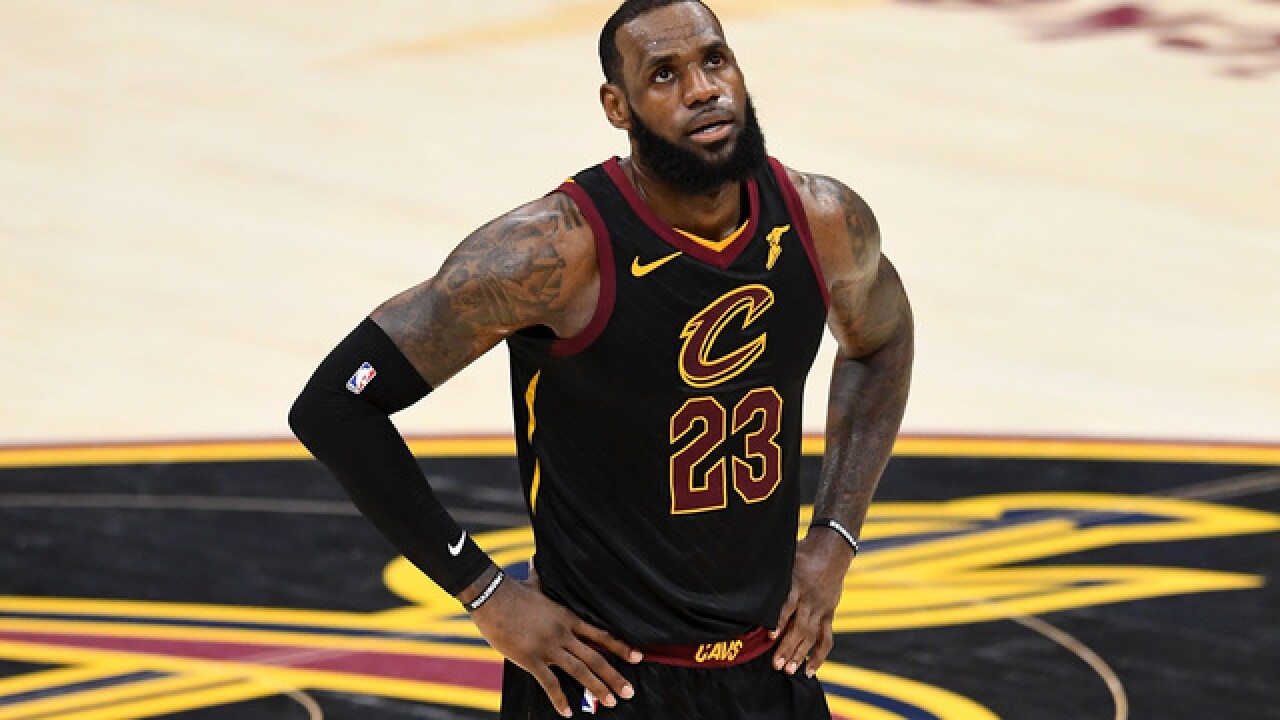 Copyright Getty Images
Jason Miller
<p>CLEVELAND, OH - JUNE 08: LeBron James #23 of the Cleveland Cavaliers looks on in the second half against the Golden State Warriors during Game Four of the 2018 NBA Finals at Quicken Loans Arena on June 8, 2018 in Cleveland, Ohio. NOTE TO USER: User expressly acknowledges and agrees that, by downloading and or using this photograph, User is consenting to the terms and conditions of the Getty Images License Agreement. (Photo by Jason Miller/Getty Images)</p>

CLEVELAND (AP) -- LeBron James is approaching a deadline that may be little more than a starting line.

Not just for him, but for free agency around the league.

The NBA's most impactful player has until 11:59 p.m. Friday to decide what to do with a $35.6 million contract option for next season with the Cleveland Cavaliers. If he declines the option, which is what's expected to happen, James will become an unrestricted free agent and another Summer of LeBron will heat up instantly with the Los Angeles Lakers becoming a possible destination.

Cleveland, too, would still be in the mix as James could sign a short-term deal with the Cavs. He has done that each season since returning in 2014.

If James exercises or picks up his option, the three-time champion would be under contract next season with the Cavs, but that would not preclude the Eastern Conference champions from trading him to acquire assets to build for the future.

As of late Thursday afternoon, James had not informed the Cavs of his plans while reports about his future filled Twitter timelines and talk radio programs.

James, who has kept a low profile on social media for months, has been on vacation with his wife and three children, giving him a chance to recover from perhaps the most exhausting season of his career and plot the next chapter.

The 33-year-old has long been linked to the Lakers, partly because he has two homes in the Los Angeles area along with a film production company. There's also the fact that the Lakers have enough salary-cap space to sign James and another maximum-contract player like Kawhi Leonard or Paul George and form a "Super Team" capable of competing with the reigning champion Golden State Warriors.

The first major free-agent domino fell Thursday as George decided not to exercise his $20.7 million option for next season with Oklahoma City, a person with knowledge of the situation told The Associated Press on condition of anonymity. ESPN first reported George's decision.

For now, George is set to hit the market when free agency officially begins at 12:01 a.m. Sunday, but he may not go anywhere. The Thunder can offer him more money and George could get a five-year, $176 million and stay in Oklahoma.

It's unclear what affect, if any, George's decision has had on James and his plans. The two are good friends and there's little doubt they would relish the opportunity to play together after competing against each other for years.

As for Leonard, there's little clarity on his troubled relationship with San Antonio. It remains unclear if the Spurs are willing to trade him and if they are willing to part ways with him, where he would land.

For James, the dilemma is whether to leave his home again. Upon his return to Cleveland four years ago from Miami, James said it took time away to realize what he was missing.

"My relationship with Northeast Ohio is bigger than basketball," he said. "I didn't realize that four years ago. I do now."

James also said he always felt like he would come back to Cleveland to finish his career where it began.

But that was before the Akron native led the Cavs to four straight Finals and won Cleveland's first professional sports title since 1964. If Decision 3.0 is to go, James feels content.

"I came back because I felt like I had some unfinished business," he said following Game 4 of the NBA Finals. "To be able to be a part of a championship team two years ago with the team that we had and in the fashion that we had is something I will always remember. ... It ended a drought for Cleveland of 50-plus years, so I think we'll all remember that in sports history."