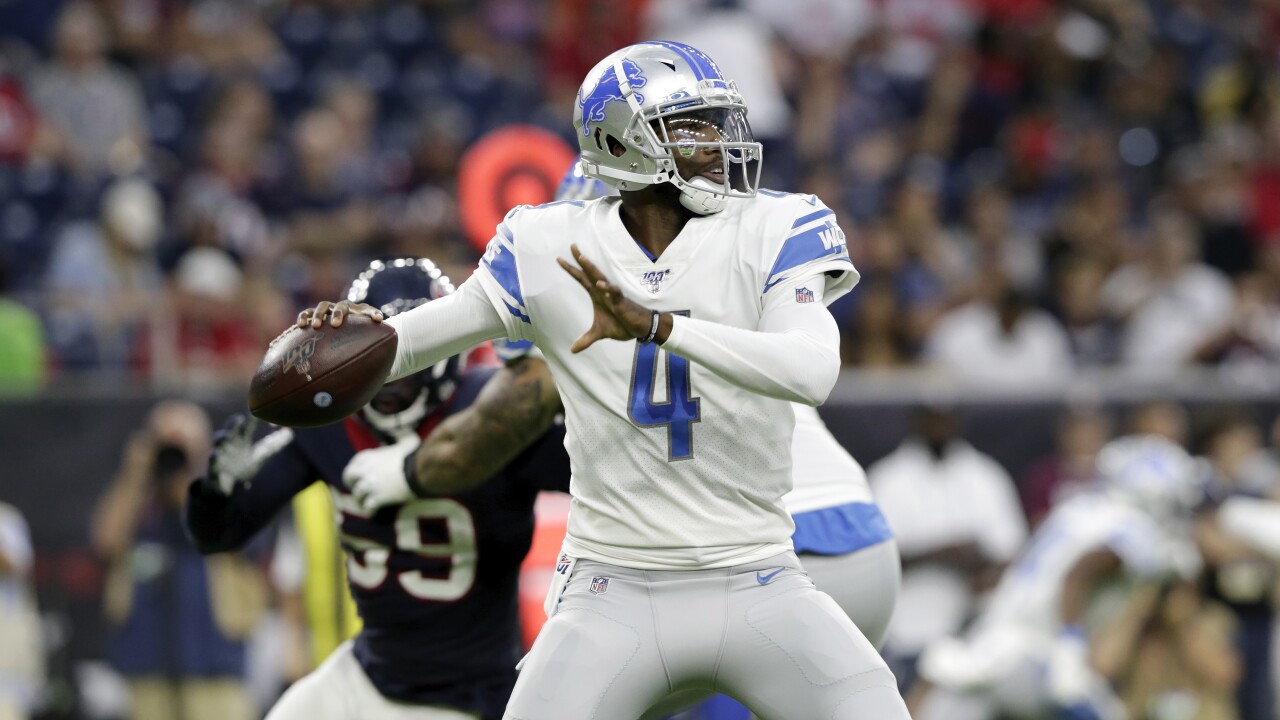 Tim Warner/Getty Images
HOUSTON, TX - AUGUST 17: Josh Johnson #4 of the Detroit Lions looks to pass under pressure by Whitney Mercilus #59 of the Houston Texans in the first quarter during the preseason game at NRG Stadium on August 17, 2019 in Houston, Texas. (Photo by Tim Warner/Getty Images)

(AP) — When the Lions host the Bills, two quarterbacks may be competing for one spot on Detroit's roster.

Josh Johnson and David Fales will likely get a lot of snaps because the Lions are trying to keep Matthew Stafford healthy. Stafford has not stepped on the field during a preseason game this year and coach Matt Patricia refused to say if that would change against Buffalo.

"Everybody is preparing like they should, like we have to go play a game," Patricia said. "It's the only way to go through those mental reps to get ready to go."

The Lions have a sense of urgency to figure out their situation behind Stafford because Tom Savage was signed to be his backup but is in the NFL's concussion protocol.

Josh Allen gets what's expected to be his final preseason opportunity to oversee the Bills' new-look offense, with running backs LeSean McCoy and Frank Gore expected to split most of the duties through the first half.

The second-year quarterback is coming off an efficient outing in which he went 9 of 11 for 102 yards and engineered two scoring drives in a 27-14 win at Carolina.

One focus will be a retooled offense line and whether rookie Cody Ford will start at right guard or right tackle. The line, however, will be missing center Mitch Morse, who has spent the past 3 1/2 weeks in the concussion protocol. Rookie tight end Dawson Knox is expected to make his preseason debut after recovering from a hamstring injury. The Bills are depleted at the position, with projected starter Tyler Kroft expected to miss the start of the season recovering from a broken foot.

Buffalo's defense, which returns mostly intact, seeks to continue what's been a smothering performance, having allowed a combined three field goals in the first half of its first two preseason games.