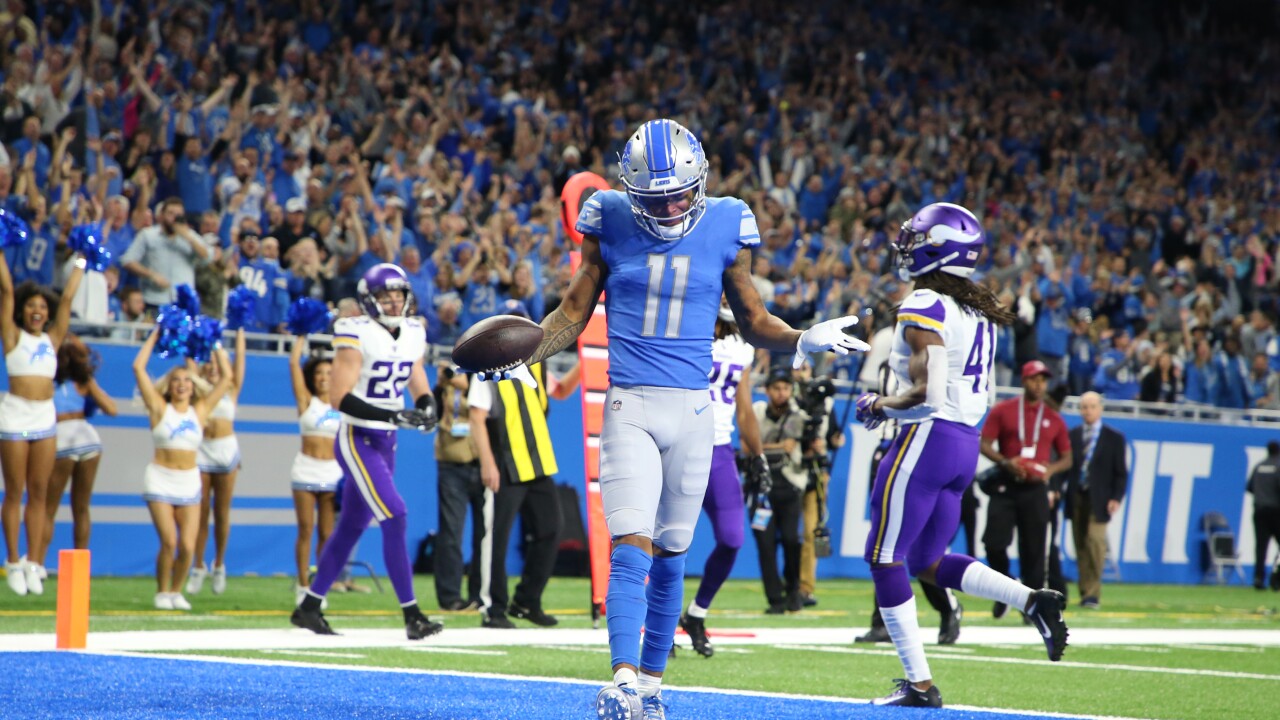 DETROIT (AP) -- The Minnesota Vikings were so confident in Kirk Cousins they called for a deep pass, instead of a more conservative run, to seal a victory against the Detroit Lions.

He validated the gutsy decision.

Cousins connected with Stefon Diggs on a 66-yard pass from deep in his territory with two-plus minutes left after matching a career high with four touchdown passes, leading the surging Vikings to a 42-30 win over the slumping Lions.

"That's a play we knew had a chance," Cousins said.

The Vikings (5-2) were able to run almost any play through the air or on the ground to have success against Detroit on Sunday.

Cousins was 24 of 34 for a season-high 337 yards and threw four TDs for a second straight week. He led the Vikings on four straight TD drives starting in the first quarter and ending in the third, going ahead for the first time on a 5-yard pass to C.J. Ham to make it 28-21.

It certainly helped to have the option, or the threat, of handing the ball off to Dalvin Cook.

"They did a great job of running the ball," Detroit coach Matt Patricia said. "They knocked us off the line of scrimmage."

Cook had 25 carries for 142 yards rushing and scored his second TD after Cousins connected with Diggs late in the game.

"We're running the ball, which sets up the play-action pass and gives us a lot more options on offense," Vikings coach Mike Zimmer said. "That's really working for us right now."

Minnesota has won three consecutive games in part because Cousins is making plays to complement one of the NFL's top defenses.

Cousins is the first QB in league history to throw for at least 300 yards with a 130-plus passer rating in three straight games.

"We've always known we had a ton of talent of offense," said tight end Kyle Rudolph, who caught Cousins' fourth TD pass. "It was just a matter of using it and getting everybody involved."

Jones became the first Lions player in the Super Bowl era with four receiving TDs in a game and joined Jerry Rice and Sterling Sharpe as the only players in the league since 1950 to catch four TD passes in two games.

"Marv's a true pro," Stafford said. "Does everything we ask him."

The Lions (2-3-1) dropped their third straight game after a 2-0-1 start and they probably can't complain too much about officiating in their latest setback. The Lions had some critical penalty calls go against them in a 23-22 loss to Green Bay on Monday night.

Detroit's defense simply couldn't get Cousins off the field.

After Stafford threw a season-high fourth TD with 3:10 remaining, the Vikings ended any comeback hopes.

Vikings offensive coordinator Kevin Stefanski called for Cousins to loft a long pass to Diggs on a second-and-5 from his 30 and the speedy receiver took a 66-yard reception to the Lions 4 to set up Cook's TD run.

"It just shows the trust that Kevin has in Kirk and Diggsy to make a huge play," Rudolph said. "It also takes trust in eight other guys that we're going to protect."

Adam Thielen caught the first of four TD passes from Cousins in the first quarter and the receiver didn't return because of a hamstring injury.

Stafford was 30 of 45 for 364 yards with four TD passes and an interception on his last possession. Jones had 10 receptions for four TDs, matching his best total from 2013 when he played for Cincinnati. Danny Amendola had eight receptions for 105 yards.

Vikings: Thielen had a game-ending hamstring injury in the first quarter after he was hurt while scoring his seventh TD of the season. Zimmer didn't have an update on Thielen's condition after the game.

Lions: RB Kerryon Johnson (knee) and CB Darius Slay (hamstring) were injured during the game and did not return.