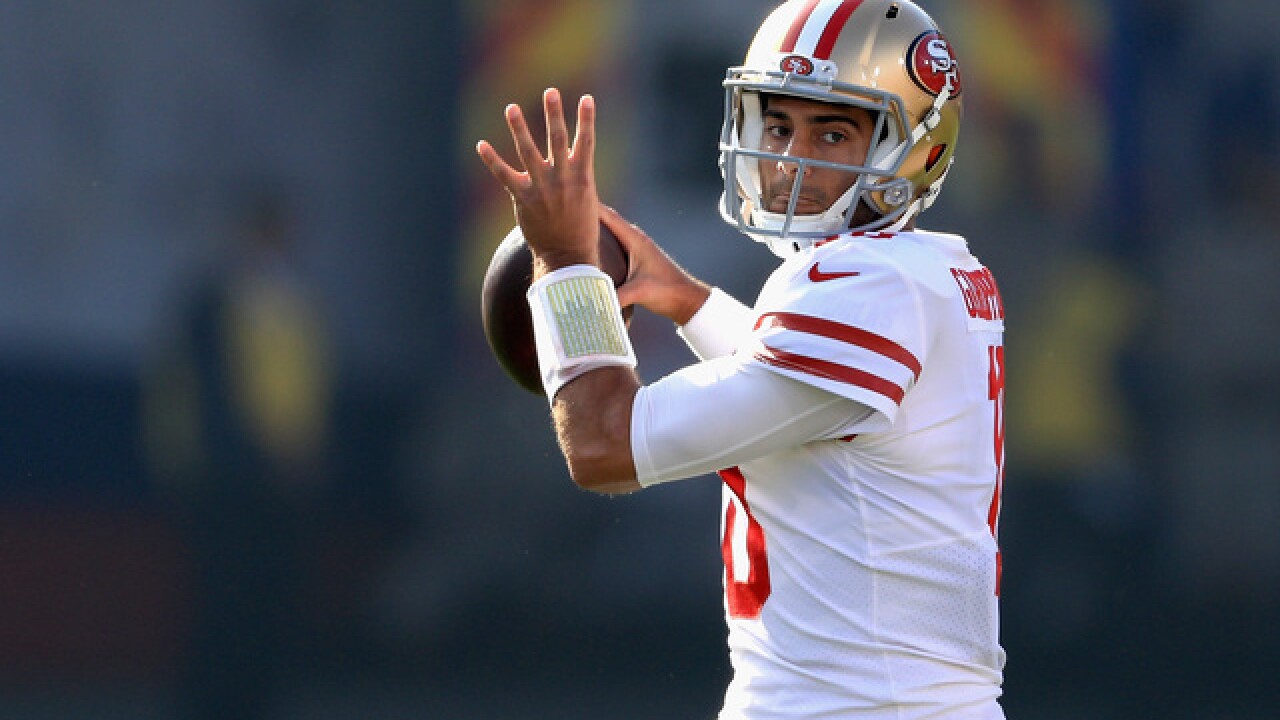 SANTA CLARA, Calif. (AP) — Matt Patricia got an early taste of what Jimmy Garoppolo was capable of doing as an NFL quarterback.

As soon as Garoppolo was drafted in the second round by New England in 2014, he got the chance to match wits with Patricia almost every day in practice as Tom Brady’s backup, while Patricia served as defensive coordinator for the Patriots.

The talents Garoppolo showed on the practice field only got better whenever he got a chance to play in a game, whether it was an exhibition, mop-up duty or in two starts during Brady’s suspension in 2016.

So when Garoppolo became a star after being dealt to San Francisco, Patricia wasn’t surprised at all. He will get a firsthand look at it Sunday as coach of the Detroit Lions (0-1), who visit Garoppolo and San Francisco (0-1).

“There was always something a little bit special about Jimmy in-game,” Patricia said. “Just that extra light just came on and in the game itself you could just see really how special he was as a player.”

After winning his two starts with the Patriots, Garoppolo went 5-0 for San Francisco after a midseason trade last year and earned a $137.5 million, five-year contract.

His first game with the new deal didn’t go so well as he completed less than half his passes and threw three interceptions in a 24-16 loss at Minnesota. He expects a tough task this week, knowing that Patricia likes to change up his schemes, although Garoppolo hopes all that time on the practice field against his defenses pays dividends.

“There’s a couple of little things you remember from over the years and stuff,” he said. “But, Matty P’s a smart coach and I’m sure they’ll have something game planned for us.”

Here are some other things to watch:

The last time San Francisco coach Kyle Shanahan had an offense take on Patricia’s defense came in the Super Bowl in 2017. Shanahan’s Atlanta Falcons took a 28-3 lead before falling apart late and losing 34-28 to the Patriots in OT. With little film of the Lions to go on after just one game with Patricia as coach, Shanahan has looked back at that game for some clues.

“When you have limited tape you have to go back to whoever the coordinator was, where he was the coordinator last, so you can understand all the scheme stuff,” he said. “And that’s what you see. It’s very similar to what they’ve done in New England and they present a lot of challenges that are very tough to deal with.”

Patricia’s tenure in Detroit got off to a rocky start. The Lions’ 48-17 loss to the Jets was their fourth-most lopsided opening game loss in franchise history and worst since falling 45-0 to Washington in 1991. The game got out of hand during New York’s 31-point third quarter, the most points any team has scored in the third since the Rams had 41 against Detroit on Oct. 29, 1950.

“You can’t let one week lead into another week,” Patricia said. “You have to learn, and unfortunately, on a very short week, we have to learn quickly.”

The 49ers were held to one TD on four red zone trips in the opener, continuing a trend from last season with Garoppolo at QB when they scored TDs on 12 of 28 red zone trips. Some of the problems in the opener were self-inflicted, like when Alfred Morris lost a fumble at the 1 in the first half. And Garoppolo threw high to an open George Kittle later in the game. There was also a third-down pass to Pierre Garcon that was broken up in the end zone, leading to another field goal.

“It gets tougher down there, and when you have an opportunity and you miss it you will not have a good day in the red zone,” Shanahan said. “Not going to reinvent the wheel, but we’re going to try and get better at that stuff.”

The Lions had plenty of problems in the opener but one of the biggest might have been a lack of a running game. Detroit finished with a league-low 39 yards rushing on 15 carries. Offseason acquisition LeGarrette Blount lost 3 yards on four carries and rookie Kerryon Johnson had five carries for 17 yards.

The 49ers got strong production from their rookie class in the opener. First-round pick Mike McGlinchey had a solid performance starting at right tackle and then moving to guard after injuries to Mike Person and Joshua Garnett. Second-round pick Dante Pettis stepped in at receiver after Marquise Goodwin got hurt and caught two passes for 61 yards and the team’s only TD. Third-round LB Fred Warner led all rookies with 11 solo tackles and added a forced fumble and pass defensed.