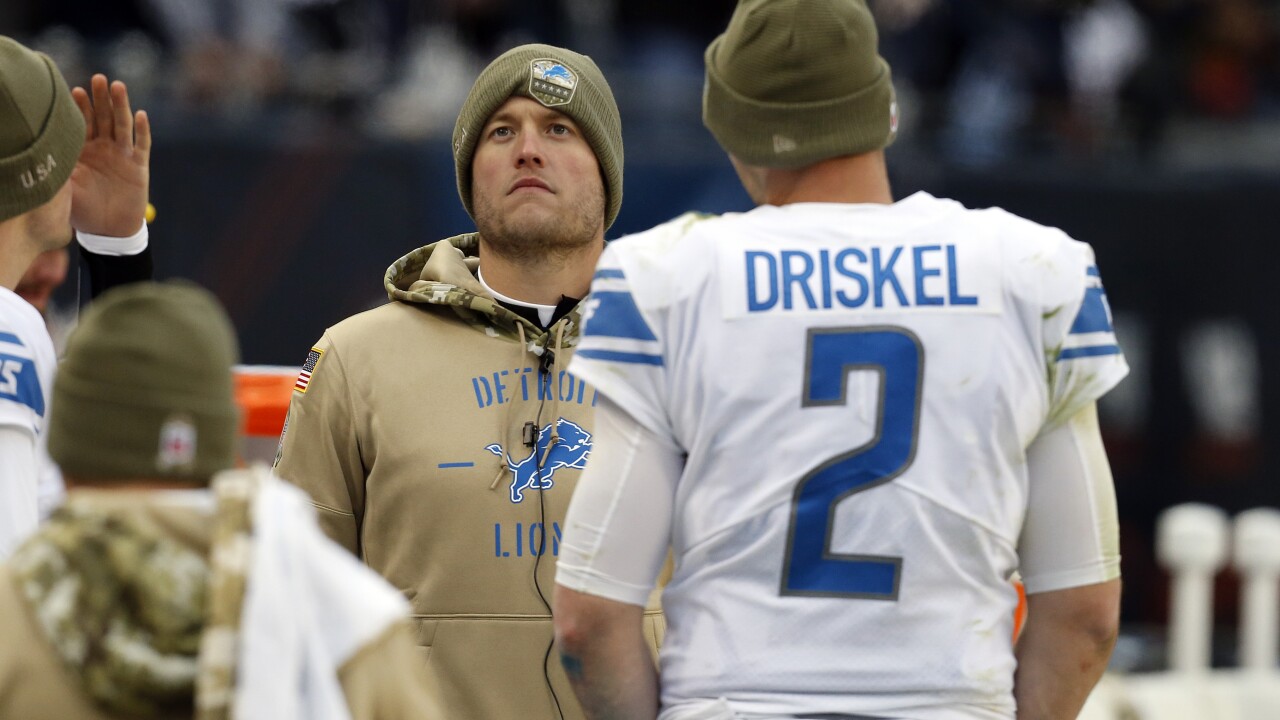 CHICAGO (AP) -- No pads for Matthew Stafford on this Sunday. No helmet, either. Dressed in a hooded sweatshirt and black pants, he watched from the sideline as the Detroit Lions lost again.

This time, there was nothing he could do.

Playing without its starting quarterback for the first time in almost a decade, Detroit rallied in the fourth quarter before falling 20-13 to the Chicago Bears for its fifth loss in six games since its bye week.

Jeff Driskel tried to connect with Marvin Jones Jr. in the end zone on the final play, but his pass was long and it would have been waived off anyway because of a penalty. Subbing for Stafford, Driskel was 27 for 46 for 269 yards and a touchdown in his sixth career start, but he also threw a costly interception.

"Definitely made some plays," Driskel said. "There's a lot of opportunity to improve, when we look back at the tape, but overall made some plays, but not enough to get it done today."

The 31-year-old Stafford was sidelined by hip and back issues, stopping his streak of 139 consecutive starts counting the playoffs. He was listed as questionable coming into the day.

Stafford had been working on another terrific year for Detroit (3-5-1), throwing for 2,499 yards and 19 touchdowns in the first half of the season.

"For him to not be out there, we know it's just a really serious situation," left tackle Taylor Decker said. "As much as we all want him out there, he wants to be out there with us probably even more."

There was no sign of Stafford as workers packed up his locker after the loss. It was unclear when exactly he was ruled out; Decker said they found out Saturday, Driskel said he learned he was starting when he arrived at Soldier Field for the game, and coach Matt Patricia said they made the decision Sunday morning.

"We were hoping by the time we got to today he would be able to do it," Patricia said. "Unfortunately, like I said, it just wasn't safe to put him in that situation. So, the information that we got talking with the doctors, just it wasn't the right thing to do. I'm more concerned about him than I am anything else."

Before Driskel stepped in, the last player other than Stafford to start at quarterback for the Lions was Shaun Hill in the finale of the 2010 season.

Patricia declined to get into any specifics about Stafford's health, or his status for next weekend's home game against the Dallas Cowboys.

"We take it week by week or day by day from that standpoint," he said.

After the Bears (4-5) scored on three consecutive drives to open a 20-6 lead, Driskel found Kenny Golladay for a 47-yard touchdown pass with 5:53 left in the fourth quarter.

The Lions had one last chance when they got the ball back with 1:41 remaining, and they drove down to the Bears 25 before Driskel came up empty as the last few seconds ticked off.

"We got down there, we just fell a little short today," Driskel said.

Driskel also directed Detroit to two Matt Prater field goals in the first half. But he was intercepted by Nick Kwiatkoski on the Lions' first possession of the second half.

The Bears capitalized on the only turnover of the game, with Mitchell Trubisky throwing a 24-yard touchdown pass to Taylor Gabriel for a 20-6 lead with 9:38 left in the third.

Driskel "has a little bit of a different element to him and I thought he was put in a really hard situation and I think he played really tough," Patricia said. "Obviously, the mistakes, but the rest of that poised, went in, did everything he could to try to help the team win."