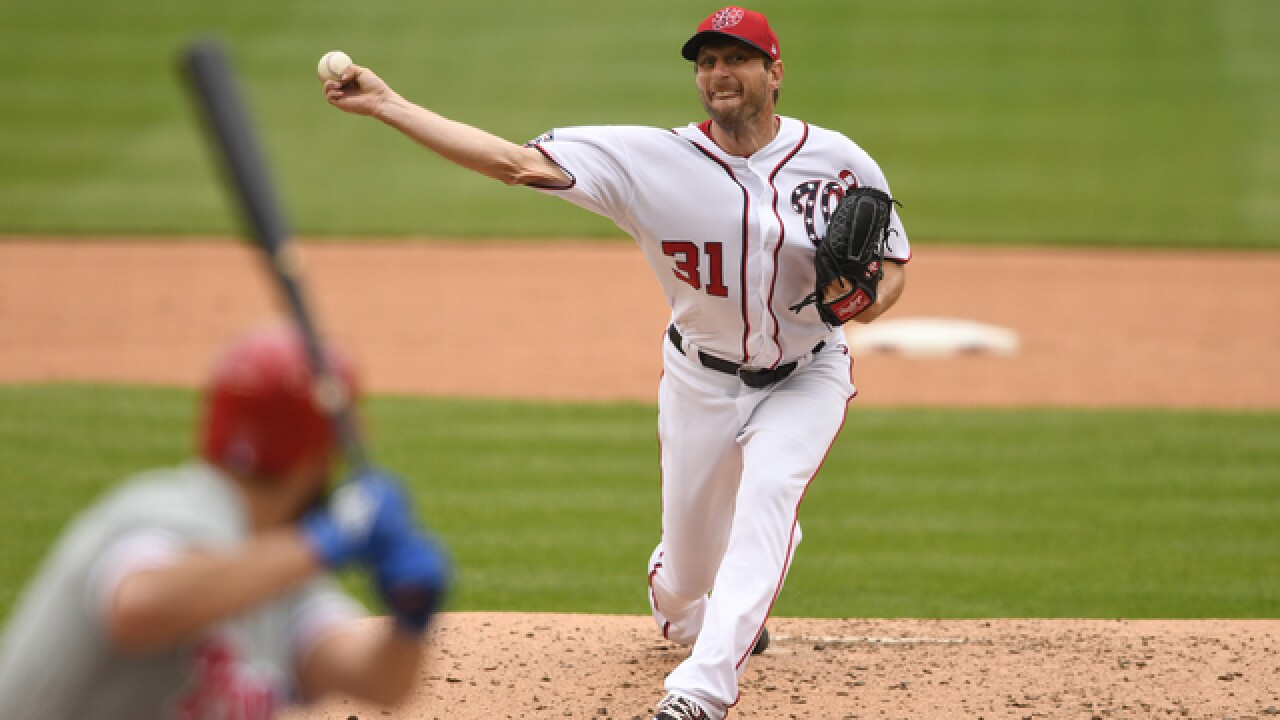 Copyright Getty Images
Mitchell Layton
<p>WASHINGTON, DC - MAY 06: Max Scherzer #31 of the Washington Nationals pitches in the fifth inning during a baseball game against the Philadelphia Phillies at Nationals Park on May 6, 2018 in Washington, DC. (Photo by Mitchell Layton/Getty Images)</p>

WASHINGTON (AP) -- Max Scherzer struck out 15 in only 6 1/3 innings, and the Washington Nationals then rallied for two runs in the ninth to beat the Philadelphia Phillies 5-4 Sunday.

Scherzer and Phillies starter Jake Arrieta, who have combined to win the last three NL Cy Young Awards, kept things close into the late innings before both bullpens faltered.

Philadelphia closer Hector Neris (1-2) took a 4-3 lead into the ninth, but didn't get an out. He walked pinch hitter Pedro Severino with the bases loaded to tie it and Wilmer Difo followed with a winning single.

The Phillies used a five-man infield against Difo, pulling their center fielder -- Difo singled to the vacated spot in center, though his ball likely would've been deep enough to score a run in any case.

Anthony Rendon, who came off the disabled list Saturday, singled home two runs in the eighth to pull the Nationals within 4-3.

Scherzer, who has won the last two NL Cy Young Awards, fanned seven batters in a row at one stretch and got 12 consecutive outs via strikeout from the second to the sixth inning. He gave up a run on five hits and two walks.

Scherzer's effort came on the 20th anniversary of Kerry Wood's 20-strikeout performance against the Houston Astros. Scherzer struck out 20 Detroit Tigers on May 11, 2016.

The Phillies trailed 1-0 before a three-run seventh that began against Scherzer, who left after recording his 15th strikeout on his 111th pitch. It was 1-0 when Scherzer was pulled with one out and a runner on second. Rhys Hoskins' RBI double gave the Phillies a 2-1 lead and he came around to score on Odubel Herrera's third hit of the day.

Maikel Franco added a solo homer in the eighth. Franco was the only Phillies starter Scherzer didn't fan.

Arrieta allowed a run on two hits over six innings. He won the 2015 NL Cy Young with the Cubs.