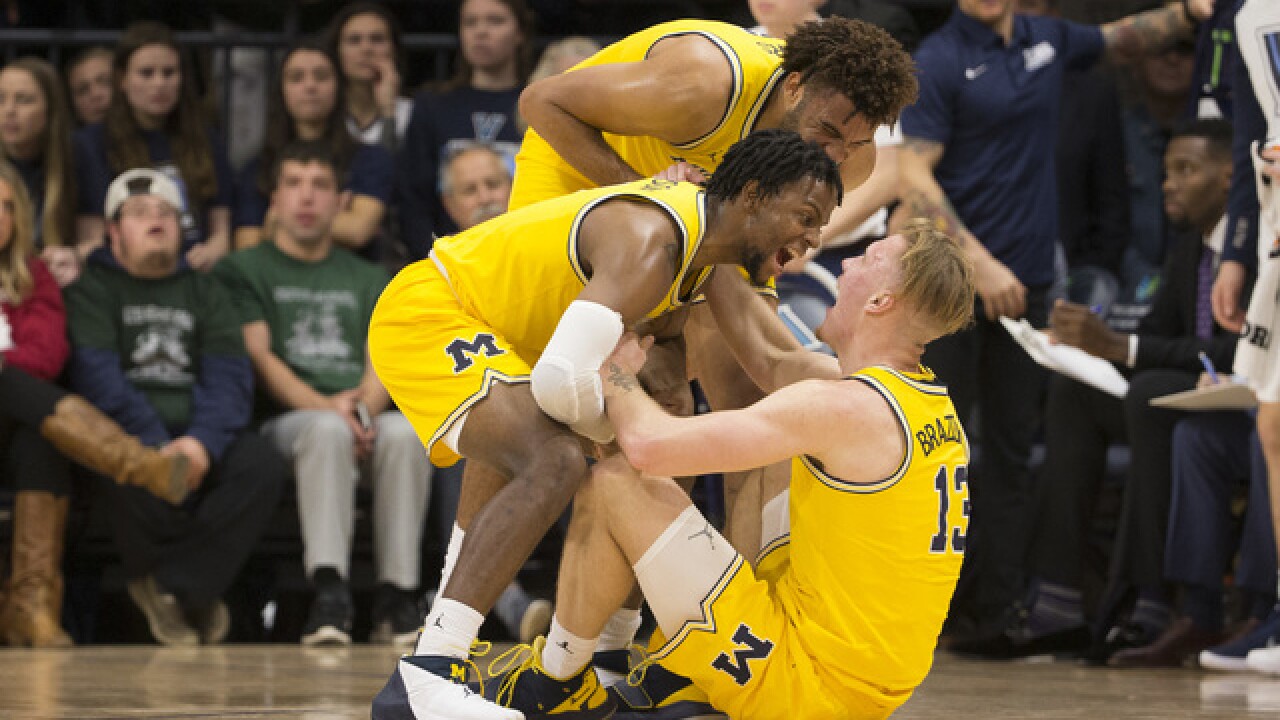 Copyright Getty Images
Mitchell Leff
<p>VILLANOVA, PA - NOVEMBER 14: Zavier Simpson #3 and Isaiah Livers #4 of the Michigan Wolverines celebrate with Ignas Brazdeikis #13 after Brazdeikis made a basket and was fouled in the first half against the Villanova Wildcats at Finneran Pavilion on November 14, 2018 in Villanova, Pennsylvania. (Photo by Mitchell Leff/Getty Images)</p>

Villanova captured its second title in three years with a 79-62 victory over Michigan in April but was completely overmatched in the second game at its newly renovated Pavilion.

Eric Paschall scored 10 points and Phil Booth had nine for the Wildcats (2-1).

The Wolverines (3-0) jumped ahead early and never let up. They led 10-2 less than five minutes in and expanded the lead to 22-8 on Matthews' jumper midway through the opening half. A 17-3 run followed, giving Michigan a 39-13 lead. Matthews' dunk and consecutive 3-pointers from Isaiah Livers and Jordan Poole highlighted the run.

Matthews capped the impressive first half with a steal and layup to send Michigan to the locker room with a 44-17 lead.

Villanova's frustration was evident after Michigan's Zavier Simpson's flagrant foul led to a brief scuffle with Dhamir Cosby-Roundtree near midcourt with 13 minutes remaining and Michigan leading 52-24.

The Wildcats couldn't make any push in the second half, and fans hit the road early.

Neither team looked like the two squads who met in San Antonio seven months ago.

Villanova lost four players who were drafted in the first 33 picks of the NBA draft. AP Player of the Year Jalen Brunson plays for the Dallas Mavericks. Omari Spellman is with the Atlanta Hawks. Mikal Bridges landed in Phoenix after a draft-night trade with the 76ers, and Donte DiVincenzo -- who scored 31 points in the title game -- is with the Milwaukee Bucks.

Michigan lost three of its top four scorers. Moe Wagner, the star big man, was drafted by the Lakers in the first round and is playing in Germany. Duncan Robinson and Muhammad-Ali Abdur-Rahkman graduated.

Bill Finneran, the Villanova alum who was the lead donor for the school's on-campus court that underwent a $65 million face-lift, was honored at halftime.

"The worst game you're going to see here," Finneran told the crowd.

Villanova: Showed its youth, giving coach Jay Wright plenty of teaching points. The Wildcats relied on 3s the first two games, taking more shot attempts from beyond the arc than inside. They couldn't get them to fall from long range, going 3 for 15.