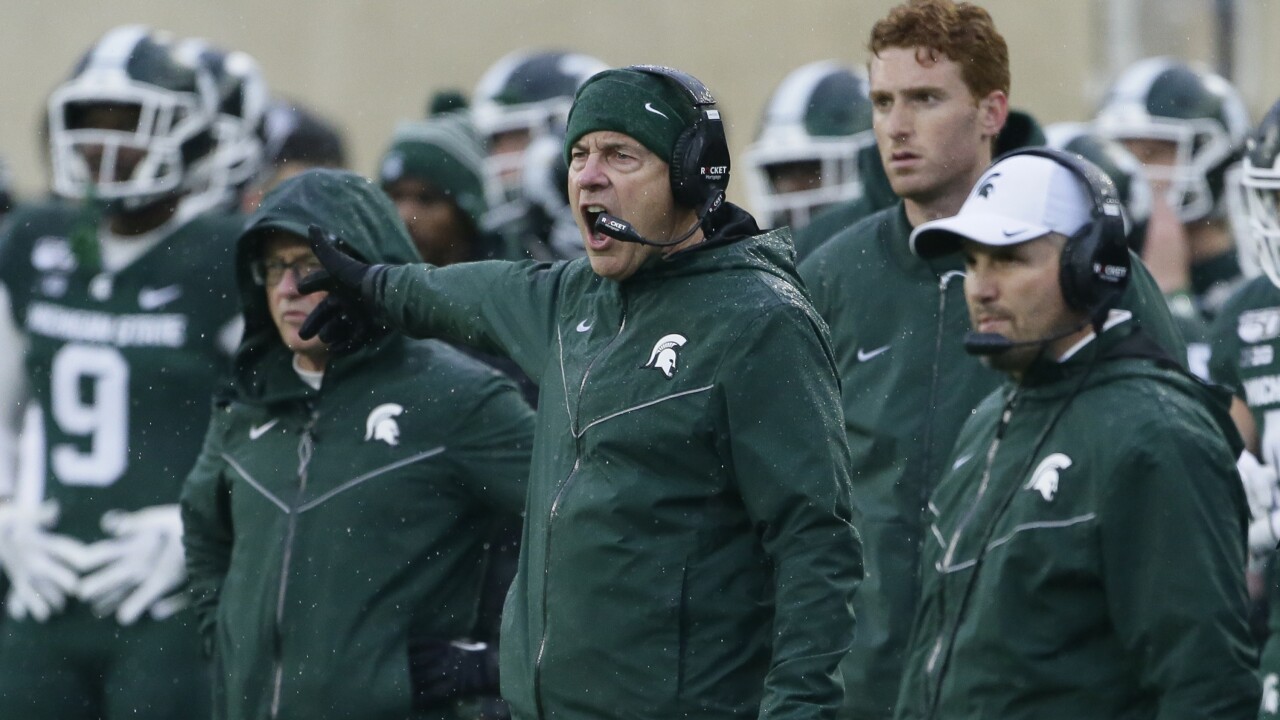 EAST LANSING, Mich. (AP) -- One stat jumps out at Michigan State coach Mark Dantonio when he talks about Illinois.

"Turnovers," Dantonio said. "I think turnovers give you a chance to even up the playing field. You know, when you're plus-three turnovers against Wisconsin, all of a sudden, the game gets a little tight and then they start to believe in themselves. I think they've done a nice job since then of capitalizing on that."

The Illini are plus-12 in the turnover department on the season, and they're a league-best plus-11 in their six Big Ten games. That's a big reason they've managed a .500 record in conference play heading into Saturday's game at Michigan State. A win this weekend would make Illinois bowl eligible for the first time since 2014.

"Guys that have been here for four years and have contributed so much to the growth of our program, that's how you reward good play," coach Lovie Smith said. "A job well done, we feel like let's get to a bowl game. And to have that opportunity, that's what we're talking about now."

Although Michigan State (4-4, 2-3) and Illinois (5-4, 3-3) have similar records, it feels like they're moving in different directions. A bowl appearance would be a big step for the Illini. For the Spartans, that's the bare minimum of what is generally expected under Dantonio. Illinois has won three games in a row, including a huge upset of Wisconsin. Michigan State has dropped three straight and was outscored 100-17 by Ohio State, Wisconsin and Penn State.

The Spartans also lost linebacker Joe Bachie, who was declared ineligible after testing positive for a banned supplement. Michigan State said it would appeal, but he's out for now.

Still, the Spartans are favored by about two touchdowns in this game, which is perhaps a nod to the fact that as bad as Michigan State has looked lately, it was up against particularly tough competition. This week should be a better test of how many problems the Spartans really have.

The Illini are on a three-game winning streak for the first time since winning their first six games of the 2011 season. They have not won four straight Big Ten games since a seven-game streak gave Illinois a conference title in 2001.

This stretch for Michigan State might feel even worse because the Spartans had open dates before and after the Penn State game. So Michigan State hasn't won since beating Indiana on Sept. 28.

Perhaps this is no surprise, given Illinois' turnover margin, but the Illini also have five defensive touchdowns this season. Illinois has forced 17 fumbles and recovered a remarkable 15 of them.

Linebacker Jake Hansen has forced seven of those fumbles.

Dantonio said this week that center Matt Allen is out with an unspecified injury, and receiver Darrell Stewart would not play this weekend either. Stewart is Michigan State's leading receiver with 47 catches for 694 yards.

With Michigan State's offense sputtering, quarterback Brian Lewerke's play has come under scrutiny. He's started every game in 2019, but Rocky Lombardi and Theo Day have played a bit as well.

Lombardi is just 7 for 21 with two interceptions.

"Brian is the guy who gives us the best chance to win now," Dantonio said. "I do think if you're not having success, the option of moving to another guy and giving them another opportunity is the right thing to do in that scenario. But I think he's played well enough for this year to warrant that at this point. It's game to game as we go through this thing. I'm not going to sit there and say never, ever. But he is our quarterback at this time and I still believe in him."