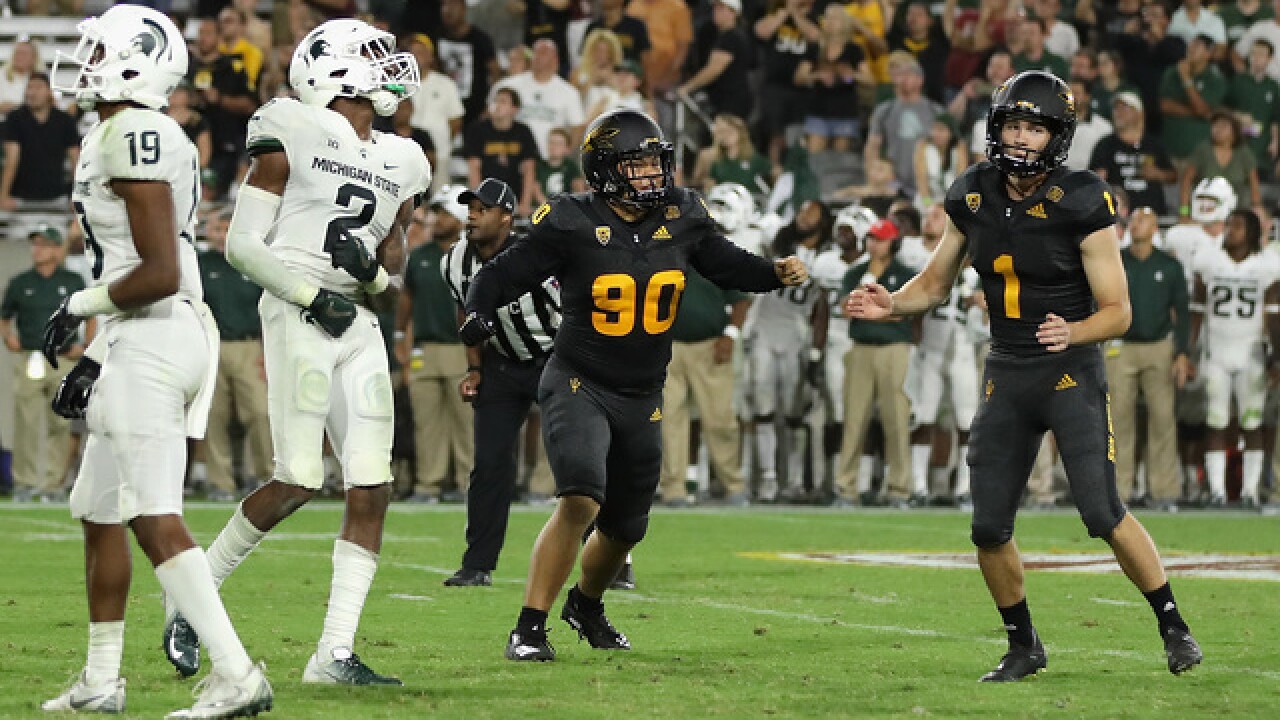 TEMPE, Ariz. (AP) - Arizona State kicked off the Herm Edwards era with a blowout of UTSA. Beating a school from a smaller conference could be expected.

Rallying from a 10-point deficit in the fourth quarter against the nation's No. 15 team? Now that's a statement.

Brandon Ruiz kicked a 28-yard field goal as time expired and the Sun Devils notched a marquee win early in Edwards' tenure, knocking off No. 15 Michigan State 16-13 on Saturday night.

"When you speak to the players, winning always justifies what you do," Edwards said. "When you win, they continue to buy in."

Edwards' hire raised a few eyebrows when Arizona State lured the former NFL head coach back to the sideline after eight years in a television studio. Two weeks into his first season in the desert, the Sun Devils (2-0) have shown they could be in the Pac-12 South title conversation - and possibly more.

Arizona State routed UTSA 49-7 in its opener and faced a much bigger challenge against Michigan State. The Sun Devils never flinched, relying on their defense to keep the game close before scoring 13 points in the fourth quarter.

Manny Wilkins missed some deep throws early, but found his mark when Arizona State needed him most. He hit N'Keal Harry on a 27-yard touchdown early in the fourth quarter and orchestrated the drive to set up Ruiz's winning kick, finishing with 380 yards passing.

Arizona State is 10-0 against Big Ten teams in Tempe.

"In that second half, we knew we wanted to get downfield and we started hitting some shots," said Wilkins, who completed 30 of 48 passes. "It paid off."

Michigan State (1-1) had a hard time shaking Utah State to win its opener by seven. The Spartans had a similar problem with Arizona State after three drives inside the Sun Devils 10 resulted in two field goals and an interception.

Brian Lewerke, who played at nearby Pinnacle High School, threw for 314 yards and a touchdown for the Spartans, who are 1-13 in regular-season games out West.

"One loss doesn't mean the end of everything," safety Khari Willis said. "It's a non-conference loss, but it's not supposed to feel good."

Michigan State had some success with its ball-control offense in the first half, twice driving inside the Arizona State 5-yard line. The Spartans came away with three points.

They were set to go for it on fourth-and-1 from the Sun Devils 14 on one drive, but had to settle for Matt Coghlin's 37-yard field goal after a false start. The next drive ended when Lewerke had a tipped pass intercepted by Arizona State's Dasmond Tautalatasi in the end zone.

Michigan State opened the second half with another good drive, reaching the Arizona State 7. It resulted in Coghlin's second field goal, from 28 yards, after Lewerke tripped on a lineman's foot.

The Spartans finally found the end zone late in the third quarter, when Lewerke threw under pressure to Cody White, who fought off a defender for a 31-yard touchdown to put Michigan State up 13-3.

The Sun Devils had a hard time sustaining anything on offense in the first half, plagued by seven negative-yardage plays.

Ruiz hit a pair of field goals to pull Arizona State to 13-6 and the Sun Devils needed two plays to cover 65 yards on the Wilkins-to-Harry touchdown drive.

"We lost a little leverage on them," Michigan State linebacker Joe Bachie said.

Arizona State has opened its first season under Edwards 2-0 and could move into the AP Top 25 after grinding out a win over a ranked team.

Michigan State might find itself outside the Top 25 after struggling to beat Utah State and losing to the Sun Devils.

Harry is one of the nation's best receivers, so defenses naturally pay extra attention to him. The junior still found a way to impact the game, outdueling a defensive back for the tying touchdown and drawing a pass interference call on third-and-10 on the final drive. He finished with six catches for 89 yards.

"You can cover him for a while but eventually he's going to make a play," Edwards said.

Michigan State has a bye week before opening Big Ten play at Indiana on Sept. 22.