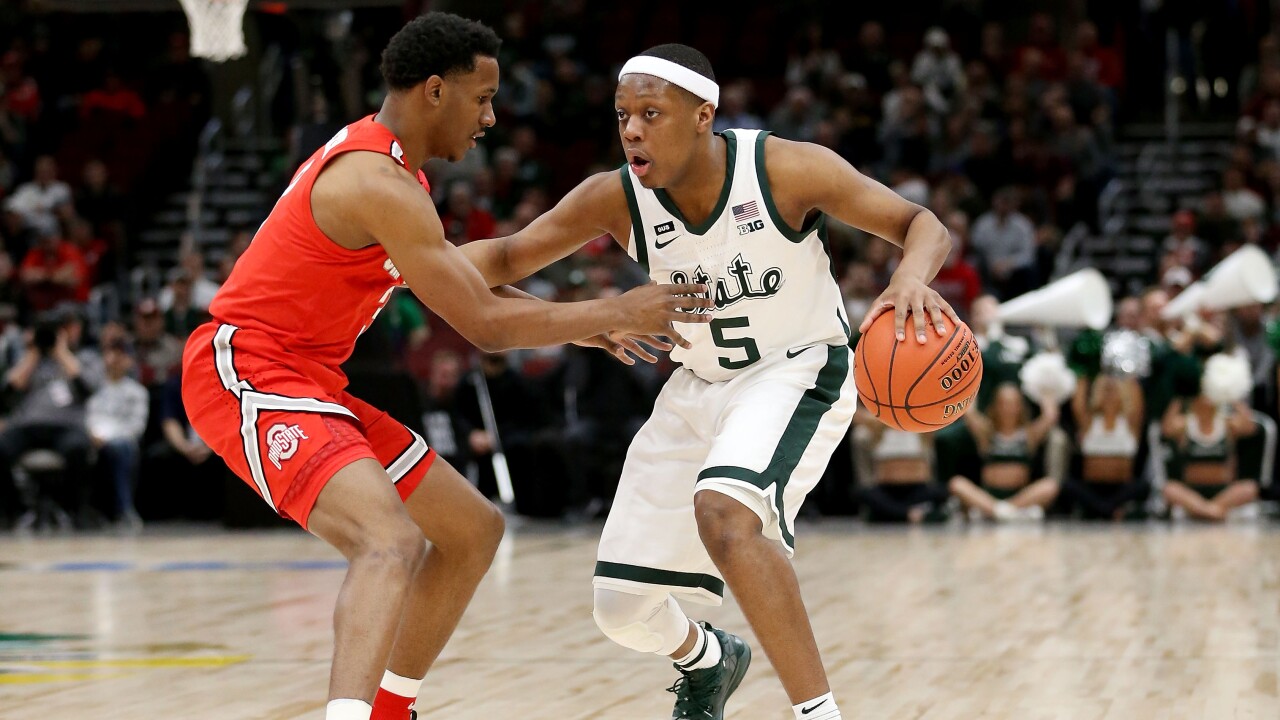 Dylan Buell/Getty Images
CHICAGO, ILLINOIS - MARCH 15: Cassius Winston #5 of the Michigan State Spartans dribbles the ball while being guarded by C.J. Jackson #3 of the Ohio State Buckeyes in the first half during the quarterfinals of the Big Ten Basketball Tournament at the United Center on March 15, 2019 in Chicago, Illinois. (Photo by Dylan Buell/Getty Images) 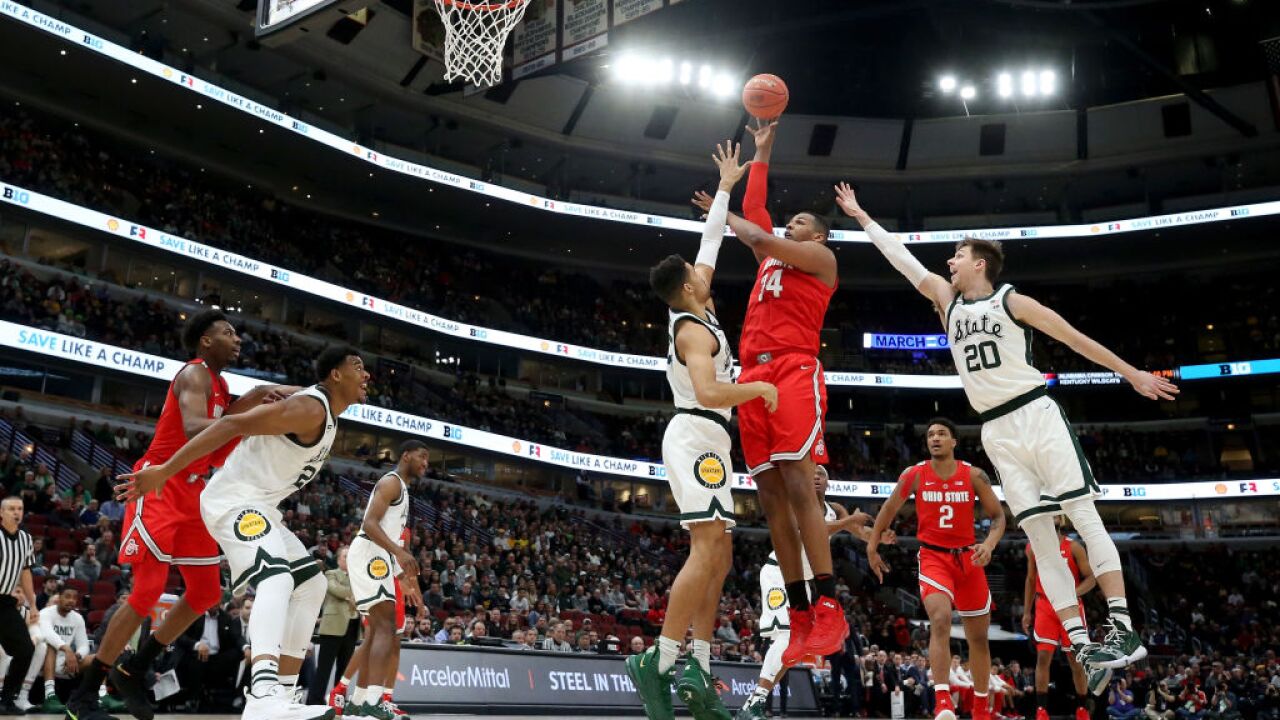 CHICAGO (AP) -- No. 6 Michigan State has its sights set on a sixth Big Ten Tournament championship and a deep NCAA run. The Spartans are off to a good start.

Cassius Winston scored 18 points, Foster Loyer provided a lift off the bench with a career-high 14 points, and Michigan State gave Hall of Fame coach Tom Izzo his 600th career win, a 77-70 victory over Ohio State in the Big Ten Tournament quarterfinals on Friday.

The Spartans (26-6) pulled away in the second half for their third win over the Buckeyes (19-14) this season and will meet the Nebraska-Wisconsin winner in the semifinals on Saturday.

As for Izzo and his milestone?

"They asked me what that means," he said. "And I said, it means good things. You're getting old, and you're 600 shy of Mike Krzyzewski and Jim Boeheim. It keeps you humble and it makes you realize you haven't accomplished that much yet."

With a 600-231 record, seven Final Fours and an NCAA championship, Izzo has accomplished quite a bit in 24 seasons. But he's actually more than 800 wins shy of Krzyzewski and Boeheim.

Either way, Winston called it "an honor" to be a part of Izzo's milestone victory.

"He does a lot of great things, especially behind the scenes, so to be able to get him accolades like that is rare," he said. "A lot of people don't do that."

Winston, the Big Ten Player of the Year, had seven rebounds and five assists.

Loyer nailed 4 of 5 3-pointers in 18 minutes after making just 4 of 20 during the regular season.

The freshman guard's previous best was 10 points against Green Bay on Dec. 16, and he had not played more than 12 minutes in a game. But he scored nine points in the first half and hit some key shots down the stretch on Friday.

The Buckeyes lost for the fifth time in seven games, though coach Chris Holtmann expects an NCAA invitation.

Keyshawn Woods scored 16 points for Ohio State, and Andre Wessson had 14. But his brother Kaleb Wesson fouled out with seven points and three rebounds midway through the second half.

Ohio State went on an 8-0 run early in the second to grab a 40-38 lead. But the Spartans responded by scoring nine straight, with Loyer hitting a 3 and pull-up jumper to make it 47-40 with just under 15 minutes left.

"Your self-confidence is something you can't really lose or you're going to struggle a little bit," Loyer said. "I know I've put the work in to put myself in a position to succeed, to see a few go through was just a little bit of gratitude to know my hard work's paid off."

A 3 by Kenny Goins and a layup by Aaron Henry made it 56-46 midway through the half.

Kaleb Wesson fouled out with 9:42 left when he bumped Winston going for the loose ball after missing a shot for Ohio State.

It was 61-49 when Henry threw down an alley-oop dunk off a long feed from Winston, drawing a roar from a large contingent of Spartans fans. Michigan State led by as many as 21 before going cold over the final four minutes, allowing the Buckeyes to trim the margin.

Nick Ward had eight points in 14 minutes for Michigan State after missing five games because of a broken left hand. He checked in just over four minutes into the game, promptly hit a short jumper and made 3 of 4 shots overall. Ward came in averaging 15.1 points and 6.7 rebounds per game.

Ohio State: The Buckeyes can feel better about their NCAA Tournament hopes thanks to their win over Indiana on Thursday.

Michigan State: The Spartans took a while to get rolling. But they sure looked good once they did. If they keep this up, a No. 1 seed in the NCAAs might be in reach.

Michigan State: Plays Wisconsin in the semifinals on Saturday.