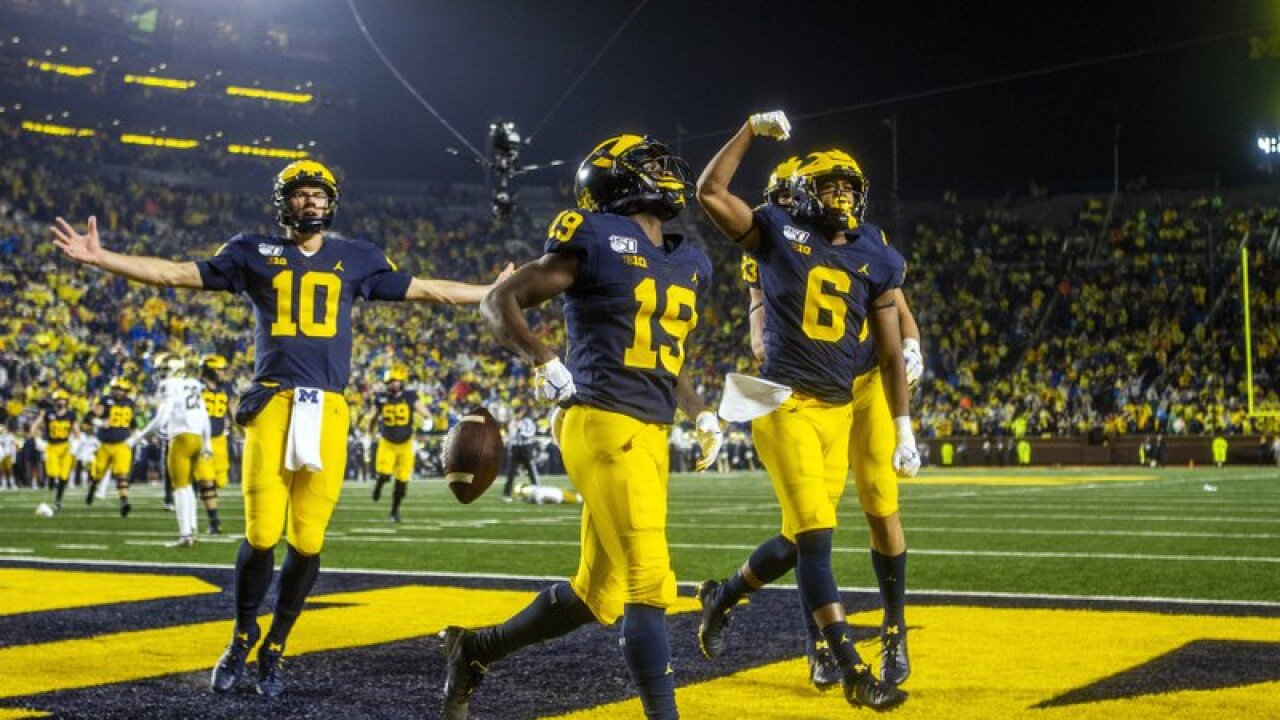 ANN ARBOR, Mich. (AP) — Michigan receiver Mike Sainristil made the most of his opportunity in perhaps the biggest win of the Jim Harbaugh era at the school.

If his family hadn’t fled Haiti, his life likely would be much different.

“I am glad we left because in America, you have more chances to have a better life,” his father, Carlot Sainristil, said Monday night in a telephone interview. “If he was in Haiti, he would not be able to do this. We don’t have football in Haiti. We have soccer, real football.”

Real threats pushed Carlot Sainristil, his wife and their two young sons out of the Caribbean country.

Mike Sainristil’s stay on the island was short.

“My parents left when I was 7 months old,” the 19-year-old freshman said.

His father was the newsroom director at a Haitian radio station, which received telephone threats as did other radio stations following the country’s presidential election in 2000. Carlot and Raymonde moved their family to the Boston area, where he father resumed his radio career and Mike grew up to become the state’s top high school football player last year.

The 14th-ranked Wolverines went into the season with a trio of talented receivers, and Sainristil was largely overlooked as a potential contributor even though he seemed to perform well last spring.

In a rout over then-No. 8 Notre Dame, no one could miss the relatively diminutive player as he made three receptions for 73 yards and a touchdown.

“Mike really made the most of his opportunity, no question,” Harbaugh said. “Made the big third down catch early in the game. That was tough to catch a ball at that point when it was raining in the first half.”

Michigan (6-2, 3-2 Big Ten) may need Sainristil to play a lot of snaps again Saturday at Maryland (3-5, 1-4) if receiver Ronnie Bell can’t return from an injury that took him out of the game against the Fighting Irish.

Sainristil appears to be ready to line up as an option in the passing game for Shea Patterson along with — or perhaps even instead of — experienced receivers Donovan Peoples-Jones, Nico Collins and Tarik Black.

“Really seeing a lot of growth from Mikey lately, the last four weeks, especially in practice,” Harbaugh said. “He has really gained a lot of confidence catching the football and has always been great route running.”

And Sainristil always seems to be in a great mood. His charismatic personality has made him one of the most popular players on the team.

“He’s just a happy guy and you want to be around him,” teammate Luiji Vilain said. “He brings life.”

“I enjoy being around my teammates because I know moments like these last forever when you make the most out of it,” he said. “Feeding off and giving good energy is what I tend to do. I want others to feel my vibe and hopefully we could be on the same page from there.”

Early in the season, Sainristil acknowledged it was difficult to maintain his bright outlook on the football field because he wasn’t playing a large role. Watching, not playing, seemed to hurt his confidence, and he was dropping passes in practice.

He didn’t catch a pass until the fifth game of the season, contributing one reception for 8 yards in a win over then-No. 14 Iowa.

“I just wasn’t really locked in,” Sainristil recalled. “I wasn’t giving my all to the team. I kind of didn’t like the position I was in, but I just had to put that aside to help the team succeed.”

Sainristil started working harder, and earlier, showing up in the 6 o’clock hour to take part in what are called opportunity practices for backups at Michigan. Graduate assistant coach Roy Roundtree, a former standout receiver at the school, encouraged him to work on his hands by catching footballs fired from a JUGS machine.

Sainristil has bounced back and his team has, too.

Slow starts at Penn State and Wisconsin led to setbacks that Sainristil said helped the Wolverines close strong against the Nittany Lions before going on to rout the Fighting Irish.

“Maybe that’s what we needed to realize we could be that good,” he said. “After the Notre Dame Saturday, I think we all know that we’re headed in the right direction.”