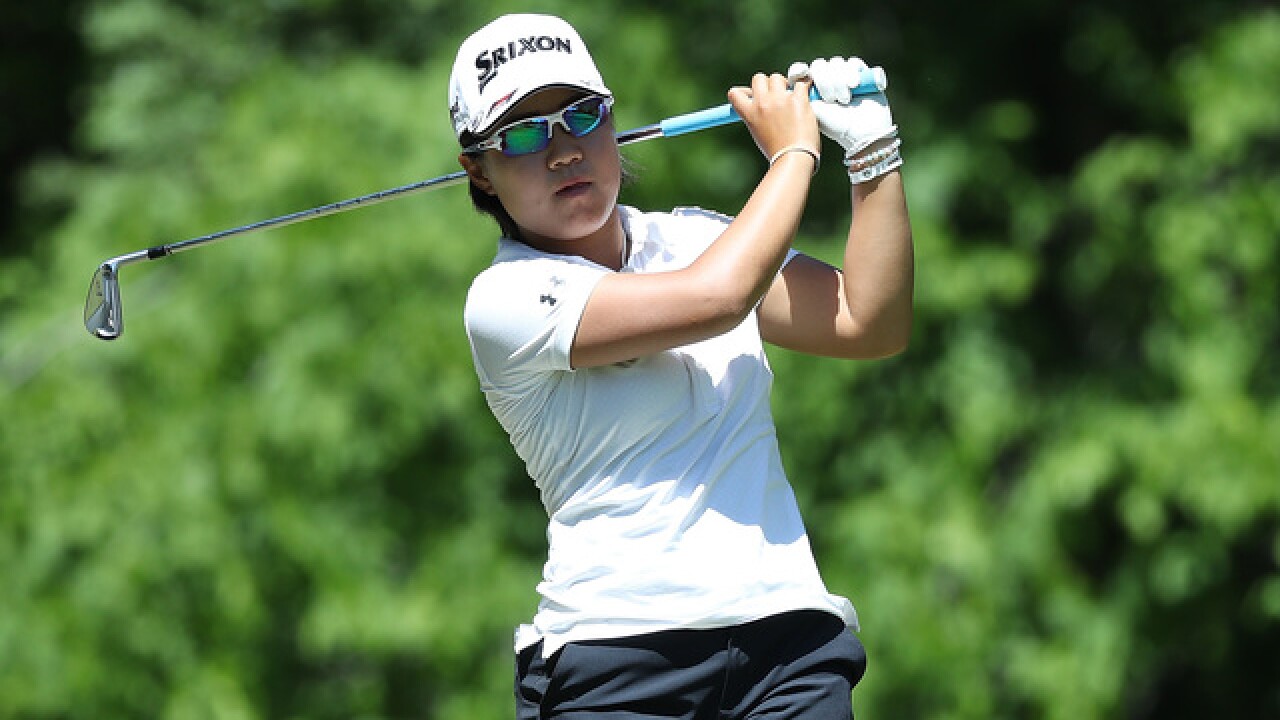 Copyright Getty Images
Leon Halip
<p>ANN ARBOR, MI - MAY 25: Nasa Hataoka from Japan watches her tee shot on the 16th hole during round two of the LPGA Volvik Championship at Travis Pointe County Club on May 25, 2018 in Ann Arbor, Michigan. (Photo by Leon Halip/Getty Images)</p>

ANN ARBOR, Mich. (AP) -- After losing in a playoff last weekend, Nasa Hataoka is making another bid for her first LPGA Tour victory.

Hataoka shot a 4-under 68 on Friday, and the Japanese teenager led by one stroke over Minjee Lee after the second round of the Volvik Championship. Hataoka, who is coming off the first two top-10 finishes of her LPGA career, made seven birdies at Travis Pointe Country Club. She began her round on No. 10, and her best stretch came toward the end, when she birdied Nos. 4, 5 and 6.

Hataoka made the cut nine times in 17 starts as a rookie in 2017, and she has made significant strides of late. She tied for seventh at last month's MEDIHEAL Championship and nearly won a week ago at the Kingsmill Championship in Virginia.

Hataoka finished the second round in Michigan at 9 under. Lee (69) was also solid Friday. Gaby Lopez (68), Jodi Ewart Shadoff (70) and Lindy Duncan (70) were a stroke behind Lee in a tie for third.

Hataoka did not make a single bogey in last week's three-round tournament, and she didn't have any in the first round in Michigan. She finally made a few Friday, but that didn't stop her from taking sole possession of the lead.

"I kind of feel like not really perfect, but I just kind of try to (be) aggressive," she said.

Lee, who lost by one stroke on this course last year, is in contention again.

"I guess the fairways are pretty generous and I think the greens are a little bit on the trickier side to read," Lee said. "As long as your iron shots are pretty solid, I think you're going to be in good position around this golf course."

Lee birdied the first two holes, and the only blemish on her scorecard Friday came on the par-5 14th. After missing the fairway to the right, she hit an aggressive shot out of the rough that went straight toward a water hazard well in front of the green. She settled for a bogey after taking a drop.

"I thought the ball was sitting OK in the rough, but it must have been a bit funny, or underneath it," she said. "I made a mistake. I thought it was good enough to hit 3-wood there."

Lee lost last year in Michigan to Shanshan Feng, but Feng will have some ground to make up in her attempt to repeat. She shot 69 on Friday but is still eight strokes behind the leader.

Ariya Jutanugarn was 6 under after a second consecutive 69.

Lopez made only six pars in the second round, tied for the fewest of the day, but her eight birdies and four bogeys put her near the top of the leaderboard.

"It was a little bit of an up and down," she said. "There's so many opportunities out here to make birdie, that the most important thing to do is just to be patient, to be in the moment and not to get ahead of yourself. I think I came back from a couple mistakes that I did."

NOTES: In contrast to Lopez, Brittany Lincicome parred all 18 holes Friday and made the cut at 1 under. ... Paula Creamer (71) triple bogeyed the par-4 13th. She followed that with an eagle on the very next hole but missed the cut by a stroke.