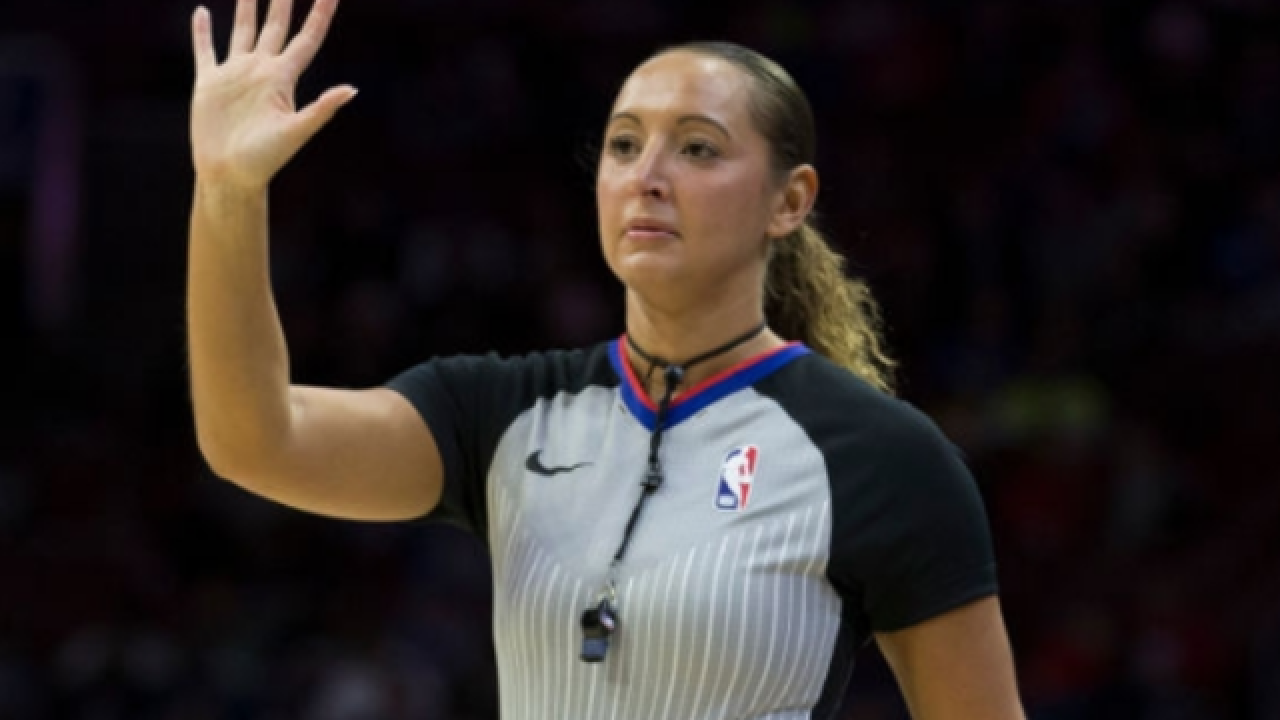 Copyright Getty Images
Mitchell Leff
<p>PHILADELPHIA, PA - OCTOBER 29: Referee Ashley Moyer-Gleich #75 in action during the first quarter of the game between the Atlanta Hawks and Philadelphia 76ers at the Wells Fargo Center on October 29, 2018 in Philadelphia, Pennsylvania. The 76ers defeated the Hawks 113-92. (Photo by Mitchell Leff/Getty Images)</p>

Ashley Moyer-Gleich is eight years removed from playing in the NCAA Division II tournament. Natalie Sago officiated her first game six years ago, and the players were sixth-grade girls.

They're in the NBA now -- as part of one of the most elite sororities in the game.

Moyer-Gleich and Sago are among five officials who were promoted Thursday by the NBA to full-time status, making them the fourth and fifth women in league history to have that designation. They join former league refs Violet Palmer and Dee Kantner and current official Lauren Holtkamp as women to get formally hired.

"It's difficult not to say Ashley and Natalie aren't the second and third `women referees' being added to the staff," NBA vice president and head of referee development Monty McCutchen told The Associated Press. "But true equality comes when they're just going to be `referees' on our staff. And that's what we're really trying to achieve, this sense that their work warrants their advancement."

The league also promoted Mousa Dagher, Matt Myers and Phenizee Ransom to the full-time level. Dagher further adds to the diversity of Thursday's moves -- he was born in Syria and moved to the U.S. as a 15-year-old in 2006. Myers spent more than a decade in the G League, and Ransom was there for six seasons.

"It's such a momentous experience, to be working toward being part of the top of your craft and joining our staff," Holtkamp said. "I'll never forget getting the phone call and the same will be true for all five of these referees. And Natalie and Ashley, to know they're joining our staff full-time, I'm beyond excited for them and what this means professionally and personally."

Moyer-Gleich and Sago have both worked five NBA games this season -- three regular season, two preseason. That was enough to confirm what McCutchen and other league officials have known for some time.

"It's been unreal, really," said Sago, whose father has been a referee for more than 30 years. "It's just been a very fast path for my officiating career and I wouldn't change it for the world. I've had great role models, Lauren being one, and other NBA referees at these camps who kept saying, `You've got something.' And all of a sudden, bam, I got the phone call and it's such an honor."

Sago got the call from NBA senior vice president and head of referee operations Michelle Johnson as her flight from one G League game to another earlier this month was taking off. She had to wait nearly two hours before she could call her father to give the news.

Her rise was also rapid: She got spotted at a Division III game in St. Louis -- a Sunday afternoon game before about 15 fans -- about three years ago and invited to an NBA camp.

"It's very unique, how quickly it's happened," Sago said.

There will be a day when Moyer-Gleich, Sago and Holtkamp -- along with any other women who follow them, something that seems quite likely with 17 other women working games in the G League this season -- will get judged like any other referee, without the `female' disclaimer.

They all know that day isn't here yet.

"Everything that we do, that's in comparison to the same exact thing our male counterparts might do, will be magnified," said Moyer-Gleich, a standout player at Millersville University in her native Pennsylvania before starting her ref career. "What we do will be held under a microscope. Right, wrong, indifferent, I have come to peace with that."

The NBA has made hiring more women throughout the league a top priority, and that extends to the refereeing roster. Over the summer, NBA Commissioner Adam Silver said it was "a bit embarrassing" that the league currently has only one full-time female referee.

"I know that I'm good enough," Moyer-Gleich said. "I know I belong there."

McCutchen and other top NBA executives agree. He stressed that there was no mandate to hire women. His charge, he said, was to hire the best refs, period.

"I am committed that this be egalitarian," McCutchen said. "If you can do the work, if you can stand up to the standards of our league but not the standing of our players and apply the rules, that should be open to any package it shows itself in."