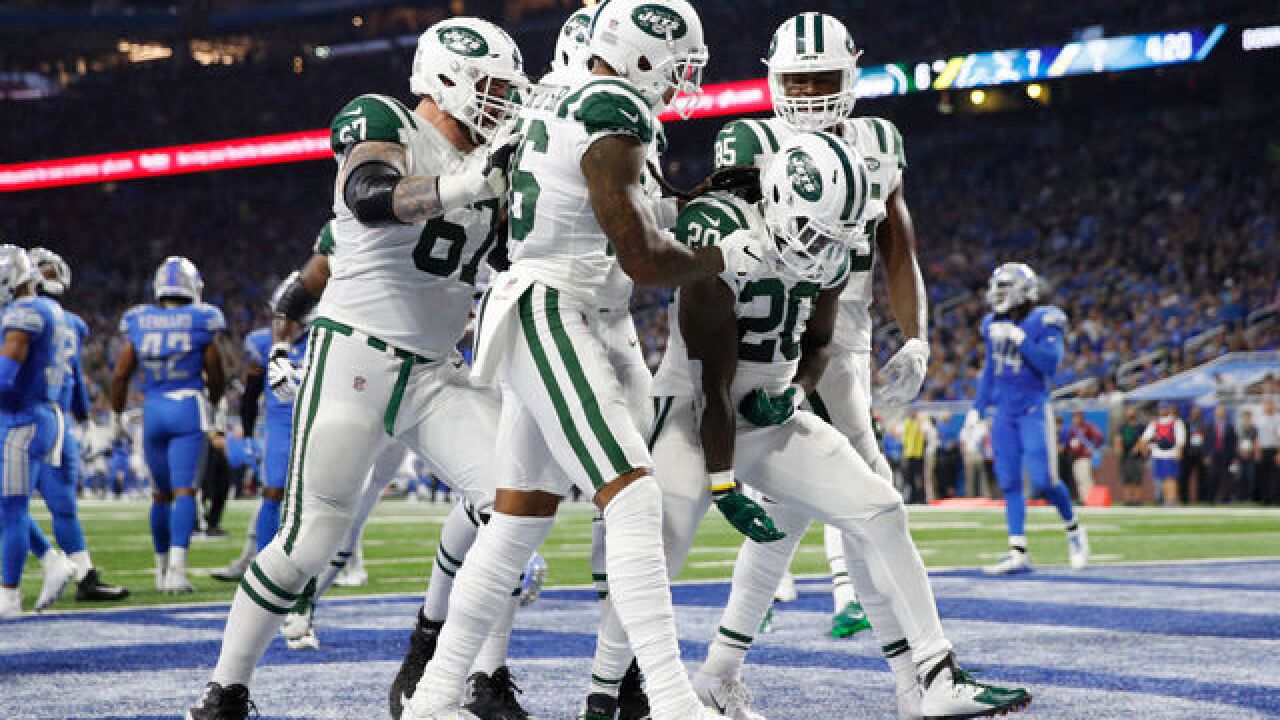 Image copyright 2018 Getty Images. All rights reserved. This material may not be published, broadcast, rewritten, or redistributed.
Joe Robbins
<p>DETROIT, MI - SEPTEMBER 10: Isaiah Crowell #20 of the New York Jets celebrates a touchdown in the first half against the Detroit Lions at Ford Field on September 10, 2018 in Detroit, Michigan. (Photo by Joe Robbins/Getty Images)</p>

Sam Darnold made a stellar debut despite throwing a pick-6 on his first NFL pass and the New York Jets intercepted five passes while routing the Detroit Lions 48-17 in their season opener Monday night.

The 21-year-old Darnold became the youngest quarterback to start a season opener since the 1970 AFL-NFL merger, and he got off to an inauspicious start. Quandre Diggs intercepted his ill-advised lob down the left sideline on the first play from scrimmage and returned it 37 yards for a touchdown 20 seconds into the game.

The former USC star shook off the rough start by completing 16 of 21 passes for 198 yards and two touchdowns. He helped the Jets set a franchise record for points on the road, surpassing the 47 points they scored in 1967 against the Boston Patriots, and outplayed 30-year-old Matthew Stafford.

Stafford threw four interceptions — one shy of his career high — and left the game briefly in the third quarter after being hit from the front and back. He was mercifully taken out of the game midway through the fourth quarter and replaced by Matt Cassel with Detroit down 31. Stafford was 27 of 46 for 286 yards and a TD pass to Golden Tate early in the third quarter to tie it at 17.

The Jets dominated in all phases. They scored 31 straight in the third quarter to pull away, sending Detroit's fans for the exits and setting off a jolly green party in the Motor City.

It was the highest-scoring third quarter in team history and trailed only the 34-point second quarter the Brett Favre-led team scored in 2008 against Arizona.

New York scored on the ground and through the air, on defense and on a punt return. The Jets could've scored even more in the final minutes but turned the ball over on downs after kneeling to take time off the clock. Darnold flipped the ball to a referee after the final kneel down, and the official gave it right back before shaking the rookie's hand.

It was a miserable coaching debut for Detroit's Matt Patricia. New NFL head coaches dropped to 0-6 in Week 1, with Oakland's Jon Gruden the group's final hope for an opening victory in the Monday nightcap.

Linebacker Darron Lee had two of New York's interceptions, including one he ran back 36 yards for a touchdown in the third quarter. Trumaine Johnson, Morris Claiborne and Jamal Adams also picked off passes in a big opener for the Jets' "New Jack City" secondary.

Late in the game, just before Cassel threw an interception, hundreds of New York fans chanted: "J-E-T-S, JETS! JETS! JETS!" A crew clad in green and white filed into seats in four sections along the New York sideline and appeared to outnumber Detroit fans who stuck around for the bitter end.

Jets: CB Johnson (head injury) and CB Buster Skrine (rib) returned to play after leaving the field with injuries. Johnson was evaluated after he intercepted a pass and fumbled after taking a hard hit from Detroit receiver Kenny Golladay.

Lions: DE Ezekiel Ansah, who has struggled to get and stay healthy, left the game with a shoulder after making four tackles, including a sack. OG T.J. Lang left the game with a back injury. CB Darius Slay returned to play after leaving the field to be evaluated for a concussion.