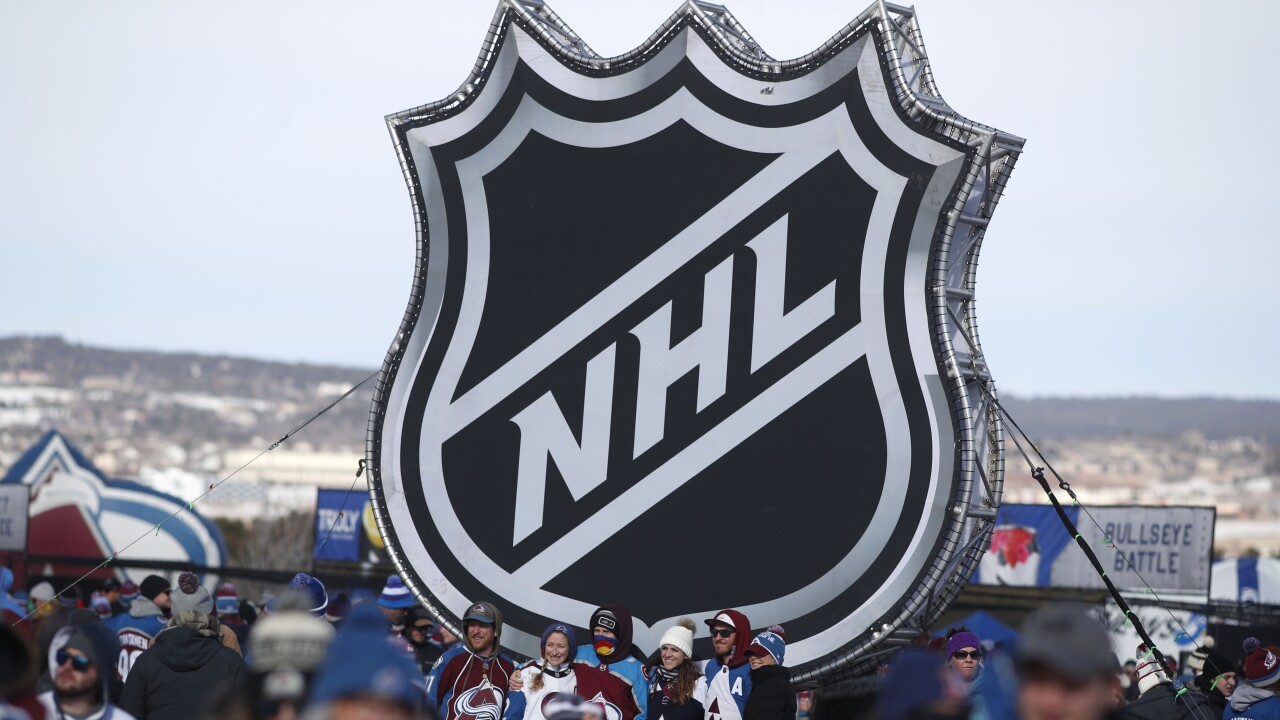 (Copyright 2020 The Associated Press. All rights reserved. This material may not be published, broadcast, rewritten or redistributed.)
David Zalubowski/AP
Fans pose below the NHL league logo at a display outside Falcon Stadium before an NHL Stadium Series outdoor hockey game between the Los Angeles Kings and Colorado Avalanche, Saturday, Feb. 15, 2020, at Air Force Academy, Colo. (AP Photo/David Zalubowski)

It is part of the reason the Columbus captain supports NHL players undergoing daily testing if the season resumes.

“Testing is a must because it’s the only way you’re going to know and feel confident every time you step on the ice that everyone is in the same boat as you and you can play the game to the best of your ability,” Foligno said.

The first major North American professional sports league to announce a format for its potential return to competition also has a comprehensive COVID-19 testing strategy. There are screening protocols in place for voluntary workouts and training camp in the hands of individual teams. Deputy Commissioner Bill Daly also said the NHL plans to test all players every day when games start happening.

“We will have a rigorous daily testing protocol where players are tested every evening and those results are obtained before they would leave their hotel rooms the next morning, so we’ll know if we have a positive test and whether the player has to self-quarantine himself as a result of that positive test,” Daly said. “It’s expensive, but we think it’s really a foundational element of what we’re trying to accomplish.”

Each test costs approximately $125, the league says, and Commissioner Gary Bettman estimated 25,000-35,000 will be needed to get through the playoffs — a price tag, he concedes, of “millions of dollars.” But athletes have plenty of concerns about risking their health to get back to work, and regular testing is something players insisted on.

“You need testing at a level sufficient to be confident that you’re going to be on top of anything which might happen,” NHL Players’ Association executive director Don Fehr said. “If that turns out to be daily, and that’s available, that’s OK. That would be good. If it turns out that that’s not quite what we need and we can get by with a little less, that’s OK.”

Infectious disease expert Dr. Amesh Adalja of the Johns Hopkins University Center for Health Security isn’t quite sure how often athletes should be tested to ensure they are virus-free. He said testing in German soccer will help other leagues determine the right frequency, which also depends on the type of quarantine and exposure risks players will have.

While players vary on their general concern about contracting the virus by resuming the season, many seem to be on board with frequent testing.

Teammate Connor McDavid and Toronto captain John Tavares, who are members of the NHL/NHLPA Return to Play committee, deferred to experts on how often players should be tested. McDavid added, “I think you have to get tested in a time like this, and you want to get tested as frequently as you can to catch it right away.”

Daly said one person testing positive for the coronavirus would not necessarily mean another pause for the NHL. Leaguewide testing done daily would allow the isolation of an infected player, coach or staff member before the start of an outbreak.

“If one guy tests positive, I see it as unlikely that other guys don’t test positive, but in assessing everybody I have to believe that they’ll probably find it,” Montreal player rep Paul Byron said. “What would happen if half your team or four or five or six guys test positive at one time?”

League and team officials have stressed they would only use thousands of tests if that number does not endanger the supply for the general public, a concern Adalja broached for all sports. Bettman said medical experts told the NHL that by the time games could resume this summer, 25,000-30,000 would be “a relatively insignificant number.”

Adalja said a league partnering with a national chain for testing could keep it from interfering with the public supply, though it is difficult to predict what availability will be like in late summer. He also said the cost and availability depends on whether the NHL would use more expensive but more reliable PCR tests — the nose swabs — or rapid antigen tests that can have less sensitivity.

Protocols for voluntary workouts and training camps require PCR testing where available, and Daly said the NHL continues to study the potential use of antigen testing.

Part of the decision on which cities host games is the amount of COVID-19 present in the community. Bettman hopes the combination of going to a place with less of it, testing frequently and putting players in a quarantine “bubble” of sorts means it’s less likely for anyone to contract it.

The players putting faith in the league to keep them healthy hope that turns out to be correct.

“Staying on top of everyone is going to be a good challenge for our training staff, and the onus on the players in making sure everyone’s safe,” Carolina captain Jordan Staal said. “It’s going to be different. It’s going to be some interesting hurdles but hopefully if we get back on the ice, I’m sure the guys will find a way to jump through them.”