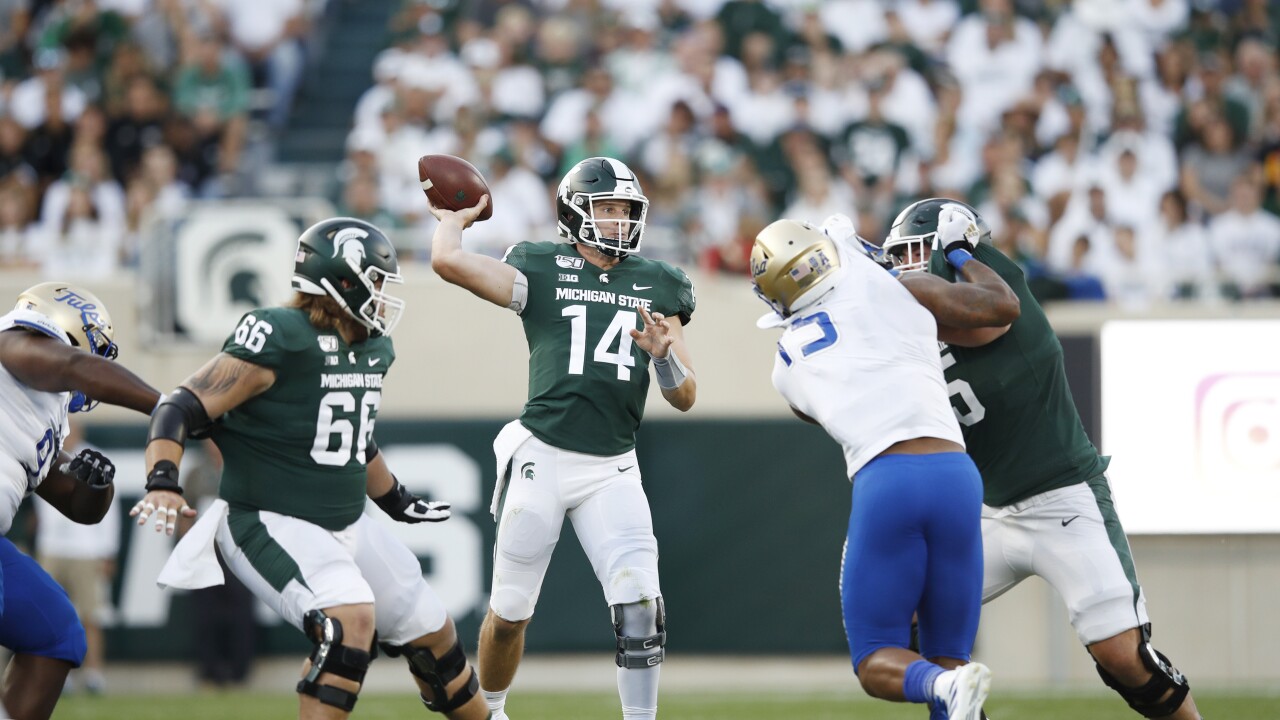 EAST LANSING, Mich. (AP) -- Kenny Willekes recovered two fumbles, including one in the end zone for a touchdown, and No. 18 Michigan State manhandled Tulsa 28-7 on Friday night.

Willekes, back on the field after breaking his leg in last season's Redbox Bowl, was part of a swarming Michigan State defense that held the Golden Hurricane to minus-73 yards rushing. The Spartans (1-0) still had their problems offensively, but that made little difference on this night.

Tulsa (0-1) botched two shotgun snaps in the second quarter -- part of the reason its rushing total ended up so far below zero. One of those loose balls went out of the end zone for a safety.

The touchdown by Willekes came after he and Raequan Williams sacked Zach Smith near the goal line. The ball came free, and Willekes came up with it to put Michigan State up 22-0.

The big question coming into this game was how Michigan State's offense would look after the Spartans scored only 32 points over the final four games of 2018. Coach Mark Dantonio shuffled roles around among his offensive assistants, making Brad Salem the offensive coordinator.

"I thought the play calling was pretty good, but you've got to execute," Dantonio said.

Michigan State got the ball first Friday and capped a penalty-aided drive with a 15-yard touchdown pass from Brian Lewerke to Connor Heyward. Then the defense -- which was No. 1 in the nation against the run last season -- took over.

Tulsa went with Smith, a Baylor transfer, at quarterback over returning sophomore Seth Boomer. It would have probably been a long night no matter who was in. Michigan State was up 25-0 before the Golden Hurricane scored. Smith threw a 28-yard touchdown pass to Sam Crawford late in the second quarter.

"I know Michigan State, especially on the defensive side they're extremely talented," Tulsa coach Philip Montgomery said. "We got in a situation there in the second half where we felt like we had to throw. They knew we had to throw and it was putting us in situations that they were able to take advantage of."

Tulsa: The Golden Hurricane had trouble running and passing, and they didn't help themselves with three first-half turnovers. The final score could have been a lot worse.

Michigan State: The Spartans were never in much danger of losing this one, but in the end, they scored only one offensive touchdown. The offense failed to take full advantage of great field position in that second quarter, and there was some grumbling from fans at Spartan Stadium at various points in the night.

Michigan State was in the Top 25 despite all the concerns about the offense, and this comfortable win isn't likely to threaten that ranking.