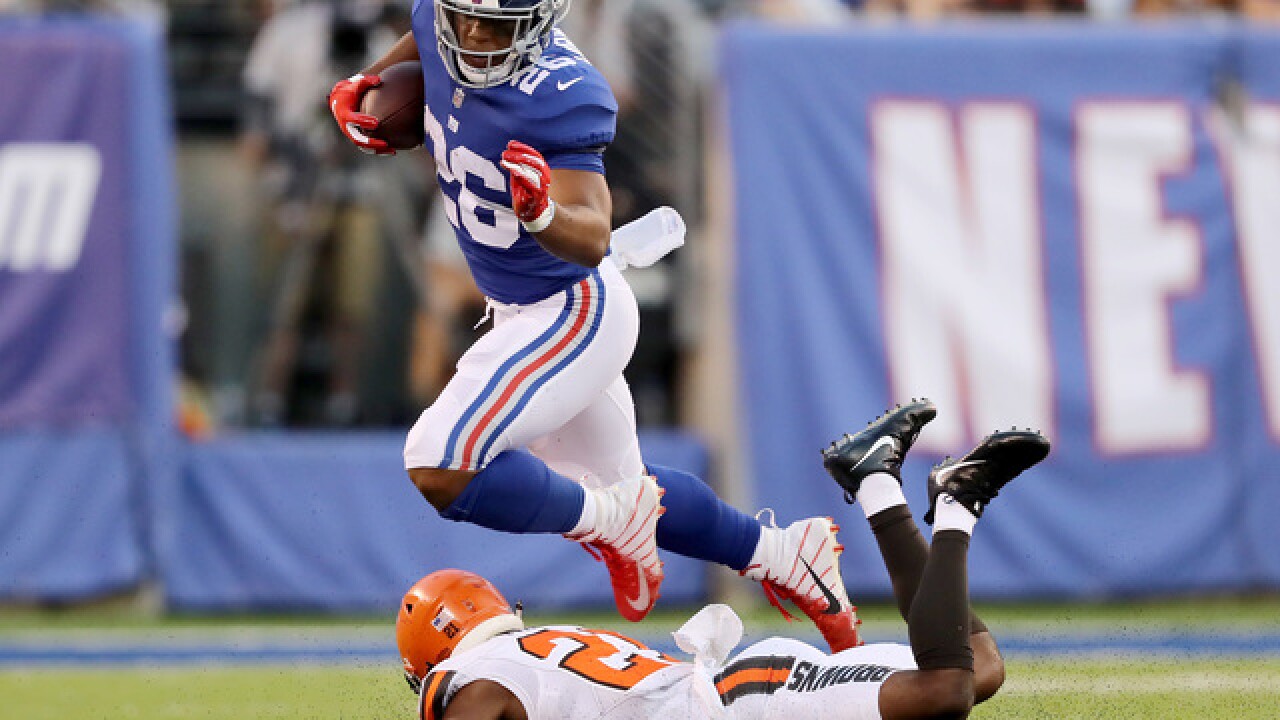 EAST RUTHERFORD, N.J. (AP) -- The New York Giants had a hold-your-breath moment with rookie running back Saquon Barkley during practice Monday. It turned out to be only a minor scare.

The No. 2 overall draft pick caught a swing pass out of the backfield from fellow rookie Kyle Lauletta and was injured either stretching to make the catch or running down the sideline after the catch.

Barkley seemed to be favoring a leg as he walked back up the field. He eventually put his hands on his knees and then went to the turf and lay on his back while head trainer Ronnie Barnes examined him.

An ice pack was put on his left leg. However, it had been removed before he left the field after the roughly 70-minute practice, which was moved indoors because of rain.

"Saquon has a mild strain, and we'll be smart with him as we move along here," coach Pat Shurmur said later in the afternoon.

Barkley had the perfect start to his Giants' career in the 20-10 preseason loss to the Cleveland Browns on Thursday night. He took a handoff from Eli Manning on the first play from scrimmage and scampered 39 yards. The former Penn State running back finished with five carries for 43 yards.

The Giants will practice for three days against the Detroit Lions in Allen Park, Michigan, starting on Tuesday.

Given Barkley's injury, it's uncertain how much work he will get or whether he will play in the preseason game on Friday night.

"We want our guys to be smart, we want our guys to compete, be smart, we want to stay off the ground, we want to eliminate all that chatter and just keep it encouraging," Shurmur said. "That's part of being a pro is being able to practice not only with your team, but with other teams. I understand competitive spirit. Those are two teams and that's their experience. We're going to try to guard against it."

One thing neither Shurmur nor Lions coach Matt Patricia will want is a melee like the one the Jets and Redskins had this past weekend.

NOTES: Receiver Sterling Shepard's wife gave birth to their first child on Friday, a girl, Cali Clay Shepard. "I wasn't going to go to Detroit for the first few days," Shepard said. "But she came out a little bit early for us."