No. 20 Michigan rebounds with rout of Rutgers 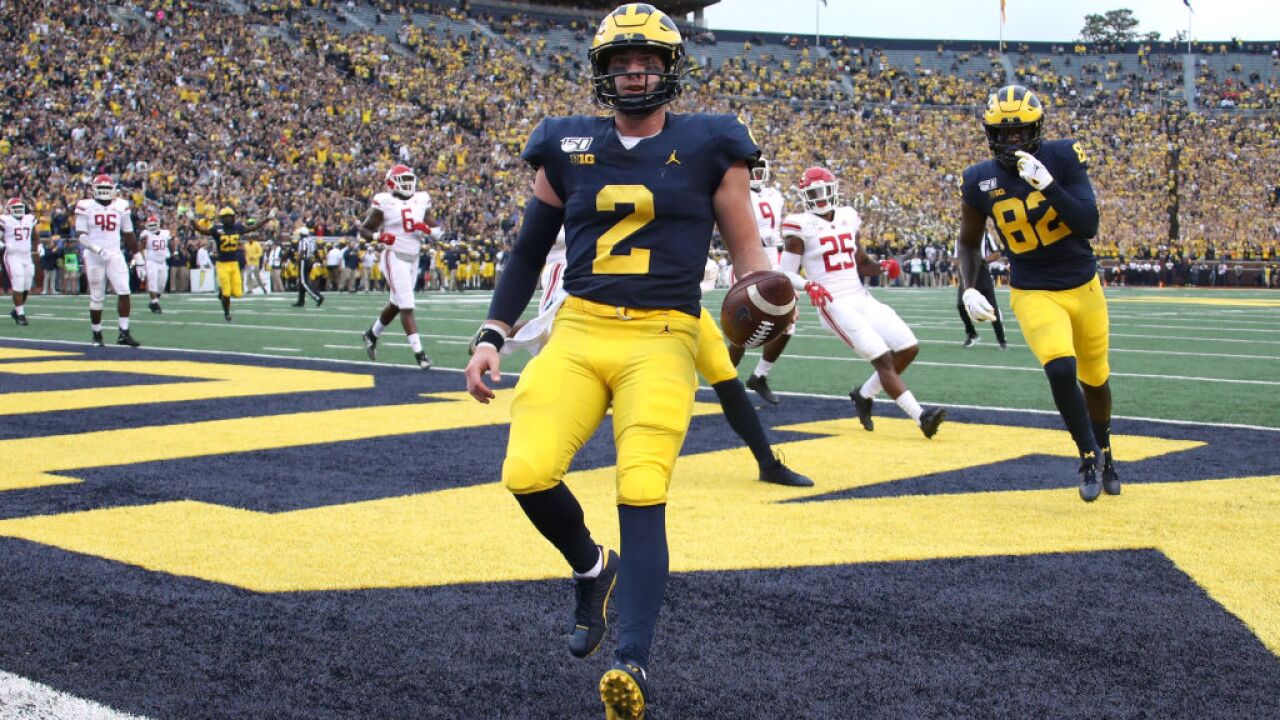 Shea Patterson accounted for three touchdowns in the first half and ran for a fourth score in the third quarter, setting up the 20th-ranked Wolverines to rout Rutgers 52-0 on Saturday.

Michigan (3-1, 1-1 Big Ten) was very motivated to put together a strong performance, no matter who it was facing, following a humiliating loss at Wisconsin.

"We came out with a chip on our shoulder," Patterson said.

The Scarlet Knights (1-3, 0-2) have not won a conference game since the 2017 season and have to improve a lot to end the drought this year.

"I completely feel just sick and awful for our guys because they continue to show up every single day and grind at work," coach Chris Ash said.

Patterson threw a quick out to Nico Collins on the opening drive and the receiver broke a tackle and sprinted up the sideline for a 48-yard score. On the Wolverines' next drive, Patterson had his first of three rushing TDs to match the number of scores the dual-threat quarterback had previously on the ground in his career.

Patterson played two-plus quarters and was 17 of 23 for 276 yards with one TD and one interception.

"Everything was better face-to-face," coach Jim Harbaugh said. "It was a good move."

The Wolverines led 24-0 at halftime and took advantage of Rutgers getting off to a rough start in the second half.

Tre Avery fumbled on the kickoff return to open the second half. Raheem Blackshear was stopped for a loss on a reception on a fourth-and-1 later in the third quarter. And, the Scarlet Knights were called for a false start twice before punting late in the third.

Michigan showed some mercy by taking Patterson out of the game late in the third and gave Joe Milton some much-needed experience with Dylan McCaffrey out with a concussion.

Milton converted a fourth down with a 1-yard TD run for the sophomore's first score to put the Wolverines up 45-0 early in the fourth. The strong-armed quarterback connected with Giles Jackson on a 23-yard pass in the end zone.

The defense held on for the school's first shutout since a 78-0 victory at Rutgers in 2016.

In all, Harbaugh hopes players who helped out in all three phases feel better about themselves and the team than they did a week ago.

"It should be encouragement to them," Harbaugh said. "When you're down and backs are against the wall, you have to come out and fight."

Michigan had 141 yards rushing, averaging just 3.4 yards per carry with only one sack affecting the total.

"We did a good job in the run game," Ash said. "But in the pass game, we couldn't get close to the football."

Rutgers: Ash fell to 8-32 in his fourth season. He faces a tough task, improving the team enough to compete enough to potentially win Big Ten games.

"We need to be able to play better than what we have," Ash acknowledged.

Ash has not led the Scarlet Knights to a Big Ten victory since beating Maryland on Nov. 4, 2017.

"We gotta win football games around here," quarterback Artur Sitkowski said after he was 17 of 24 for 106 yards. "Progress is only progress. Potential is only potential."

Michigan: The offense needed a day like that, moving the ball efficiently on the ground and through the air while limiting turnovers to one interception on a pass Patterson underthrew intended for Collins.

"We had that bad taste in our mouth so we had to get it out, show what we can do," running back Christian Turner said.

Michigan may move back up in the poll a little after plummeting following a 35-14 loss to the Badgers.