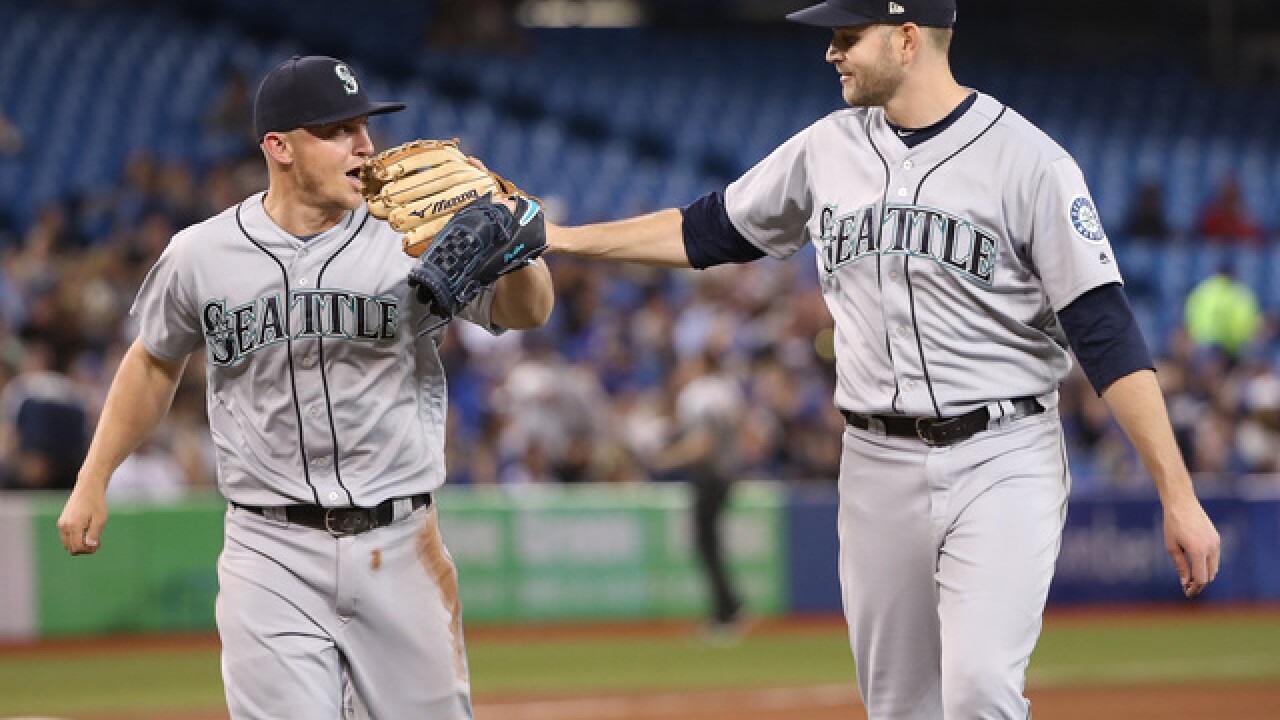 Copyright Getty Images
Tom Szczerbowski
<p>TORONTO, ON - MAY 8: James Paxton #65 of the Seattle Mariners congratulates Kyle Seager #15 after making a solid defensive play to preserve his no-hitter in the seventh inning during MLB game action against the Toronto Blue Jays at Rogers Centre on May 8, 2018 in Toronto, Canada. (Photo by Tom Szczerbowski/Getty Images)</p>

TORONTO (AP) -- James Paxton of the Seattle Mariners became the first Canadian to pitch a no-hitter in his home country, shutting down the Toronto Blue Jays 5-0 Tuesday night.

Paxton joined Dick Fowler of the 1945 Philadelphia Athletics as the only Canadians to throw a no-hitter.

Paxton, who's from British Columbia, pointed to a tattoo on his right forearm of a maple leaf -- a national symbol -- as he celebrated to a standing ovation at Rogers Centre.

"Of all places, to do it in Toronto, it's pretty amazing," he said.

"The fans were great. They were giving me some trouble in the seventh inning, but once I got past that, they started kind of cheering me on. It was cool," he said.

The 29-year-old lefty threw 99 pitches in tossing the third no-hitter in the majors this year -- all three have come in different countries.

Coming off a career-high 16 strikeouts in his last start, Paxton (2-1) was electric once again, hitting 100 mph with his fastball while retiring Josh Donaldson on a grounder to end it.

Paxton struck out seven, walked three and benefited from an outstanding play by third baseman Kyle Seager. With two outs in the seventh, Seager made a full-length diving stop on speedy Kevin Pillar's grounder down the line, then slung an off-balance throw that first baseman Ryon Healy snagged on one hop.

Russell Martin led off the Toronto eighth with a long drive that left fielder Ben Gamel caught near the wall.

"What a defense tonight. That was amazing. Those guys were making every play," he said.

Anthony Alford fouled out on the first pitch to begin the ninth and Teoscar Hernandez struck out swinging. Donaldson ended it with a hard one-hopper to Seager.

Healy pumped his fist after catching Seager's throw, and the Mariners streamed out of the dugout, dousing their pitcher with a cooler as the crowd of 20,513 cheered.

After his teammates had left the field, Paxton came back out and waved to the fans as they clapped in appreciation of his feat.

Paxton's season has taken off since a bald eagle mistakenly landed on his shoulder before a start last month. He's 2-0 with a 2.51 ERA over seven starts since the bird stuck its talons into his back before the Minnesota Twins' home opener.

This was the sixth no-hitter for the Mariners franchise, and the first since Hisashi Iwakuma did it against Baltimore in 2015. Felix Hernandez threw a perfect game in 2012, and Randy Johnson tossed Seattle's first no-hitter in 1990.

It was the first no-hitter against the Blue Jays since Detroit's Justin Verlander did it in Toronto on May 7, 2011. Toronto has been no-hit five times.

Mike Zunino hit a two-run homer as the Mariners improved to 12-6 on the road.

Marcus Stroman (0-5) remained winless in seven starts. The right-hander allowed five runs and nine hits in five innings, and has a 7.71 ERA.

TRAINER'S ROOM
Blue Jays: Toronto put SS Aledmys Diaz (left ankle) on the 10-day DL, retroactive to May 7, and recalled INF Richard Urena from Triple-A Buffalo. Diaz sprained his ankle when he landed awkwardly on first base in Sunday's win at Tampa Bay. ... OF Curtis Granderson was available after missing the previous two games because of a sore right hamstring. ... INF Gift Ngoepe cleared waivers and was assigned to Triple-A.

UP NEXT
Mariners: LHP Wade LeBlanc (0-0, 3.57) is scheduled to make his second start of the season following five relief appearances. LeBlanc pitched four scoreless innings against Oakland on May 3.
Blue Jays: LHP Jaime Garcia (2-2, 6.00) allowed a season-worst six earned runs in his previous start, May 3 at Cleveland, and is 0-2 with a 9.88 ERA in his past three outings.