Pistons beat the buzzer, Raptors in Casey's return to Toronto 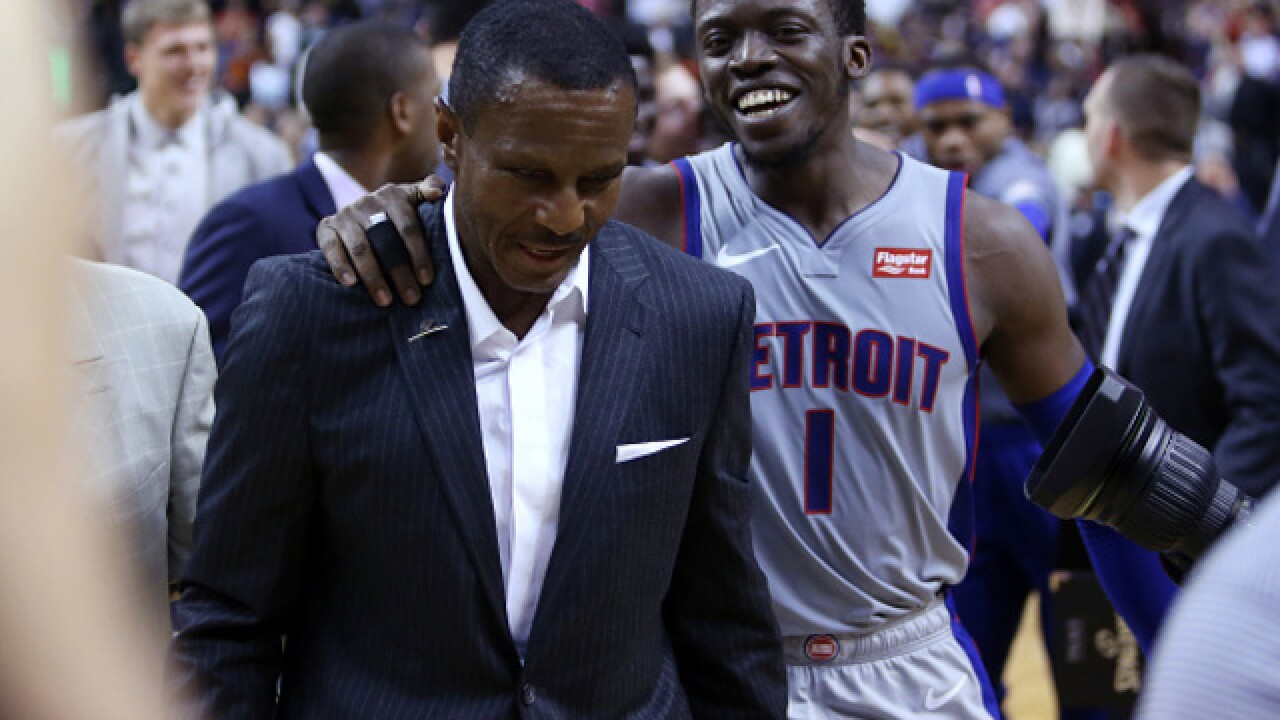 Copyright Getty Images
Vaughn Ridley
<p>TORONTO, ON - NOVEMBER 14: Head Coach Dwane Casey of the Detroit Pistons celebrates with Reggie Jackson #1 after defeating the Toronto Raptors in an NBA game at Scotiabank Arena on November 14, 2018 in Toronto, Canada. NOTE TO USER: User expressly acknowledges and agrees that, by downloading and or using this photograph, User is consenting to the terms and conditions of the Getty Images License Agreement. (Photo by Vaughn Ridley/Getty Images)</p>

TORONTO (AP) - Reggie Bullock made the winning shot as time expired and the Detroit Pistons rallied from a 19-point deficit to beat the Toronto Raptors 106-104 on Wednesday night, giving coach Dwane Casey a victory over his former team.

Blake Griffin had 30 points and 12 rebounds, Reggie Jackson and Langston Galloway each scored 13 and Stanley Johnson had 12 points for the Pistons, who had lost six of eight.

Kawhi Leonard scored 26 points and Pascal Siakam and Greg Monroe each had 17 for the Raptors, who have lost consecutive home games after a 7-0 start. Toronto (12-3) also failed to match the best start in franchise history. The Raptors went 13-2 to begin the 2014-15 season.

GAME. WINNER. The Pistons beat the buzzer in Toronto.

Reggie Bullock hits off of an incredible in-bound play drawn up by Dwane Casey. pic.twitter.com/9epO1Y1nRC

Toronto had won six straight over the Pistons, and nine of the previous 11 meetings.

Detroit trailed 88-77 to begin the fourth but took its first lead since the opening quarter, 98-97, on a jump shot by Jackson with 4:54 remaining.

Leonard tied it at 104 by making a jumper with 38 seconds to go. Griffin missed a jumper at the other end and Kyle Lowry grabbed the rebound, giving Toronto 10 seconds to try a go-ahead shot. Leonard brought the ball up but lost it out of bounds with 2 seconds to go.

After Siakam blocked Glenn Robinson's shot out of bounds, Detroit took the ball under the basket with 1.2 seconds left. Jose Calderon inbounded to Bullock, who hit the buzzer-beating shot.

Monroe played a season-high 21 minutes because starting center Serge Ibaka sat out with a sore right knee. Ibaka has scored 10 or more points in 13 consecutive games. Jonas Valanciunas started in his place.

The Raptors lost another starter when guard Danny Green left with a sore lower back in the third quarter. He did not return.

Fans stood and cheered when Casey was introduced before the game, and roared in approval when a video tribute was shown during the first timeout. Players from both benches also stood and applauded as Casey acknowledged the crowd with a wave.

Casey won 320 games in seven seasons with the Raptors, more than any other coach in franchise history. He was selected NBA Coach of the Year after Toronto set a team record with 59 wins last season, but had been fired by the time he received the award. Casey was let go after the Raptors were swept in the second round of the playoffs by Cleveland, their third straight postseason defeat at the hands of the Cavaliers.

Pistons: Calderon spent parts of eight seasons with the Raptors and is the franchise leader in assists (3,770). ... Casey went 320-238 with the Raptors, leading them to five straight playoff berths and their only appearance in the Eastern Conference finals, a six-game loss to the Cavs in 2016.

Raptors: F C.J. Miles, who left Monday's loss to New Orleans because of a strained right adductor, was inactive. There is no timetable for his return. ... For the second straight game, the Raptors missed nine of their first 10 attempts from 3-point range. They finished 4 for 20.

Raptors: At Boston on Friday night.