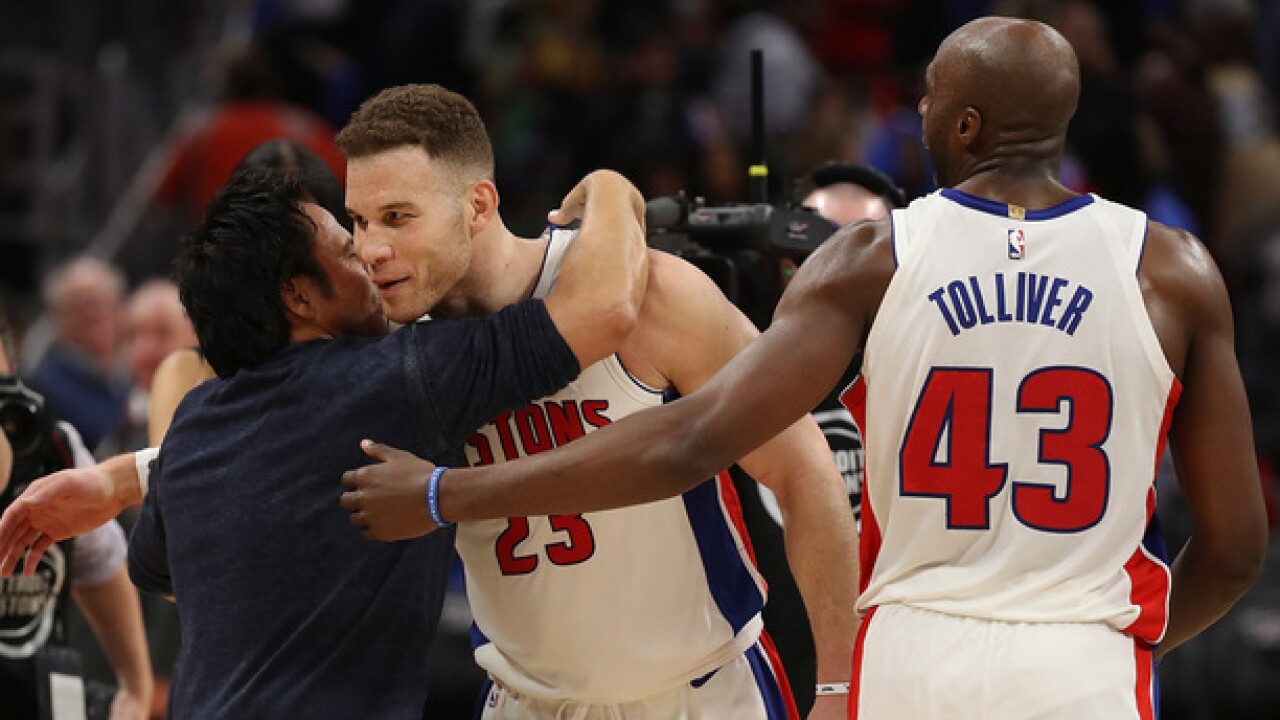 CHICAGO (AP) — The Pistons won't be picking in the first round this season, as their draft pick was officially traded to the Clippers on Tuesday night.

Detroit landed the No. 12 overall pick in the NBA Draft Lottery. The Blake Griffin trade involved a top-four protected pick from the Pistons.

Phoenix has won the No. 1 pick in next month’s NBA Draft.

It’s the first time the Suns will have the chance to make the first overall selection. The Suns had the right combination of pingpong balls pop up for them at the Draft Lottery on Tuesday night, a reward of sorts after a season where Phoenix had the NBA’s worst record at 21-61.

Phoenix lost a coin flip for the top pick in 1969 to Milwaukee. The Bucks took Kareem Abdul-Jabbar. The Suns took Neal Walk.

Sacramento will pick No. 2 and Atlanta got the No. 3 pick — both of them moving up to get there. The top three spots were determined by the lottery, and then spots 4-14 fell in line of reverse order of record.

The draft is June 21 at Barclays Center in Brooklyn.

Josh Jackson, who just completed his rookie season with Phoenix, represented the Suns on the stage, for the public announcement of what was drawn in secret about an hour earlier. Only a handful of team representatives, NBA officials and media knew the outcome of the lottery before it was revealed publicly and they were all sequestered until the results were aired.

“Extremely excited,” Jackson said after the Suns were announced as the winner.

It’s part of a big week already for the Suns, who introduced Igor Kokoskov as their new coach Monday and now will have the chance to pick No. 1.

Arizona freshman Deandre Ayton is widely expected to be a strong candidate to go No. 1, and since he was at the lottery he now has a sense for how his immediate future might play out. Duke’s Marvin Bagley III was also in attendance, as was Oklahoma’s dynamic Trae Young and several of the other likely top picks.

Most will be participating in the draft combine, also happening in Chicago this week. Ayton declined an invitation to be involved with those workouts.

Ayton will have obvious local appeal to the Suns, as would Bagley — an Arizona native.

“It would mean a lot if it were to happen that way,” Bagley said.

The lottery has been around since 1985, was tweaked to a weighted system in 1990 and will be changing again next year in an effort to discourage teams from tanking.

Going forward, the three teams with the worst regular-season records will all have 14 percent chances of winning the No. 1 pick, the fourth-worst team will have a 12.5 percent chance and the fifth-worst 10.5 percent. So there will still be a benefit to being bad, but the odds will be so similar among the bottom five teams — a 3.5 percent differential in the race for No. 1, instead of the 16.2 percent gap like this year — that the reward for losing might be lessened.