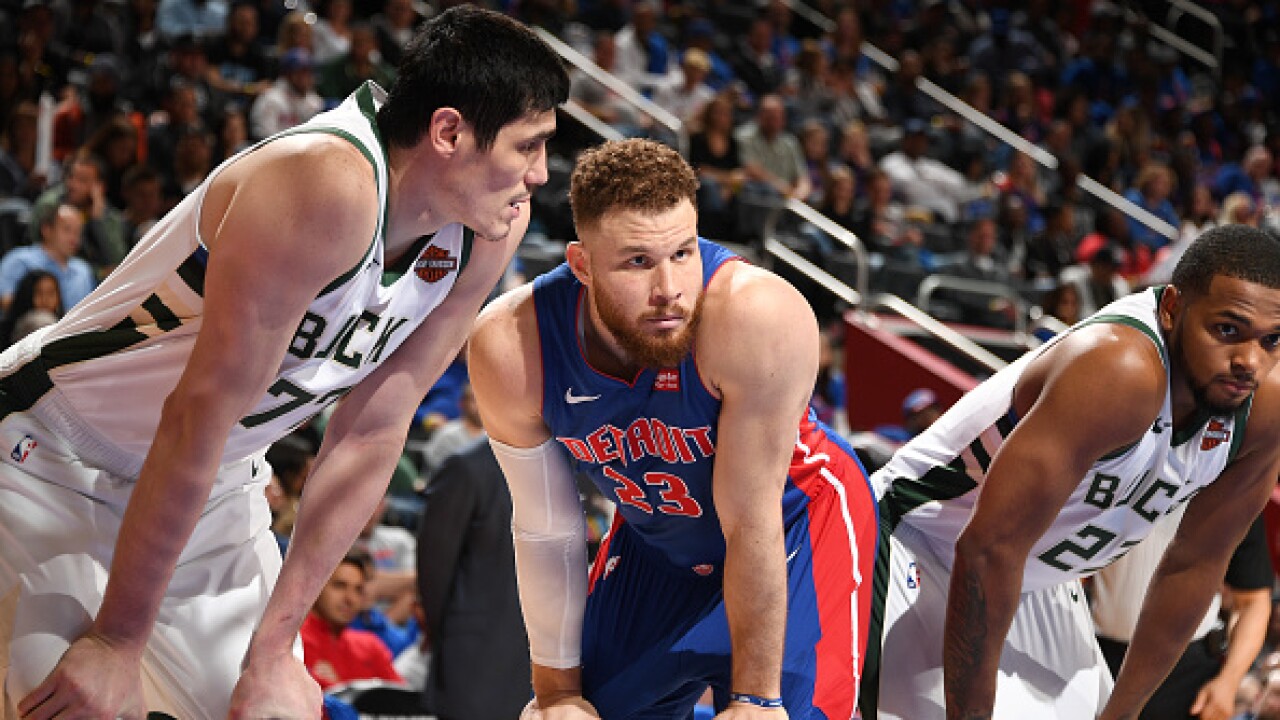 Chris Schwegler/NBAE/Getty Images
DETROIT, MI - APRIL 20: Blake Griffin #23 of the Detroit Pistons looks on against the Milwaukee Bucks during Game Three of Round One of the 2019 NBA Playoffs on April 20, 2019 at Little Caesars Arena in Detroit, Michigan. NOTE TO USER: User expressly acknowledges and agrees that, by downloading and/or using this photograph, user is consenting to the terms and conditions of the Getty Images License Agreement. Mandatory Copyright Notice: Copyright 2019 NBAE (Photo by Chris Schwegler/NBAE via Getty Images)

(AP) — The Milwaukee Bucks can wipe away 18 years of frustration on Monday night.

They haven't won a playoff series since the 2000-01 season, when they reached the Eastern Conference finals. That drought can end in Detroit if they complete a sweep of the Pistons.

The top-seeded Milwaukee cruised through the first three games, winning by an average of 24 points. If they lose in Game 4, the Bucks would have three more chances in the best-of-seven series to end their streak of eight straight first-round exits. The earlier the Bucks eliminate eighth-seeded Detroit, the more time they'll have to prepare for the conference semifinals.

"It's going to be nice if we can finish it here and get six days of rest," superstar forward Giannis Antetokounmpo said.

In Game 3 on Saturday, Antetokounmpo had a quiet night and the Bucks still led by double digits most of the way. Antetokounmpo finished with 14 points, three assists and four turnovers and only played 27 minutes due to foul trouble. The Pistons couldn't take advantage of his off night, though, as Milwaukee had six other players in double figures in its 119-103 victory.

"It's good to see my team doing really well out there without me," he said. "It means a lot to me. There's going to be nights like this. My teammates did a great job of picking me up."

The Bucks were up 13 points when Antetokounmpo sat early in the third quarter after getting whistled for his fourth foul. When he re-entered late in the quarter, they were leading by 22 points.

"It's something we've been trying to build all year," coach Mike Budenholzer said. "We're a team that plays together, tries to take what the defense gives us. Guys have a lot of confidence to make plays. It's not just all about Giannis, as amazing and great as he is. If and when we need more from other people, it's a credit to Giannis to let his teammates carry him some nights, carry him some stretches."

The Bucks will try match their regular-season feat against the Pistons. Their four-game sweep was the first by either team in the all-time series. They have met in the postseason four other times, with Detroit winning each time.

"We might be the number one seed and best team in the NBA (record-wise) but at the end of the day, we haven't won a playoff series in a while," Antetokounmpo said. "We're hungry, everybody's hungry."

The Pistons' best player, power forward Blake Griffin, made his debut in the series after sitting out the first two games with a sore left knee. Griffin toughed it out for 31 minutes and posted 27 points, seven rebounds and six assists. His teammates let him down, as Detroit shot below 40 percent for the third straight game.

"That young man is giving us everything he has," coach Dwane Casey said. "He said he was feeling good. I was concerned about his conditioning with as much time as he's missed. You can't really simulate 5-on-5 basketball when you're rehabbing. But he came in and gave us what he could. He just has a presence that we can't replicate."

The Pistons haven't shown enough of a defensive presence against a team that averaged a league-high 118.1 points.

"We had some situations where we make a mistake or miss a shot, now we go down to the defensive end and don't carry out our assignments," Casey said. "That's part of growth. That's a team that makes you pay for mistakes that you make."