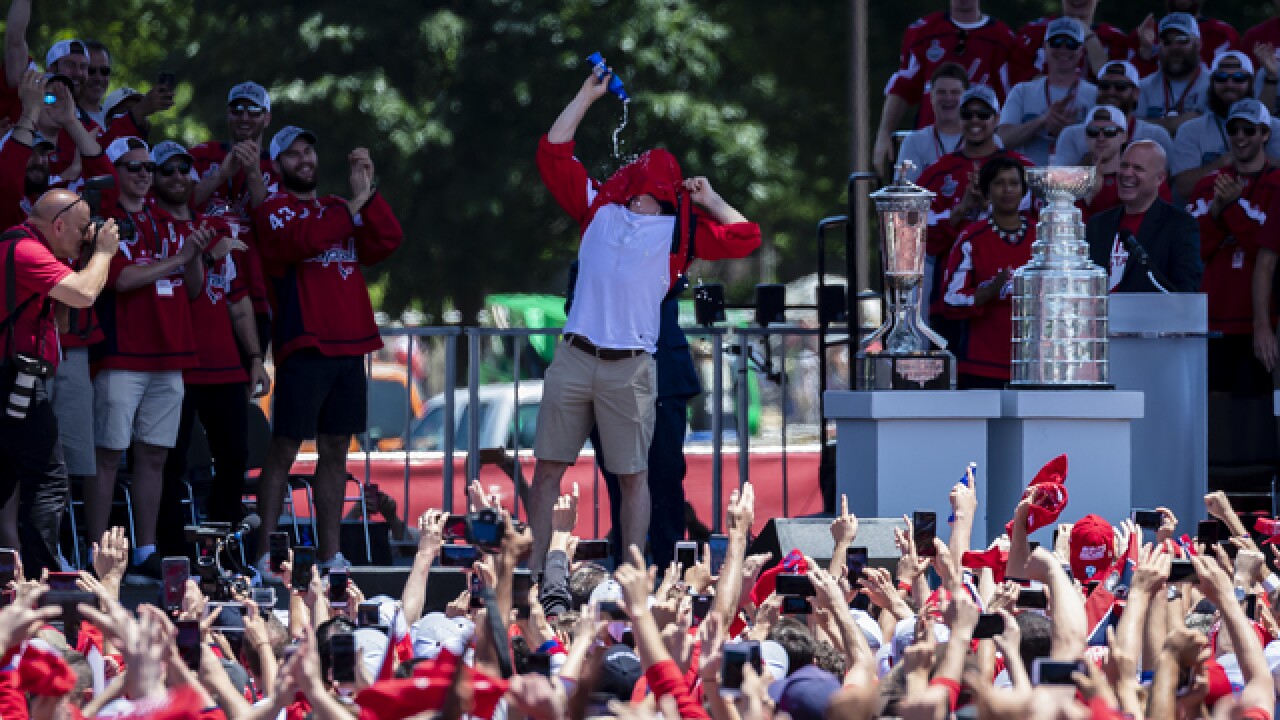 WASHINGTON (AP) — Nine early playoff exits paved the way for the Capitals' unexpected Stanley Cup run and made the trip down Constitution Avenue all the more satisfying to the NHL champions and their fans.

Alex Ovechkin and Nicklas Backstrom rode the final bus down the mile-long parade route, lifting the Cup to roaring cheers and waving to seas of red in the crowd.

Five days after capturing the franchise's first title and the first of any kind by a Washington team in the major four professional sports since 1992, this was their day to soak in winning following so much disappointment.

"Because we waited so long, I think it feels even better," Backstrom said.

Hundreds of thousands of fans lined Constitution and filled the National Mall on Tuesday to celebrate a long journey fulfilled. One fan held up a sign reading, "Worth the Wait," but before the end of the rally, T.J. Oshie already had the crowd thinking about next season.

The serious work of getting geared up for the 2018-19 season begins in the coming days and weeks with decisions on coach Barry Trotz, defenseman John Carlson and other free agents. But for players such as Ovechkin and Backstrom who have been through eliminations at the hands of the Penguins, Rangers, Lightning, Canadiens and Flyers dating to 2008, the partying leading up to the parade isn't close to ending.

Much like the Capitals did over the weekend by taking the Cup to local bars and restaurants, the parade was a chance to celebrate with a fan base that had to endure 42 seasons without a Cup.

Alex Ovechkin held a karaoke party with one million of his closest friends at the Capitals parade.

His Best Week Ever continues. pic.twitter.com/6sMNtZcAVX

Fans congregated on the National Mall hours before the parade began, filled the steps of the National Archives and lined up 20 deep in some areas to catch a glimpse of players riding more than three dozen buses from 23rd Street to 7th.

"Look at this — look at the people that's here" Ovechkin said. "We thought it was going to be crazy, but it's basically nuts. You guys are killing it."

Ovechkin, Backstrom, veteran Brooks Orpik, owner Ted Leonsis and team president Dick Patrick took up the most prominent place in the parade on the last bus with the Stanley Cup. Chants of "Ovi! Ovi!" alternated with pleas of "Raise the Cup!" which Ovechkin, Backstrom and Orpik did off and on while sipping from beer bottles.

Trotz threw beads from his double-decker bus, but the pending free agent coach saved potentially his most meaningful impact of the day for his speech at the rally.

People went nuts for Alex Ovechkin at the Capitals parade.

He walks up to the mic, quiets the crowd. "What's up babes?" pic.twitter.com/hrvUmum46I

"I know our years of adversity has sort of came to an end," Trotz said. "We did this together and it feels so special. Love this, love the community. We're going to do it again."

There's no certainty about Trotz unless he signs a new contract, but the Capitals should have much of their core intact as they try to complete the difficult task of repeating. Before rival Pittsburgh went back-to-back in 2016 and 2017, no team had done it since Detroit in 1997 and 1998.

Of course, that didn't stop players from bringing it up to the delight of the crowd that stretched down the Mall almost to the Washington Monument.

"I couldn't see the end of people from the stage," winger Tom Wilson said. "It's unbelievable to give back the least we could and just celebrate with them."

Beyond the scripted — two high school marching bands, an F-16 flyover, Budweiser Clydesdales and past greats such as Olie Kolzig and Peter Bondra — backup goaltender Philipp Grubauer sprinted around with the D.C. flag, Oshie chugged a beer through his jersey and Ovechkin and fellow Russian Evgeny Kuznetsov dropped F-bombs on stage.

Trotz invoked Martin Luther King Jr. by saying, "We had a dream, and we did it." Leonsis quoted John F. Kennedy's "Ask Not" speech. Wilson brought it back to the title by shouting, "Everybody says what happens in Vegas stays in Vegas, but we brought the Cup home!"

By the end of the sun-soaked rally, Capitals players swayed together and sang Queen's "We Are the Champions," a song they've been belting out renditions of with varying sobriety over the past few days.

"It's been a long time since we had a championship here in this city," Backstrom said. "To be able to after all these years to bring it, it's great. It's a sports city. There's not another city that deserves a championship more than D.C."

Alex Ovechkin doesn't need a float for the Capitals parade. He's been floating on Cloud Nine since he won the Cup. pic.twitter.com/bVJ7K3bqYW