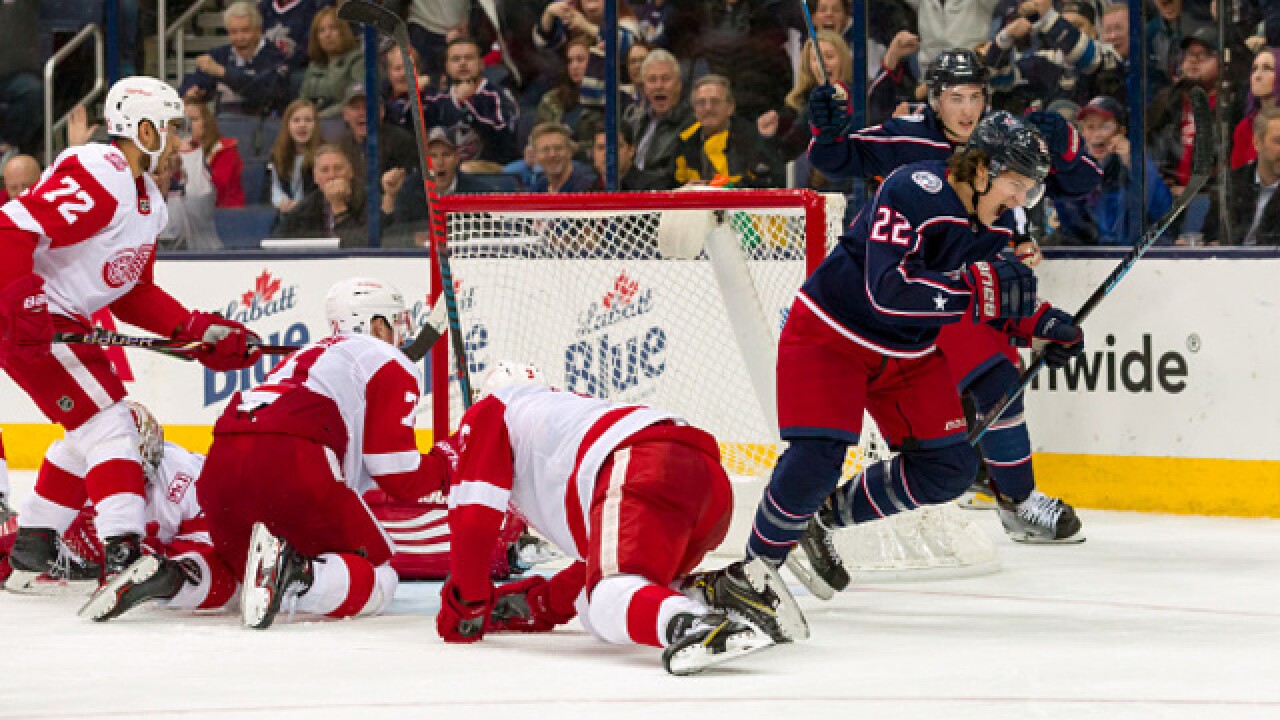 Copyright 2018 Scripps Media, Inc. All rights reserved. This material may not be published, broadcast, rewritten, or redistributed.
Icon Sportswire
<p>COLUMBUS, OH - APRIL 03: Columbus Blue Jackets left wing Sonny Milano (22) celebrates after scoring a goal in the third period of a game between the Columbus Blue Jackets and the Detroit Red Wings on April 03, 2018 at Nationwide Arena in Columbus, OH.(Photo by Adam Lacy/Icon Sportswire via Getty Images)</p>

Pierre Luc-Dubois scored in overtime to lift the Columbus Blue Jackets over the Detroit Red Wings 5-4 on Tuesday night and keep their playoff plans on track.

Artemi Panarin tied it for Columbus when he put back his own rebound late in the third period. That set the stage for Dubois' shot from the slot 2:55 into the extra period.

The Blue Jackets are trying to get to the playoffs in consecutive years for the first time in franchise history, and for most of the game it looked as if Detroit would put a crimp in their plans. Columbus had to rally from a 4-1 second-period deficit to get the two points and stay in third place in the Metropolitan Division with two games left.

Columbus is one point or a loss by Florida shy of clinching a playoff spot. The Panthers beat Nashville 2-1 on Tuesday night to prevent Columbus from clinching.

Cam Atkinson scored twice and Sonny Milano also had a goal for the Blue Jackets, who have won 13 of 15. Sergei Bobrovsky had 23 saves.

Jimmy Howard had 36 saves and Tyler Bertuzzi had two goals for the Red Wings, who ended a three-game winning streak. Gustav Nyquist had a goal and an assist, Darren Helm also scored and Henrik Zetterberg had three assists for Detroit.

Bertuzzi put the Red Wings up four minutes into the game when he redirected Zetterberg's shot from the left corner. Atkinson tied it on a power play a few minutes later when he waited next to the net and stuffed in a pass from Seth Jones.

Detroit went up 2-1 later in the period when Bobrovsky and defenseman Jones got tangled up in front of the goal and a bouncing shot from Helm went into the net off Jones. Bertuzzi got his second of the evening late in the period on a power play, beating Bobrovsky on a rush.

Nyquist gave Detroit a three-goal edge on a power play just 31 seconds into the second period. Atkinson pulled it to 4-2 later in the period on a power play when he scored from the right circle as Alexander Wennberg screened out Howard. Detroit wanted goalie interference but didn't the call.

Milano poked in a loose puck from the doorstep to make it 4-3 midway through the third period, and then Panarin tied it.

NOTES: Panarin has the franchise points record with 80. ... Columbus D Zach Werenski left the ice in the second period after taking a puck to the back of the head blocking a shot from Andreas Athanasiou.

Columbus F Alex Broadhurst made his NHL debut. He went to the penalty box in the first period for high-sticking, which led to a Detroit's third goal. ... Detroit C Dylan Larkin has six points in the past three games.