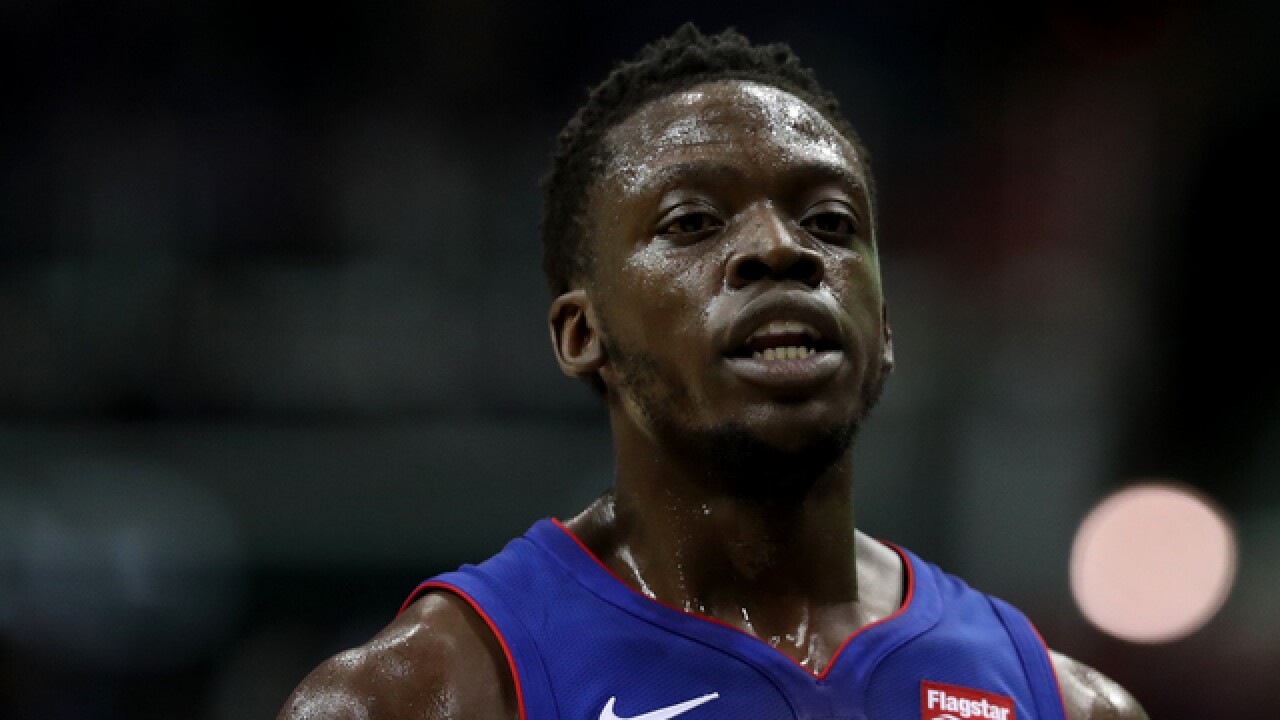 Copyright Getty Images
Rob Carr
<p>WASHINGTON, DC - DECEMBER 1: Reggie Jackson #1 of the Detroit Pistons smiles while walking off the court against the Washington Wizards at Capital One Arena on December 1, 2017 in Washington, DC. NOTE TO USER: User expressly acknowledges and agrees that, by downloading and or using this photograph, User is consenting to the terms and conditions of the Getty Images License Agreement. (Photo by Rob Carr/Getty Images)</p>

DETROIT (AP) — The Detroit Pistons have a new coach — and the usual amount of optimism that accompanies such a big change.

What they really could use this season is a healthy point guard.

On Thursday, Reggie Jackson returned to five-on-five workouts at the team's training camp in Ann Arbor.

The Pistons are hopeful Jackson will be ready to play by the start of the season, as he’s still working his way back into shape following an ankle injury. Jackson went down in late December, derailing what had been a promising start for Detroit in 2017-18. Ed Stefanski, a new senior executive for the Pistons, sounds optimistic about Jackson’s health, but the point guard’s recovery isn’t complete yet.

“Reggie is fully healed. We did an MRI I think a couple weeks ago, and it’s perfect,” Stefanski said at media day Monday. “It’s just now basketball shape, and he hasn’t played all summer long.”

Detroit got off to a 19-14 start last season, but after Jackson’s injury the team floundered, and Stan Van Gundy’s tenure eventually came to an end. The Pistons now have a new coach in Dwane Casey and a new front office.

Their roster, however, looks a lot like it did at the end of last season. About a month after Jackson’s injury, Detroit acquired Blake Griffin in a trade, adding a star to the roster but also limiting the team’s flexibility.

Jackson eventually returned, but the Pistons weren’t able to salvage the season. If he’s healthy throughout 2018-19, that could go a long way toward helping Detroit improve.

“I’m excited to be getting on the court,” Jackson said. “I didn’t touch a court much in the summer, so I’m excited to just go ahead and love on Spalding some — get out there with my teammates and try to get back to playing basketball.”

“He’s had a tough go at it since he’s been here, with injuries. It’s been hard for him,” Drummond said. “I’ve done a great job of just staying on him, letting him know that we do need him. ‘Don’t get down on yourself. Your time is coming.’”

In addition to Jackson’s injury, Luke Kennard had an offseason knee issue, and Jon Leuer had surgery after injuring his right knee during an offseason workout. Stefanski said Kennard and Leuer are progressing fine but are also not in basketball shape.

“My goal is to be back before the first game,” Leuer said. “Hopefully the last preseason game. That’s still kind of fluid right now.”

NOTES: Drummond discussed a potential addition to his game — the 3-point shot. Drummond has made five 3-pointers in his NBA career and was 0 for 11 from beyond the arc last season. “The 3-point shot’s something I’ve added six years ago. Just never had a coach that allowed me to shoot it,” he said. “I guess now is my time to really showcase it.”