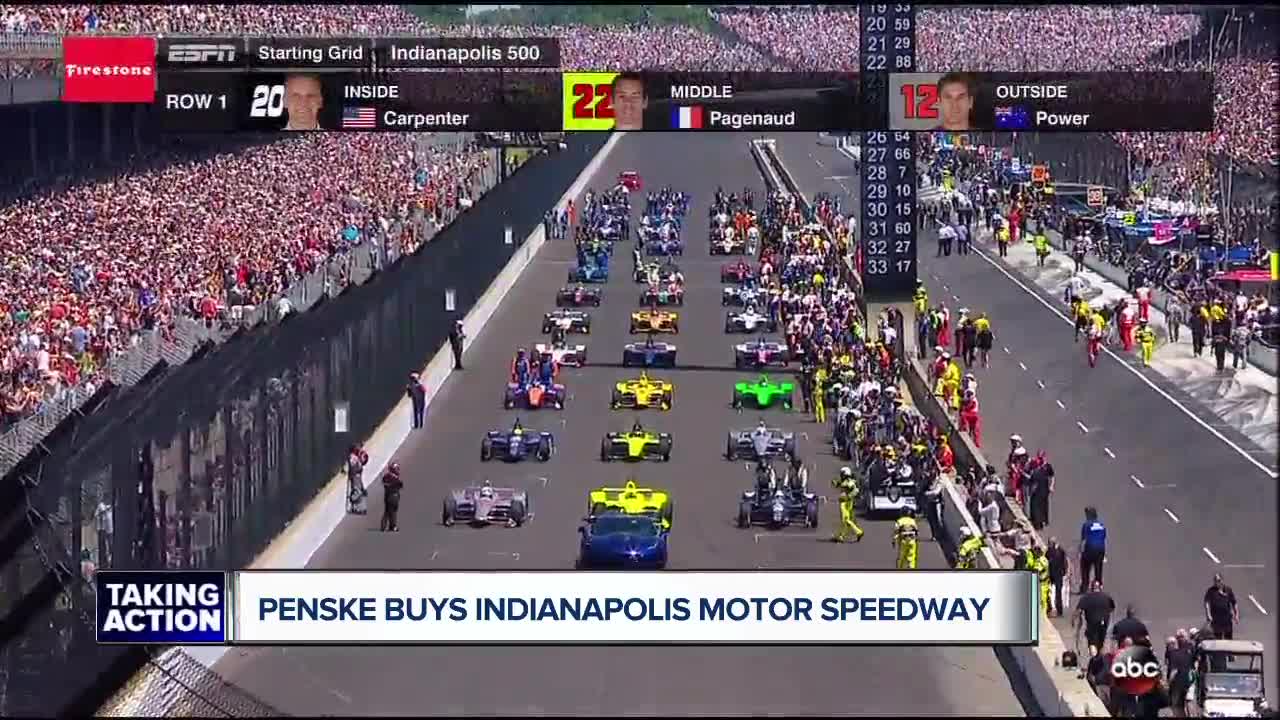 Roger Penske is expected to be named the new owner of the NTT IndyCar Series, the Indianapolis Motor Speedway and IMS Productions.

(AP) — Roger Penske and the Penske Corporation have completed the acquisition of Indianapolis Motor Speedway and the IndyCar Series. In November, it was announced that Penske would buy the speedway in a stunning move that relinquishes control from the Hulman family after 74 years.

Tony Hulman bought the dilapidated speedway in 1945 and brought racing back to the corner of 16th St. and Georgetown Ave. after a four-year absence following World War II. Roger Penske will become just the fourth owner of the 110-year-old speedway.

"We are looking forward to carrying on the tradition of the Indianapolis Motor Speedway and IndyCar racing," Penske said in a release. "We have been diligently working with the teams at IMS, INDYCAR and IMS Productions over the last two months to ensure a smooth and productive transition and we are ready to hit the ground running. Now, it is time to get to work as we continue the growth of the Speedway and we build on the momentum of the NTT IndyCar Series."

The speedway spun off multiple subsidiaries, including the IndyCar Series and Indianapolis Motor Speedway Productions, which are also part of the deal to Penske Entertainment. That group is a subsidiary of Penske Corp., which is owned by billionaire Roger Penske.

"Great day for our family and our team," Penske said in a text message to The Associated Press.

The IndyCar Series is on an upward trend with improved television ratings and increased interest. Penske is the winningest team owner in Indianapolis 500 history with 18 victories, including Simon Pagenaud's win in May. He capped the IndyCar Season with a championship from driver Josef Newgarden, the 15th for the Team Penske organization.

"We have found the ideal steward of the company and its iconic assets," the document states. "Penske Corporation — with its 64,000-plus employees and more than $32 billion in consolidated revenue — will bring tremendous energy, leadership and resources to IMS, IndyCar and IMSP.

"For a number of years, the Hulman & Company management and board have engaged outside advisers and experts to consider the full range of strategic options available. Ultimately, it was decided to focus on the possible sale of the company and finding a buyer that would be the best steward of the company and its iconic assets."

The document states Penske Corp. approached the Hulman board in the fall about the purchase.

Support from rival team owners was immediate. Chip Ganassi said Penske called him early Monday morning before the sale was announced to inform him, adding "the place is going to be run like a business now."

Michael Andretti called it "positive news" for the series and the speedway.

"Roger has always strived to do great things for both IMS and Indy car racing, and I'm sure he will continue to do so in this new ownership position," Andretti said. "Both the Indy 500 and the NTT IndyCar Series have been on a rise and I look forward to the continued climb."

And Bobby Rahal called him the "perfect custodian" for the speedway.

"Roger Penske's commitment to the sport we love is over six decades long and I am confident that his stewardship of the Indianapolis Motor Speedway and the IndyCar Series will ensure a great future for the sport," Rahal said. "His many successful business ventures underline the fact that he is the perfect custodian of one of the most historic venues in the world and is the perfect architect to build the foundation for the next 100-plus years of the sport."

Penske's love of the speedway dates to 1951 when his father, Jay, scored a pair of tickets to the Indianapolis 500 from the metal fabrication company in Cleveland where he worked. He brought his 14-year-old car-loving son to the speedway to see the event live after listening to it only on radio for many years.

Penske was instantly hooked and has missed only six Indianapolis 500s since, five of which came when the IndyCar Series was formed by Tony George and split from CART. Penske teams remained in CART, and CART teams were not welcome at the 500.

CART was once the most popular form of motorsports in the U.S., but NASCAR swallowed open-wheel racing during the tumultuous times after Tony George created the Indy Racing League. The split fractured open-wheel racing in North America and it has never recovered even after CART conceded and merged into what is now known as IndyCar.

The purchase was applauded by Team Penske driver Will Power, the 2018 Indy 500 winner and former IndyCar champion, who understands all Penske drivers strive to please the boss at Indianapolis Motor Speedway.

"Roger's love of Indy and racing is no secret, so I can't think of anyone better to have purchased it," said Power. "I think this helps secure the future of the sport and continues the positive direction that the series is headed in."

George, the grandson of Tony Hulman, has long run the speedway and its properties along with his sisters and a board of directors. But matriarch Mari Hulman George, daughter of Tony Hulman, died last November and her children and the board have made a series of moves divesting their businesses. The Hulman & Company family sold its other primary business, Clabber Girl, to B&G Foods for $80 million in May. Clabber Girl produced name brand baking powder, baking soda and corn starch for 150 years.

The family has now turned its racing properties over to Penske in an announcement made one day after the one-year anniversary of Hulman George's death. Penske, who turned 82 in February, received the Presidential Medal of Freedom from President Donald Trump last month.

"I cannot think of a better owner than Roger Penske and his corporation to ensure the future and growth of IndyCar," Zak Brown, CEO of McLaren, told the AP. McLaren is entering IndyCar next season and Brown was a longtime Indianapolis businessman who ran a racing marketing business.

"His business acumen and dedication to IndyCar racing and passion for the Indianapolis Motor Speedway is second to none," he said.