Ryder Cup starts with pressure on for everyone 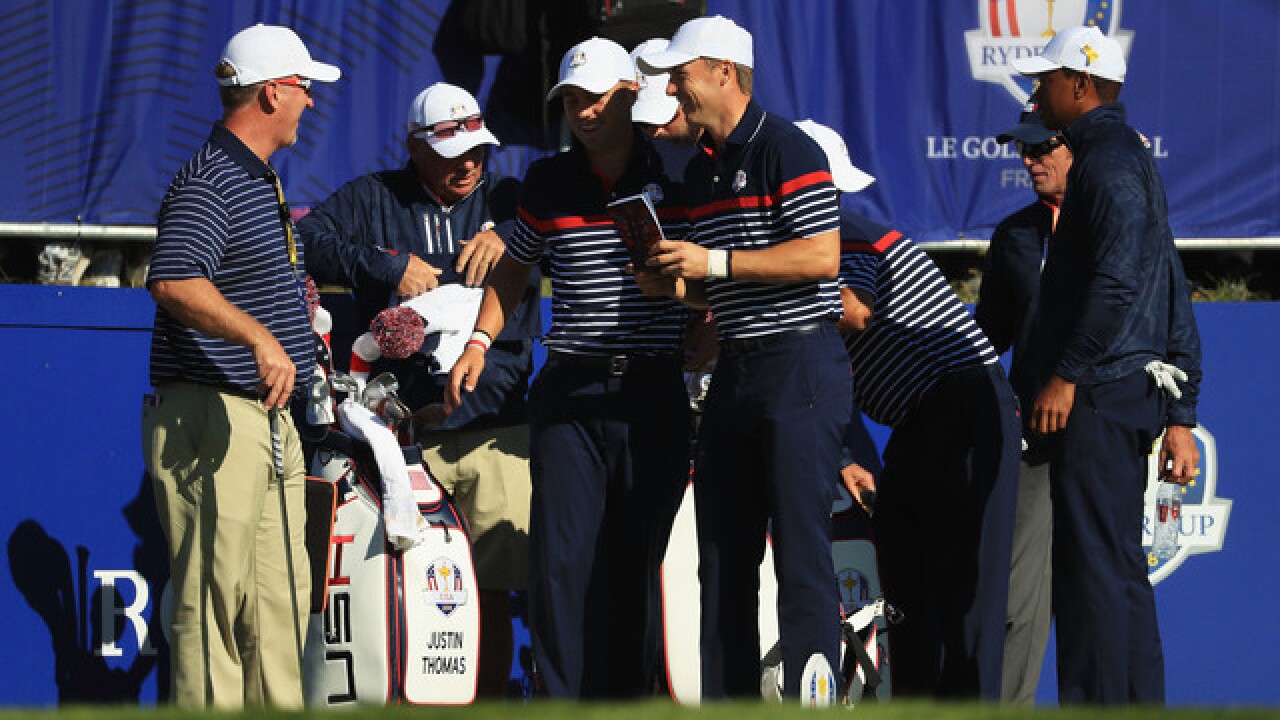 SAINT-QUENTIN-EN-YVELINES, France (AP) — Jim Furyk has spent four days watching his team play loose and confident, two key ingredients he hopes will allow the Americans to end 25 years without winning the Ryder Cup away from home.

He can only hope that’s what he sees when the shots at Le Golf National really count.

“What would make me nervous?” Furyk said on the eve of the matches. “If I showed up in the morning and guys had a look on their face that made me nervous. I don’t usually see that with this group.”

Flags were raised, anthems were played and the partisan cheers began late Thursday afternoon to signal the end of a hype and anticipation of a Ryder Cup featuring two of the strongest teams the U.S. and Europe have presented at the same time.

“I believe in this team, one through 12,” European captain Thomas Bjorn said.

Instead, Spieth gets to play with one of his best friends, Justin Thomas, a relationship that took root in France more than a decade ago when both wore American colors in the Evian Junior Masters.

“Very familiar with each other’s games — have been for, shoot, over 10 years now,” Spieth said. “So it’s going to be really exciting to be able to look at him on the first tee and kind of remember where we’ve come from, and we’re both here.”

Reed gets his hero — Tiger Woods — in the anchor match.

“We both feel like we’re playing well, and we want to go out there and represent our country the best,” said Reed, who in two Ryder Cups has been called “Captain America” because of his fist-pumping, ear-cupping, finger-shushing bravado. “The best way to do that is go out and have some fun and try to play some good golf and do it the right way. And any time you get to tee it up with Big Cat, it’s always fun.”

Missing from the American lineup is Phil Mickelson, who will sit out the opening session for the first time since his Ryder Cup debut in 1995.

Bjorn has five Ryder Cup rookies on his side, and four of them will be walking to that first tee to hit a shot before a grandstand that looks like it belongs at a football stadium, 72 feet high with a capacity of 6,928, unheard of for a golf tournament.

That starts with Rahm, the latest Spaniard who brings a big game and big emotion to an event that means so much to all of Europe. He will be with Rose, who has played effectively with Henrik Stenson the last two Ryder Cups.

Both captains delivered the same message: Their teams are so strong that they had loads of options and tough choices on whom to sit. Another session of foursomes follow Friday afternoon, and neither was willing to guarantee that everyone will have played by the end of the day.

Bjorn said he would accept a split of the morning matches considering he has four rookies playing, though he hopes for more.

“You’d like to be ahead after any session, but when I look at these matches, they could be as tight as anything, all four of them, and it’s impossible for me to predict what’s going to happen,” Bjorn said.

Pressure is unlike any other event in golf, with 28 matches held over three days, relentless action before partisan cheering. It started during the opening ceremony, where Woods received the loudest ovation, and even chants of “Tiger, Tiger” were overpowering chants of “USA.”

Not long after winning two years ago at Hazeltine, the Americans were reminded they haven’t won on European soil since The Belfry in 1993, the year three of its players — Spieth, Thomas and Bryson DeChambeau — were born.

Woods was still in high school.

That doesn’t mean Europe can play without care. Still stinging is the rude treatment, endless cheering and the champagne celebration for the Americans two years ago. Europe has lost only three times over the last 25 years.

“I look at the U.S. and guys probably have a habit of putting too much pressure on ourselves here because it’s been 25 years,” Furyk said. “Europe’s putting pressure on themselves because we brought the cup over from the United States. Playing at home is wonderful for the fans. It’s a beautiful thing. But it adds some pressure.”