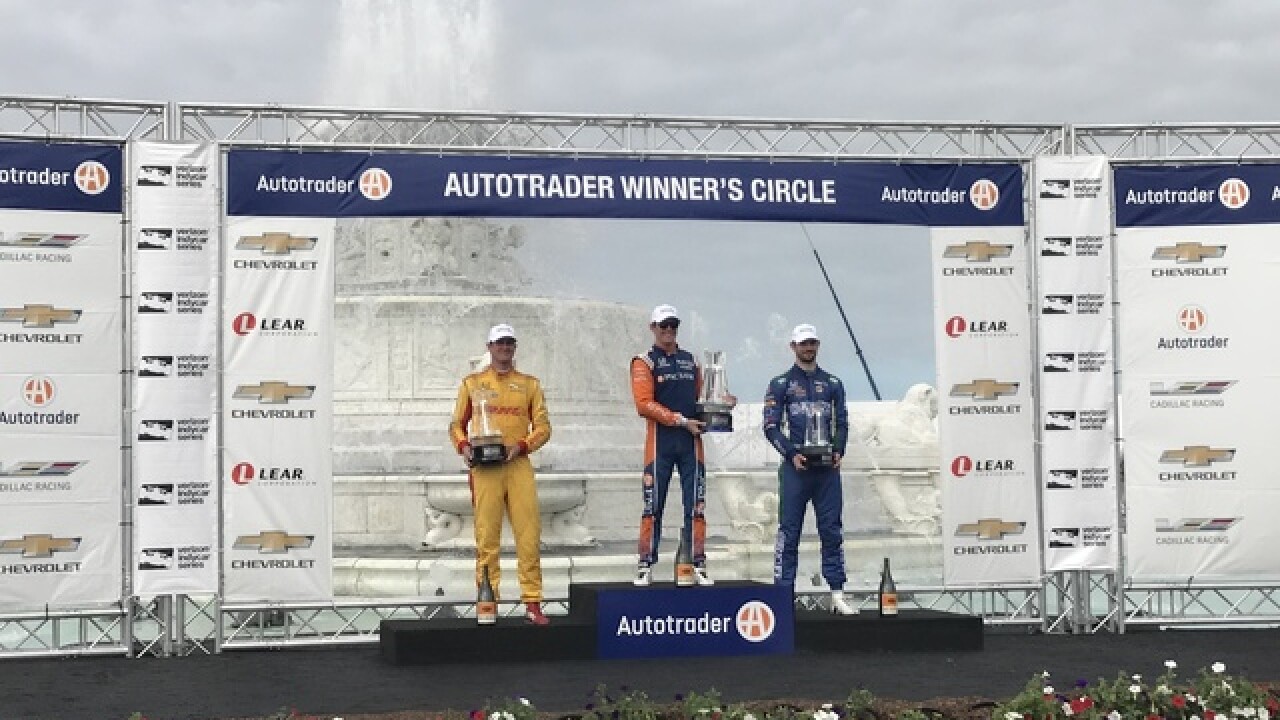 Scott Dixon won his 42nd IndyCar race, pulling even with Michael Andretti for third on the career list.

Dixon did it by outlasting three of Andretti's drivers — including his son.

Dixon raced to his first IndyCar victory of the year, beating Ryan Hunter-Reay by 1.8 seconds at Belle Isle on Saturday. Hunter-Reay drives for Andretti Autosport, and so do Alexander Rossi and Marco Andretti, who finished third and fourth.

"I'm sure Michael was on the radio probably telling Hunter-Reay to get after it a little bit there," Dixon joked.

Dixon hadn't led a lap all season until Saturday, but this was his fourth top-five finish in seven races in 2018. IndyCar's active leader in victories, Dixon now has at least one in each of the last 14 seasons. This was also his 99th top-three finish, breaking a tie for fourth with Al Unser on that list.

In the first of two IndyCar races this weekend at Belle Isle, Dixon led for 39 of the 70 laps on the 2.35-mile street course. After starting on the pole, Marco Andretti was in front for the first 22 laps before giving up the lead during a cycle of pit stops.

"We wanted to stay as close as possible just in case they pitted quite early," Dixon said. "We knew they kind of had to get to lap 20 to make it work anyway, and then we started to pile on the pressure a little bit there to be close on that pit stop exchange."

The only other drivers to lead were Hunter-Reay and Graham Rahal. After winning both Belle Isle races last year, Rahal crashed out of this one after 45 laps, hitting the wall coming out of a turn.

Santino Ferrucci, making his first IndyCar start two days after his 20th birthday, crashed a short while after Rahal when he spun 360 degrees before ending up in a tire barrier. Charlie Kimball was given a penalty for avoidable contact.

The restart following Ferrucci's crash came with 10 laps to go. Dixon led after the green flag and was in control the rest of the way in his No. 9 Honda.

Afterward, Hunter-Reay and Rossi were informed that Dixon was now even with Michael Andretti, their team owner. They were also asked if they'd like to see Dixon move ahead of him.

"I think it's our job — it's in our job description contract to make sure that he does not pass Michael," Rossi added.

"That's our job now," Hunter-Reay joked. "That's what we're going to talk about every morning."

Rossi took over the season points lead. Indianapolis 500 winner Will Power dropped from first to third in the standings with a seventh-place showing at Belle Isle. Dixon is now second.

Dixon won at Belle Isle for the second time. He also did it in 2012. This was the 104th IndyCar win for Chip Ganassi Racing and the first of this year.

Dixon was second in qualifying.

WHO'S HOT: Chevrolet was a title sponsor of this race, but Honda dominated, finishing with the top six drivers.

"They beat us in the Honda Grand Prix of Alabama," Rossi said. "This is our revenge."

Josef Newgarden won that race in Alabama in April.

WHO'S NOT: James Hinchcliffe missed the Indy 500 after being bumped from the field in qualifying. He finished 11th Saturday and wasn't a factor.

UP NEXT: The second of the Belle Isle races is Sunday, with qualifying scheduled for the morning.