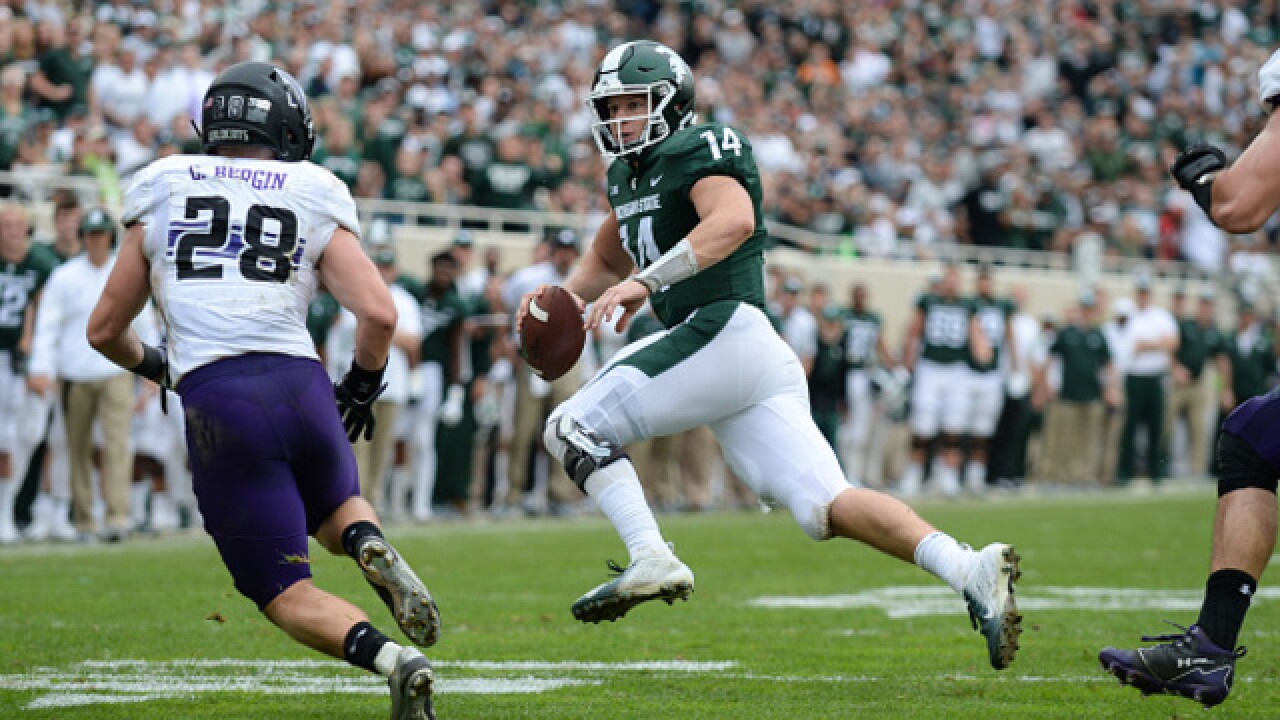 EAST LANSING, Mich. (AP) — Mark Dantonio had plenty of reasons for his frustration after Michigan State's loss to Northwestern.

One particular stretch stood out.

Down by three in the latter half of the fourth quarter, the Spartans twice had the ball and went nowhere. Quarterback Brian Lewerke was under heavy pressure, and Michigan State couldn't even make a first down.

"It didn't give us a chance to be successful," Dantonio said Tuesday. "That just looks like we're not playing on one cylinder, let alone all cylinders."

With tough games against Penn State and Michigan coming up, the Spartans don't have much time to fix their leaky offensive line. Whatever chance Michigan State had to rally last weekend went by the wayside in large part because of poor pass protection, and what figured to be a solid line with four returning starters is now viewed — from the outside, at least — as a liability.

"We just know we've got to put it on ourselves to take control of this offensive line and get this offense going," guard Blake Bueter said. "We do hear that stuff, and it kind of puts a chip on our shoulder and lets us know that we're not where we need to be at yet."

Michigan State lost only one starter on offense from last season — center Brian Allen — but the offensive line hasn't been at full strength. Junior tackle Cole Chewins missed this season's opener and has played only 74 snaps in the four games since. Guard Kevin Jarvis has missed the past two games, and guard David Beedle — a fifth-year senior — went down early in the Northwestern game and is expected to be out for a month.

The Spartans play at No. 8 Penn State on Saturday, and the Nittany Lions aren't likely to have much sympathy for Michigan State's injury woes. Dantonio has little choice but to coach whoever is healthy.

"Chewins is back healthier now so that allows us to put him at left tackle," Dantonio said. "Allows us to move Tyler Higby to left guard, which is where he played predominantly last year."

Higby has started twice at center and three times at left tackle this season.

Michigan State leads the nation in rushing defense, but the Spartans are 109th in rushing offense and have allowed 12 sacks in five games. Their inability to control the line of scrimmage was jarring toward the end of their loss to Northwestern.

Down 22-19 with 6:41 remaining, the Spartans took over at their own 20-yard line. They lost 6 yards on a completed pass, and then Lewerke was sacked for a loss of 4. A holding penalty pushed them back 5 more yards, and they eventually had to punt.

On Michigan State's next possession, the Spartans stalled after a 9-yard gain on first down. Lewerke was nearly sacked on both second and third down, and after incompletions on those plays, the Spartans were stopped on fourth-and-1. Northwestern went on to win 29-19 .

With Penn State coming up and Michigan on the horizon, any adjustments Michigan State can make would figure to come soon. But Dantonio isn't wavering on his commitment to the running game.

"I can point to numerous offensive lines across this country that aren't playing very well together. All you've got to do is put the tape on and watch them," he said. "We'll keep pushing it. When we came here in 2007, you know, the one thing that I said is, hey, we're going to run the football. We have to run the football. I still believe that, and we've got to find ways to do that."

It's hard to imagine an improved running game — or a consistent passing attack — without improved play from Michigan State's offensive line.

"A lot's put on us," center Matt Allen said. "We've really been trying to demand just execution and playing physical in practice and being able to do that same thing on Saturday."