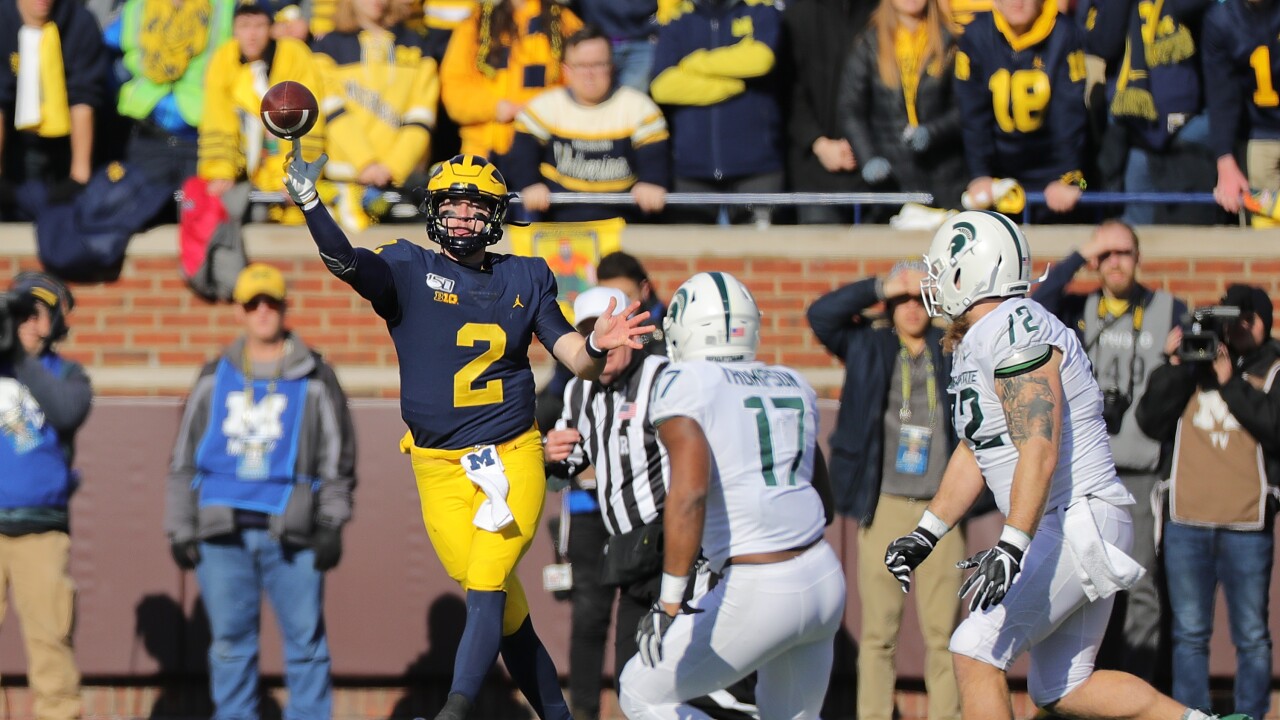 ANN ARBOR, Mich. (AP) -- Shea Patterson had his best game at Michigan, picking apart a wounded rival to the left, right over the middle and deep.

Patterson threw for 384 yards -- his highest total since he played for Mississippi -- and four touchdowns to lead the 14th-ranked Wolverines to a 44-10 rout over Michigan State on Saturday.

"This one is special," Patterson said. "I'm proud of be part of this team and part of a dominating win like that."

Showing no mercy up nearly four touchdowns late in the game, Patterson threw on third-and-2 and connected with Cornelius Johnson for a 39-yard score.

Johnson fooled the defense by looking as if he was going to block before he broke down field and got wide open.

"That play was designed," Patterson said.

The Spartans (4-6, 2-5) must win at Rutgers and against Maryland to be bowl eligible after unraveling this season with a five-game losing streak.

"As soon as we roll over, I said this a few weeks ago, it can be a lot worse than this. A lot worse," linebacker Antjuan Simmons said. "We've just got to keep fighting and show we're tough, and we're not going to quit."

Michigan State got off to a solid start, leading 7-0 after the first quarter on Brian Lewerke's 1-yard pass to Max Rosenthal.

The offensively challenged Spartans did little with the ball and simply couldn't stop Michigan in the air.

"The plan wasn't to pass the game all game, but our guys were getting into open space and making plays," Patterson said.

Patterson completed 24 of 33 passes, but deflected credit to his teammates on offense.

"O Line did a heck of a job giving me time and receivers found open space," he said.

"I call that a whale of a game," coach Jim Harbaugh said.

Ronnie Bell had nine catches for a career-high 150 yards for the Wolverines, who haven't lost at home since closing the 2017 season with a loss to rival Ohio State.

"There was just something special in the way shea was throwing the football," Bell said.

Michigan finished with 467 yards of offense -- gaining 7 yards per play -- and punted only on the opening possession of the game.

Lewerke was 17 of 30 for 166 yards with a TD and two interceptions on poorly thrown passes. Elijah Collins was limited to 27 yards rushing on 12 carries a week after running for 170 yards and two touchdowns in a collapsing loss to Illinois.

Michigan State had won eight of 11 in the rivalry and two straight at the Big House. The Wolverines have now won two in a row in the series for the first time since winning six consecutive from 2002-2007.

Simmons said he chose his college because of Dantonio and he has not lost faith in him.

Michigan may move up a little in The Associated Press poll and the College Football Playoff standings.

The officials tried to keep the emotionally charged game in check, throwing a lot of flags in an attempt to rein in players on both sides. Michigan had nine penalties for 91 yards. Michigan State was flagged seven times for 93 yards and Jacub Panasiuk was ejected in the second half after being called for roughing the passer.

"It was chippy during the games with words being said," Hudson said. "I feel like the refs did a good job of calming both teams down."