Speight speaks out on decision to leave Michigan: 'Time to leave home' 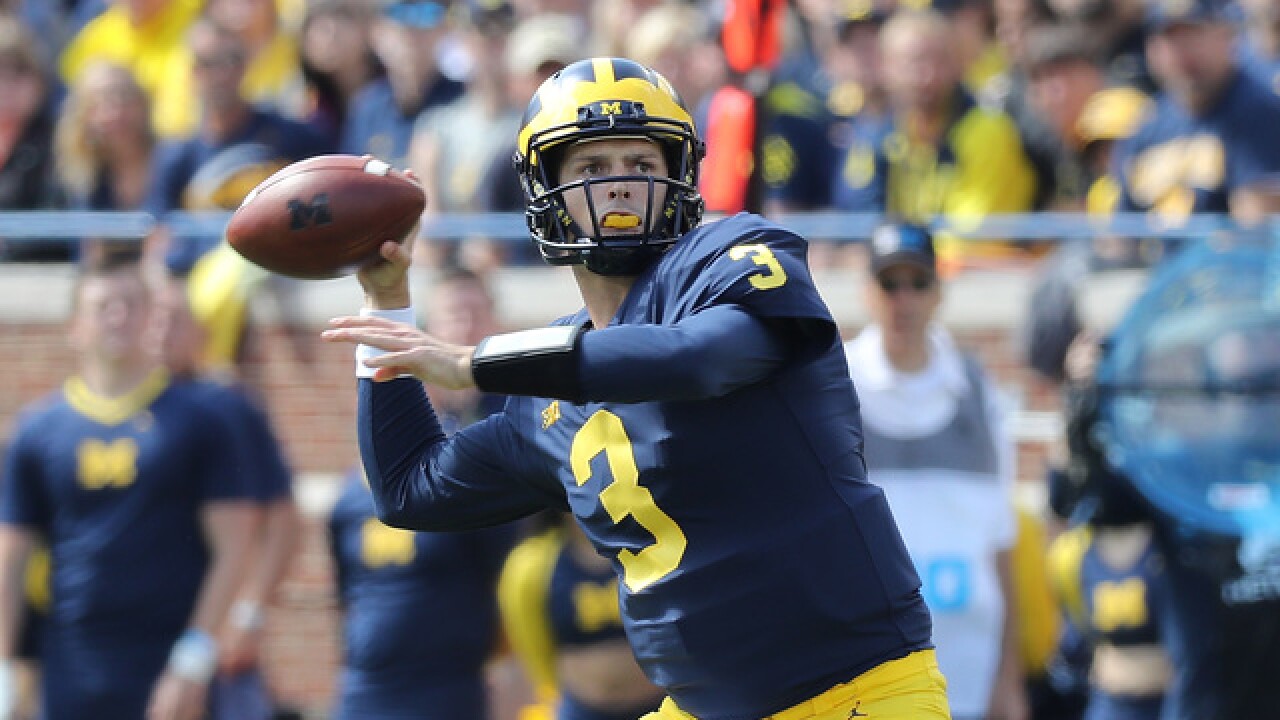 Copyright Getty Images
Leon Halip
<p>ANN ARBOR, MI - SEPTEMBER 9: Wilton Speight #3 of the Michigan Wolverines drops back to pass during the first quarter of the game against the Cincinnati Bearcats at Michigan Stadium on September 9, 2017 in Ann Arbor, Michigan.(Photo by Leon Halip/Getty Images)</p>

When Michigan began its season with a roster full of turnover, it seemed like quarterback was a secure position with Wilton Speight returning as the starter.

Looking back now, it appears the competition that started the year between Speight and John O’Korn may have been one of the early factors in Speight’s decision to ultimately leave the program.

The 22-year-old quarterback, who announced his decision to leave the Wolverines on Sunday, would not say that himself when WXYZ spoke with him in his Ann Arbor apartment on Monday. He’s trying to leave the team gracefully.

“It’s been a wild ride, but I wouldn’t trade anything, and there’s absolutely no bad blood,” Speight said in an interview less than 24 hours after he made his decision public.

Speight led the Wolverines to a bumpy 3-0 start to the season, then suffered three broken vertebrae in the fourth game of the year against Purdue. He never returned to play, but hopes to continue his college career elsewhere next season.

“There are certain things that are maybe hard to put into words. I have always been in quarterback competitions. At the bus last year, Coach Harbaugh said I’m gonna be a top quarterback in all of college football this season. Then the first spring practice happened and I was splitting reps,” he recalled.

Speight and O’Korn didn’t find out who was starting the opener against Florida until the week of practice leading up to the game.

“It was a whole other competition again. It wasn’t that I’m not coming back because of the competition thing, and I think that’s what a lot of people maybe think,” Speight added. “I’ve done that. I’ve proven time and time again that I love competition, and came out on top two years in a row.”

The Virginia native wouldn’t give one main reason for his decision. He acknowledged Brandon Peters took command of the job when he finally got his chance to replace O’Korn. Speight also said he’s talked about the decision for nearly seven weeks with his parents.

“I’ve been here for four years, and it’s just one of these feelings where it’s just time, I think, to move on,” Speight said.

He said transferring is a move his assistant coaches may have been expecting for a while. Jim Harbaugh, according to Speight, was surprised.

He quickly told his coach that wasn’t the idea behind his move.

“I told him, 'I don’t want you to think this has anything to do with you or about our relationship,' because obviously you’re gonna butt heads with your coach — especially when he was so successful at this very position at Michigan. Yeah, we butted heads every once in a while, but it made our relationship stronger and he had my back through literally everything," he said.

Speight said he’s had schools reach out since he posted his goodbye to Michigan on Instagram. He hopes to make a decision in the next three to four weeks, and wants to make it clear: he has hopes to be an early NFL draft pick and continue his playing days on Sundays.

"It didn't come down to anything in particular," he said. "It was just really a gut feeling where I had to leave home."