Spieth back in his comfort zone, early lead at Masters 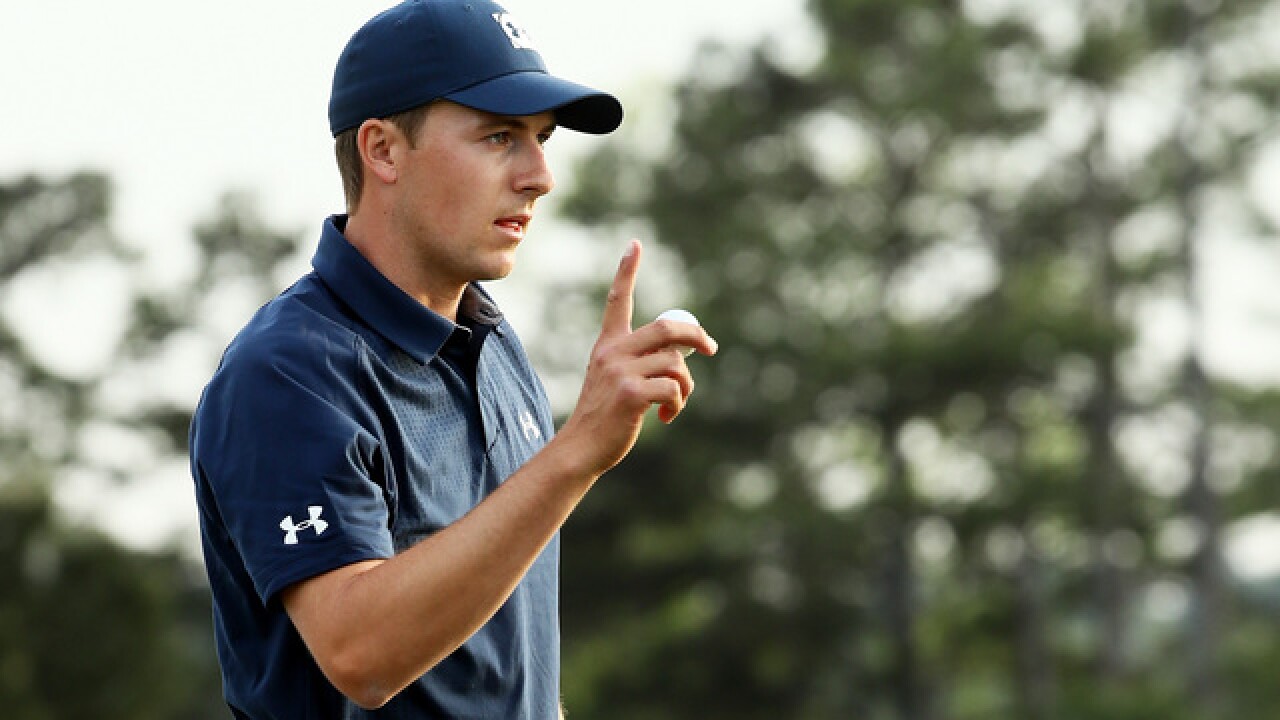 Copyright Getty Images
Jamie Squire
<p>AUGUSTA, GA - APRIL 05: Jordan Spieth of the United States reacts on the 18th green during the first round of the 2018 Masters Tournament at Augusta National Golf Club on April 5, 2018 in Augusta, Georgia. (Photo by Jamie Squire/Getty Images)</p>

AUGUSTA, Ga. (AP) — No other course makes him more comfortable. Even more familiar than a sharp short game was his name atop the leaderboard at the Masters.

Jordan Spieth appears to be back on his game.

He has some catching up to do.

Spieth took only 10 putts on the back nine Thursday at Augusta National, including five straight birdies. The last one was from tap-in range after another superb pitch, from the left gallery to escape with bogey for a 6-under 66 and a two-shot lead over Matt Kuchar and Tony Finau.

It was the eighth time in his last 13 rounds at the Masters that Spieth ended a round with the lead.

“I know as well as anybody that anything can happen at Augusta National,” Spieth said, a vague reference to the lead he lost on the back nine in 2016 that kept him from winning consecutive green jackets. “It’s about riding momentum from last week and this round.”

Woods, the main attraction in his first time back to the Masters since 2015, had a few bright moments and endless ovations in his round of 73. He felt he played better than he scored. He also knows it could have been worse, especially after dumping a 9-iron into Rae’s Creek on the par-3 12th hole and having to make a 15-foot putt for bogey and avoid falling to 4-over par.

Most aggravating was playing the par 5s without a birdie.

“Seventy-three is fine,” Woods said. “By the end of the week, this will be a pretty packed leaderboard the way the golf course is set up. They have it right where they want it. It’s really hard to run away from it, but it’s also really easy to lose it out there.”

Spieth nearly managed to pull away when he began the back nine with three tough par saves, ran off five straight birdies and overcame a wild drive left into the trees that left him some 250 yards for his third shot.

The best comeback? That might now belong to Finau.

On the eve of his first Masters, he made a hole-in-one on the seventh hole of the Par 3 Tournament, raced toward the green to celebrate and as he turned back toward the tee, his left ankle rolled. Finau went down, the ankle contorted, and he popped it into place. He wasn’t sure he could play until tests showed he was cleared to play.

And he played great, opening with a 68 despite a short par putt that he missed on the 14th hole.

“This is a moment I’ve dreamed of my whole life,” Finau said.

Woods might be right about one thing. Even as well as Spieth looked, it might be hard for anyone to pull away. Spieth was among 10 players who broke 70 — a list that included Rory McIlroy — on a warm, sunny day with a moderate breeze that looked ideal for scoring.

It was just tough to score, with the greens slick and firm and several tough pin positions, mainly toward the front of the greens. That included the par-5 15th, and no one suffered quite like defending champion Sergio Garcia.

He hit his second shot into the water, and then had his next four shots with a wedge roll back into the water. He made a 10-foot putt — close to the same length of his eagle putt when he won last year — to make a 13, the highest score ever recorded on No. 15. He wound up with an 81, the highest score in the opening round by a defending Masters champion.

“It’s the first time in my career where I make a 13 without missing a shot,” Garcia said. “Simple as that.”

McIlroy, needing a green jacket to complete the career Grand Slam, did his part to stay in the game, especially with some tough par-saving putts down the stretch as Spieth was on his run of birdies.

McIlroy shot a 69, the first time he broke 70 in the opening round of the Masters since 2011, and joined a half-dozen other players at 69 that included Henrik Stenson, Charley Hoffman, Patrick Reed and 22-year-old Li Haotong of China.

Phil Mickelson and Rickie Fowler were among those at 70. So was Marc Leishman, who played in the group with Woods and Tommy Fleetwood and led most of the day until a chip from behind the 15th green came out too strong and didn’t stop rolling until it was headed down the bank and into the water, leading to double bogey.

Woods, dressed all in black, was under par for all of one hole. His drive on No. 3 nearly reached the green until it rolled back down the slope, and he hit a safe pitch to about 10 feet for birdie. He made bogey from the bunker on No. .4. He three-putted from long range on No. 5. And he never got back to par, losing even more ground around Amen Corner.

In one sense, he was happy to be playing. Just under a year ago, he was going through a fourth back surgery.

“I played in a major championship again,” he said. “But also the fact that I got myself back in this tournament, and I could have easily let it slip away. And I fought hard to get it back in there, and I’m back in this championship. There’s a lot of holes to be played.”