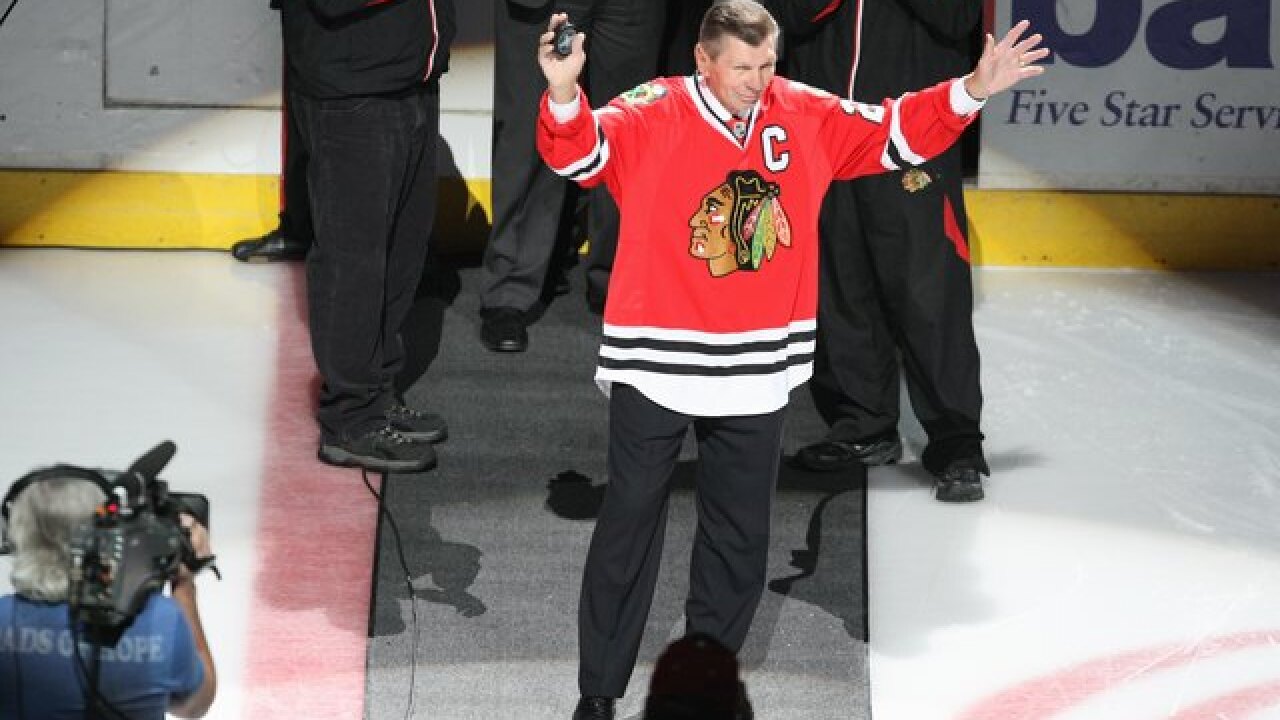 Copyright Getty Images
Jonathan Daniel
<p>CHICAGO - APRIL 25: Former Chicago Blackhawks player Stan Mikita waves to the crowd prior to the start of play against the Calgary Flames during Game Five of the Western Conference Quarterfinals of the 2009 Stanley Cup Playoffs on April 25, 2009 at the United Center in Chicago, Illinois. (Photo by Jonathan Daniel/Getty Images)</p>

CHICAGO (AP) -- When Stan Mikita got back together with the Chicago Blackhawks, it was clear how much the reconciliation meant to the Hall of Fame forward.

He became a team ambassador, and then got a bronze statue outside the United Center. He was a regular at home games, drawing loud cheers when he was shown on the videoboard, often with former teammate Bobby Hull right beside him.

"I was proud to wear the Indianhead uniform for 22 years," Mikita said when he was honored before a 2008 home game.

Made it look good, too.

The Blackhawks lost one of the most revered figures in franchise history when Mikita died Tuesday. The former captain, who helped Chicago to the 1961 Stanley Cup title, was 78.

Mikita's family announced his death in a statement released by the team. No further details were provided, but he had been in poor health after being diagnosed with Lewy body dementia -- a progressive disease that causes problems with thinking, movement, behavior and mood.

"He was surrounded by his loving family whom he fiercely loved," the family said in the statement. "Details of planned services will be released when they become available. We respectfully ask for privacy at this time."

Mikita remains the only NHL player in history to win the Art Ross (scoring champion), Hart (MVP) and Lady Byng (sportsmanship) trophies in the same season, and he accomplished the feat in consecutive years in 1967 and 1968. He became the first player to have his jersey retired by the Blackhawks in 1980, and was inducted into the hockey Hall of Fame three years later.

"Stan Mikita will be always remembered as a champion, an innovator and a master of the game," team president John McDonough said. "He embodied the Chicago Blackhawks."

NHL Commissioner Gary Bettman called Mikita "one of the greatest players in NHL history and a Chicago icon," and highlighted his work to improve the game.

"He designed the distinctive helmet he donned later in his career, when that still was a rarity," Bettman said in a statement. "He curved his stick blade to an extent previously unthinkable, causing his shot to do tricks. He utterly transformed his playing style in his prime, going from one of the league's most penalized players to one of its most gentlemanly."

Mikita's relationship with the Blackhawks deteriorated over time, but the franchise reached out to him after longtime owner William Wirtz died in 2007 and his son, Rocky, took over. The return of Mikita and Hull was a key moment in the transformation of the Blackhawks from one of the NHL's worst franchises to its current place among the best run organizations in sports.

"There are no words to describe our sadness over Stan's passing," Rocky Wirtz said. "He meant so much to the Chicago Blackhawks, to the game of hockey, and to all of Chicago."

The 5-foot-9 Mikita, who was born in Czechoslavakia and moved to Canada in 1948, was just 18 when he joined a mediocre Blackhawks franchise in 1959. He made his debut at home against mighty Montreal, and his first faceoff came against Jean Beliveau during his prime.

"I was still in a daze when I went out to take that faceoff against a legend like Beliveau, who was around 6-foot-5 and a towering presence on the ice," Mikita wrote in his 2011 book, "Forever a Blackhawk."

"He had to outweigh me by 60 pounds. The faceoff was in Montreal's end. I looked up at him from the circle and wound up staring at his belly button. That's how tall he was. My knees were shaking. My head was spinning. Somehow I got my stick down and managed to get the puck to our point man. Don't ask me who it was. I was too nervous to remember names."

But Mikita showed steady improvement at the start of his career, helping Chicago develop into one of the most feared teams in the league. He had eight goals and 18 assists in his first full season, and then helped the Blackhawks to their first NHL title in 23 years.

Mikita and the Blackhawks played for the Stanley Cup again in 1962, but lost to Toronto in six games. They also lost in the finals in 1965, 1971 and 1973 despite continued postseason success for Mikita, who tops the franchise playoff lists for assists (91), points (150) and games (155).