Team has faded, but some Lions still have a lot at stake 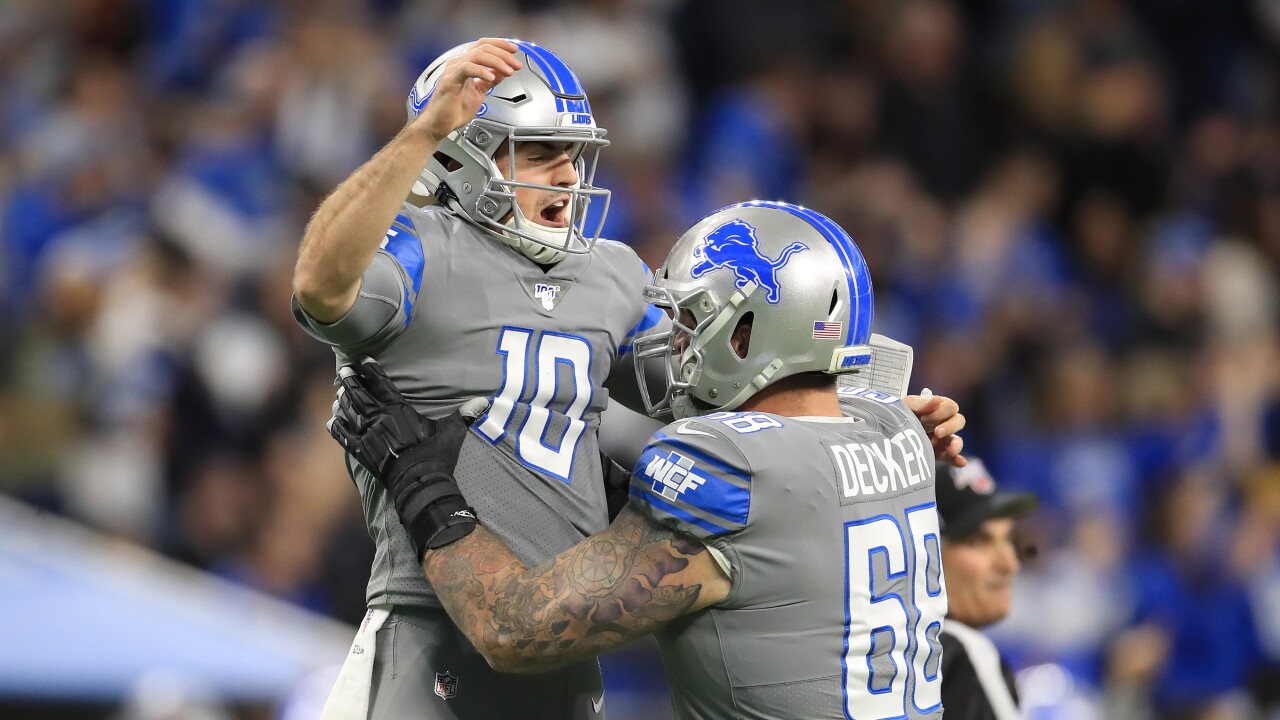 DETROIT (AP) -- Don't tell David Blough about any meaningless games in the NFL.

The Detroit Lions lost again Thursday, another setback in a season that's gone sharply downhill for the past couple months, but it was a productive day for Blough, the third-string quarterback who was making his debut as an undrafted rookie. Blough threw for 280 yards plus two early touchdowns, and although Detroit fell 24-20, his performance underscored the idea that some players have a lot at stake even if the team is out of contention. There's little the Lions can do to salvage a successful 2019 season, but plenty of players on this roster can show they deserve a spot in Detroit's -- or some team's -- future plans.

"I felt comfortable and prepared, and we had a great plan," Blough said. "On the short week even, we had a great plan going into the game and to take our shots. We were hoping they would think a guy like me would come in, throw some check-downs, and so we were going to throw it around a little bit."

Blough threw a 75-yard touchdown pass to Kenny Golladay on his second pass attempt, and he threw a second TD pass before the first quarter was over. Only one undrafted rookie quarterback has ever thrown for more yards in his first career start than Blough. That was Ed Rubbert, a replacement player for Washington during the 1987 strike.

Blough was playing because of injuries to Matthew Stafford and Jeff Driskel. While Stafford is obviously the team's starter, it will be interesting to see what the Lions (3-8-1) do if they have to choose between Driskel and Blough for their next game. Driskel didn't play too badly during his three starts after Stafford went down -- but Blough seemed just as effective, and at 24 he's two years younger than Driskel.

Bo Scarbrough is another player who has gotten an unexpected opportunity for Detroit's short-handed offense. His 83 yards rushing against Chicago brought his three-game total to 236.

The offense continues to look functional even without Stafford and injured running back Kerryon Johnson. Detroit still has some quality receiving targets, and Golladay caught four passes for a career-high 158 yards. It's obviously not as dynamic a group without Stafford, but the offense has remained good enough to keep the Lions in games.

Detroit's pass rush managed only one sack, and Chicago quarterback Mitchell Trubisky had entirely too much time to pick out receivers. He threw for 338 yards and three touchdowns.

"The quarterback kind of extended a lot of plays and made a lot of plays on the run," cornerback Darius Slay said. "We have to do better in the back end, extending plays, finding our guys, plastering around. What they did was extend plays, and they overall just were controlling the game almost."

Blough is the obvious choice here. The Purdue product joined a pretty impressive list of quarterbacks who have thrown for at least 130 yards and two touchdowns in a first quarter this season. The others are Patrick Mahomes, Lamar Jackson and Aaron Rodgers.

"You see college tape and the things that he did. He had some pretty big games in college," coach Matt Patricia said.

Offensive coordinator Darrell Bevell deserves credit for having Blough and the offense prepared after a short week.

Cornerback Justin Coleman had a rough day, allowing a couple crucial catches as Chicago drove for the winning touchdown late in the fourth quarter.

Rookie tight end T.J. Hockenson appeared to hurt himself late in the game. The Lions did get defensive end Trey Flowers back after he was sidelined by concussion issues. He had Detroit's lone sack.

87.6 -- The passer rating for Blough, which was the highest by a Lions quarterback in his debut.

As usual after their Thanksgiving game, the Lions have some time off before taking the field again. They host Minnesota on Dec. 8.

Detroit is 0-4 within the NFC North.