The day the Stanley Cup went missing -- in Siberia 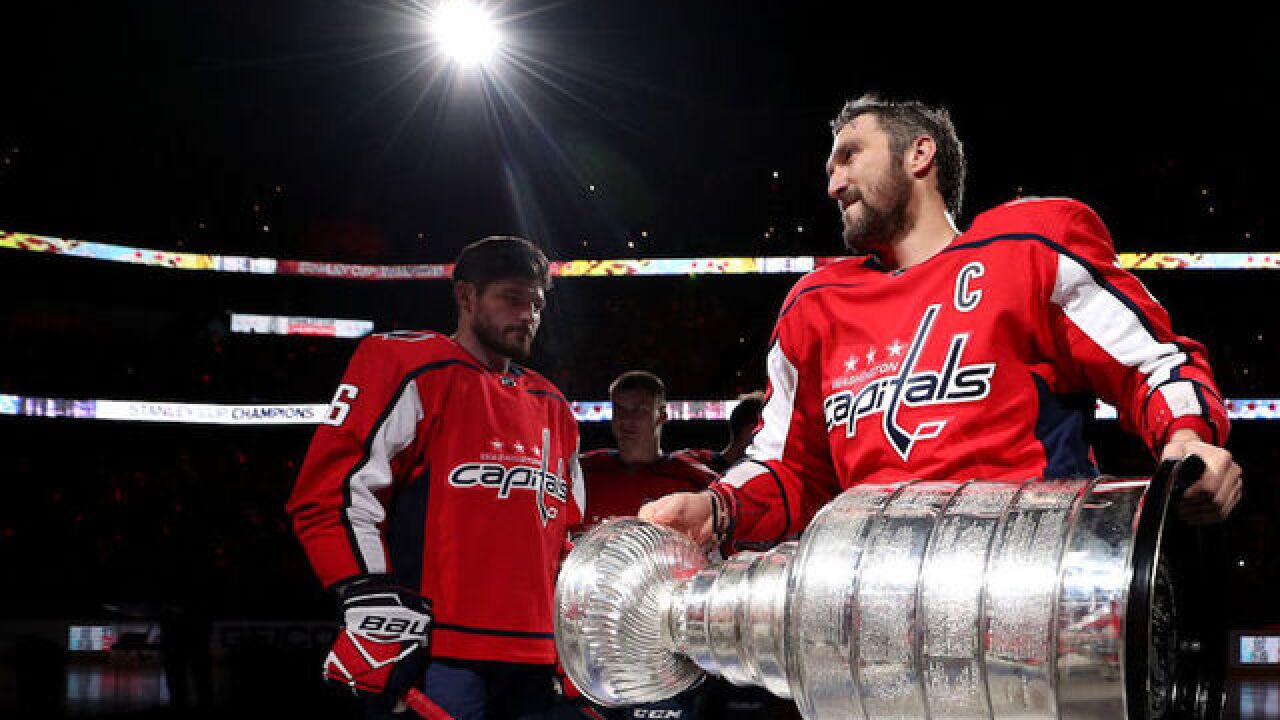 Copyright Getty Images
Patrick Smith
<p>WASHINGTON, DC - OCTOBER 03: Alex Ovechkin #8 of the Washington Capitals skates with the Stanley Cup prior to watching the 2018 Stanley Cup Championship banner rise to the rafters before playing against the Boston Bruins at Capital One Arena on October 3, 2018 in Washington, DC. (Photo by Patrick Smith/Getty Images)</p>

Most people have had that sinking feeling of waiting at the airport carousel only to discover their luggage has gone AWOL.

So imagine how Phil Pritchard felt when he found out that the 125-year-old Stanley Cup -- one of the most iconic trophies in sport -- had gone missing in Siberia.

For 30 years, Pritchard has been the curator at the Hockey Hall of Fame in Toronto, Canada.

He is more widely known around the world as "The Keeper of the Cup," playing a vital part in a storied custom -- chaperoning the 35-pound trophy to each member of the team that wins the National Hockey League's championship.

Pritchard readily admits he's biased but for him the way the Stanley Cup is taken to each member of the winning team is the greatest post-championship tradition in sports.

"The green jacket, the (milk) chug, all of that, are awesome," Pritchard told CNN Sport, referring to traditions associated with the Masters at Augusta and the Indianapolis 500.

"They are great traditions. They are designed for individual sport though. The great thing about hockey is it's the ultimate team sport. Everyone on the team knows, the team is much more than the players on the ice.

"They want to share (the cup) with their family, their friends, their coaches, their grandparents, their teachers ... that Zamboni driver that used to let them stay on the ice an extra 20 minutes ... the guy that used to put extra cheese on the pizza.

"There is nothing better than the opportunity for the Stanley Cup winning team to bring the cup home for a day."

This summer, the daunting task was once again left to Pritchard and his staff to map out a schedule so that each member of the 2018 NHL champion Washington Capitals got to spend their day with the cup.

It's a process Prichard refers to as "organized chaos." No matter where the victor lives -- whether it's Prague, Malmo, or Lashburn, Saskatchewan -- the coveted trophy will be hand-delivered and ready to be shared.

Traversing 86 countries and counting, the three-foot high cup has been the centerpiece at many celebratory parties.

It's been used as the world's most ornate keg stand for champagne, beer, wine and whiskey. Not forgetting the times Cap'n Crunch's Crunch Berries, caviar, horse feed and Koldskål has filled the top-tiered cup.

This August, after many victorious Caps had joyously spent their day hosting the cup in their hometowns, the famed trophy headed towards the southwestern Siberian city of Novokuznetsk in Russia.

Capitals defenseman Dmitry Orlov was slated to share the merriment with everyone in town, with a stage set up for the blueliner to pose for countless pictures with pride-filled fans.

"It's the first time in history Novokuznetsk got a cup and (I'm) the first player to win. So it's a really special moment ... but we have a little trouble with the cup," Orlov told the Capitals video team.

Except for Pritchard this wasn't just a "little trouble" -- this was a historical heirloom.

"We were in Chelyabinsk with (Capitals forward) Evgeny Kuznetsov," said Pritchard. "We went from Chelyabinsk to Moscow, Moscow to Novokuznetsk. In Siberia, everything kinda goes through Moscow.

"You can't just go Chelyabinsk to Novokuznetsk. So we had to go all the way back to Moscow and then fly to Novokuznetsk which was a five-hour flight and four time zones.

"We count so much on the airlines, the flight attendants, the people checking us in. We had a translator with us.

"And we confirmed: 'Yeah everything was on the flight' and then when we arrive into Novokuznetsk -- which has one flight a day -- and (the cup) is not on there ... your heart just drops."

"When something like that happens, it puts a whole wrench in the plan. It's stressful for everybody. The other guy who was with me on the Cup tour, Mario Della-Savia and I especially, because we were the guys bringing the Cup."

With Prtichard, Della-Savia and other Caps staff not speaking Russian, the 27-year-old Orlov got to work, discovering that the Cup had missed its connection and then with the help of Novokuznetsk's government officials how to then get it to the town.

"Dmitry was on the phone," recalls Pritchard. "We had the mayor Novokuznetsk with us. We had the governor from the region. And they were on the phone.

"They got it flown (from Moscow) to a close town (Novosibirsk). And then Dmitry, through some contacts, had a helicopter bring it from that town into Novokuznetsk."

The helicopter proved key -- Novosibirsk is a four-hour drive to Novokuznetsk.

"Because every minute every hour is so important to us ... we should (have) start(ed) at one o'clock but right now its already almost six," recounted Orlov. "I can't wait."

Orlov had scored his own proverbial off-the-ice overtime winner by orchestrating the cup's final leg to his hometown.

"It was pretty cool when they were making the announcement that 'Dmitry will be here shortly and it's coming in by helicopter,'" explained Pritchard.

"Then the helicopter goes right over the center of the square in town and people are cheering ... you can see the smile on Dmitry's face, you can see the relief on his face, 'cause it had been eight hours (late).

"When he hoisted it over his head, it was so special. He was so proud. 'Cause he wanted to bring it home.

"For each of the guys, they're proud to be from their town -- wherever it is.

"You can certainly see the power, the emotions of that, it's incredible. From an outsider, as 'The Keeper of the Cup' we see it in all of them. The emotions are unbelievable."