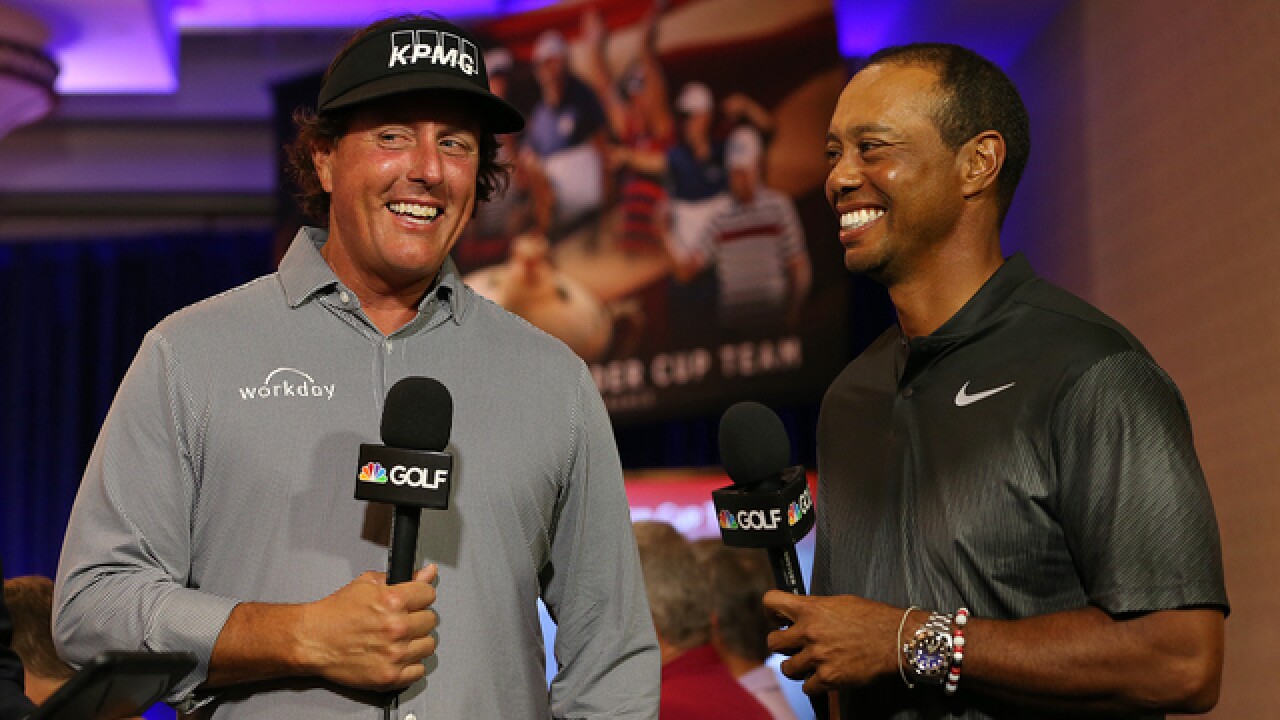 Copyright Getty Images
Rich Schultz
<p>WEST CONSHOHOCKEN, PA - SEPTEMBER 04: Phil Mickelson and Tiger Woods are interviewed by the Golf Channel after being named as Captain's Picks along with Bryson DeChambeau by U.S. Ryder Cup Captain for the 2018 U.S. team during a press conference at the Philadelphia Marriott West on September 4, 2018 in West Conshohocken, Pennsylvania. (Photo by Rich Schultz/Getty Images)</p>

WEST CONSHOHOCKEN, Pa. — Tiger Woods and Phil Mickelson, golf’s most prominent players for more than two decades, never realized the Ryder Cup would mean so much.

For Woods, it’s the culmination of a comeback that began in January after a fourth surgery on his lower back. For Mickelson, more than setting a record by playing his 12th Ryder Cup, the 48-year-old gets what he believes will be his last chance to capture that gold trophy away from home.

U.S. captain Jim Furyk added them to his team Monday evening as wild card selections, along with Bryson DeChambeau.

Woods agreed to be a vice captain in late February, and he set a goal to be in Paris on Sept. 28-30 as a player.

“It’s incredible, it really is, to look back at the start of the year and now to have accomplished a goal like that,” Woods said. “To be a part of this team, and now to be a player is just ... beyond special.”

Mickelson had qualified for every team since 1995, a streak that ended this year when he finished No. 10 in the standings. His 12th appearance breaks the Ryder Cup record held by Nick Faldo.

Mickelson has only been on three winning teams — at Brookline in 1999, Valhalla in 2008 and two years ago at Hazeltine. His last time overseas was at Gleneagles, where he infamously closed out a losing press conference by questioning captain Tom Watson and the direction the PGA of America was taking the U.S. team.

That led to sweeping changes in the U.S. structure, mainly by giving players a stronger voice.

“This is mostly likely my last chance to go over to Europe and to be a part of a winning U.S. team in Europe. We haven’t done that in 25 years,” Mickelson said. “I set out this year on really a strong commitment and journey to get on the team. I got off to a great start this year. It’s been a really good year, and although I fell just shy of making it on points, it feels great to be a part of this team and serve this team in any way I can.”

Furyk still has one more captain’s pick he will announce Monday after the BMW Championship, and it might not be as easy as this one.

“Not that it was an easy decision,” Furyk said with a smile. “But it could have been a lot more difficult.”

Woods and Mickelson were logical choices. Woods briefly had the lead on Sunday at the British Open until he tied for sixth, and he shot a career-best final round of 64 to finish second in the PGA Championship. Mickelson won another World Golf Championship in March, though he hasn’t seriously contended since then.

DeChambeau narrowly missed out on one of the eight automatic spots by missing the cut at the PGA Championship, and the 24-year-old SMU product knew he had to show Furyk some form in the three weeks before the picks were announced.

“I wanted to be a part of this experience so badly that I worked twice as hard,” DeChambeau said. “And it showed, and it paid off.”

Tony Finau is believed to be the leading candidate for 12th and final spot. Furyk invited him as part of a small group that played Le Golf National on the weekend before the British Open. Finau tied a PGA Championship record with 10 birdies in the second round while playing with Furyk.

During the FedEx Cup playoffs, he was runner-up at one event and tied for fourth at the other.

European captain Thomas Bjorn announces his wild-card selections on Wednesday, with Henrik Stenson, Ian Poulter and Paul Casey among the likely picks. Still to be determined was whether former Masters champion Sergio Garcia, who failed to qualify for the FedEx Cup playoffs, gets a nod.

The eight Americans who qualified on their own were Brooks Koepka, Dustin Johnson, Jordan Spieth, Justin Thomas, Rickie Fowler, Bubba Watson, Webb Simpson and Patrick Reed. Throw in Woods and Mickelson, and that gives the U.S. team a lineup that has combined for 31 majors.

That doesn’t mean as much in foursomes and fourballs, on a European course before the singing and chanting of Europeans fans.

“We’re heading over into foreign soil,” Furyk said. “It’s going to be an interesting crowd. They are boisterous, I have a lot of respect for them and we are looking for players that we thought would handle that situation well and would thrive, love the challenge. And naming these three players, that’s what we’ve done.”

Woods will no longer be a vice captain, though Furyk said he would continue to lean on his advice. Woods was an assistant at Hazeltine and at the Presidents Cup last fall at Liberty National in a U.S. route.