Tigers bats stay cold as they get swept by A's 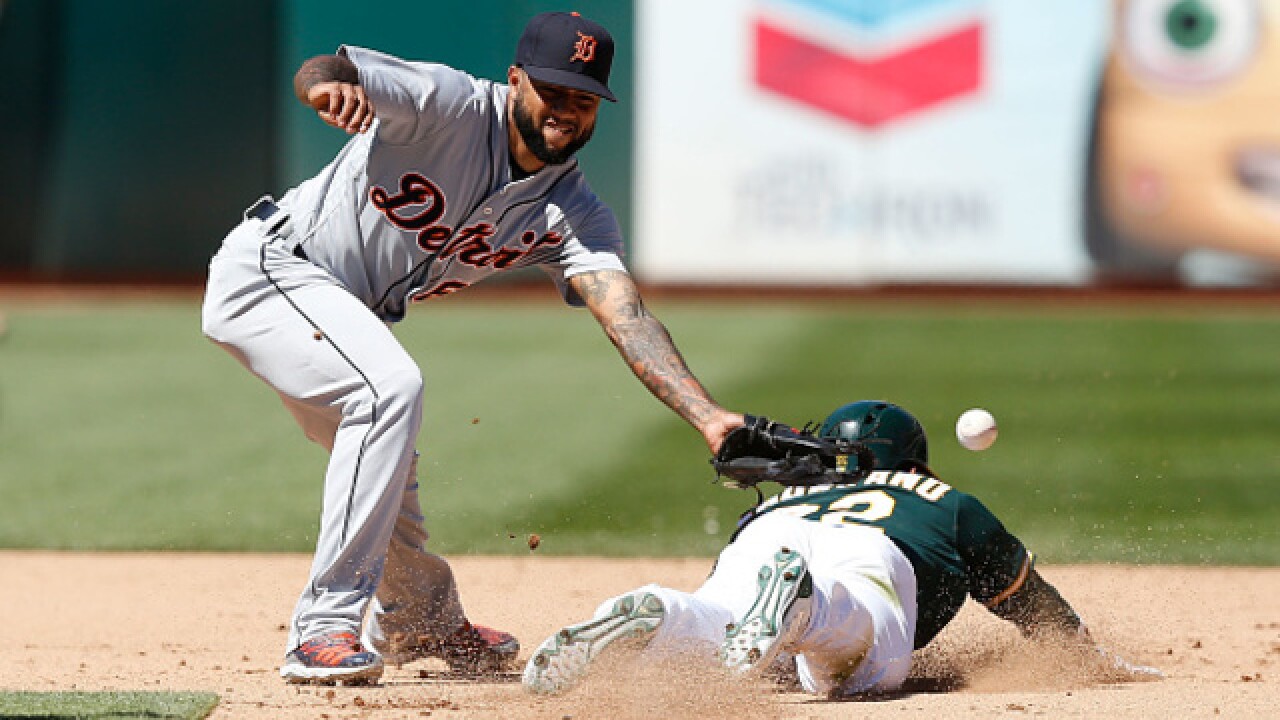 Copyright 2018 Scripps Media, Inc. All rights reserved. This material may not be published, broadcast, rewritten, or redistributed.
Lachlan Cunningham
<p>OAKLAND, CA - AUGUST 05: Ramon Laureano #22 of the Oakland Athletics steals second base as Ronny Rodriguez #60 of the Detroit Tigers is unable to make the out in the seventh inning at Oakland Alameda Coliseum on August 5, 2018 in Oakland, California. (Photo by Lachlan Cunningham/Getty Images)</p>

While the Oakland Athletics continue their long quest for a new stadium, Trevor Cahill and Khris Davis couldn't be more comfortable in the team's current home.

Cahill struck out 10 in six innings, Davis and Matt Chapman both homered for the second consecutive game and the A's beat the Detroit Tigers 6-0 on Sunday to complete a season sweep.

"We're on a nice roll right now," said manager Bob Melvin, whose team has won eight straight at the Oakland Coliseum. "The more games you win, the more confidence you have. It seems to be playing out right now."

Matt Olson also homered and Ramon Laureano added three hits and an RBI to help the streaking A's win their sixth in a row overall.

Oakland won all seven games against Detroit this season and has a franchise-record 12 consecutive victories over the Tigers.

The A's blanked the Tigers on Friday night and allowed only an unearned run Saturday. It's the first time in Oakland history that the team did not give up an earned run in a series of three or more games.

"We know the bullpen's the strength," Cahill said. "We know the guys can score, so it helps us out and gives us confidence to go out there and trust our stuff in the zone, knowing that we have the offense that can pick us up."

Cahill (4-2) was masterful in one of his most dominant outings this season. The right-hander walked one and yielded three hits while pitching through traffic much of the afternoon.

Cahill retired Jim Aducci on a swinging strikeout with the bases loaded to end the first, got James McCann to line out with a runner at second in the fourth and then struck out Jeimer Candelario looking to end the sixth.

It's the first time Cahill has won three consecutive starts since 2012. He improved to 3-0 with a 0.99 ERA in seven starts at the Coliseum this season.

"It's always easier when you're used to pitching in a place, as far as the backdrop," Cahill said. "You're used to the mound. It's just what you're most comfortable with."

Davis provided all the offense Cahill needed with his 31st home run leading off the fourth against Tigers starter Francisco Liriano (3-6). It was his 10th in 16 games since the All-Star break.

"When he first hit it I'm thinking base hit to center field," Melvin said. "Then you watch it carry. Next thing you know it's over the fence. He definitely does not have to square it up to hit a home run."

Chapman hit his 15th homer, a two-run shot off Daniel Stumpf, in the seventh.

Olson homered in the eighth, his 22nd.

"That team can be very explosive and they made us pay a couple of times," Tigers manager Ron Gardenhire said. "Kind of like how the whole series went."

Oakland acquired right-hander Shawn Kelley for international slot money from the Nationals, who no longer wanted the reliever after he slammed his glove to the ground and glared into Washington's dugout during a game last week. The Nationals also sent cash to the A's in the swap.

Laureano had a busy three days after being called up from the minors. He delivered the game-winning single in the 13th inning Friday for his first major league hit, made a pair of defensive gems Saturday and then drove in Olson with the second of his three hits Sunday.

"Today I just relaxed and felt good," Laureano said. "I felt like I usually play."

Athletics: Chad Pinder (car accident) is expected to return Tuesday when Oakland begins a three-game series against the Dodgers. Pinder hit off a machine in the batting cage and has already been doing fielding work.

Athletics: LHP Sean Manaea (10-7, 3.38) will make his seventh interleague start Tuesday against the Dodgers, tying him for second-most in major league history for one season.