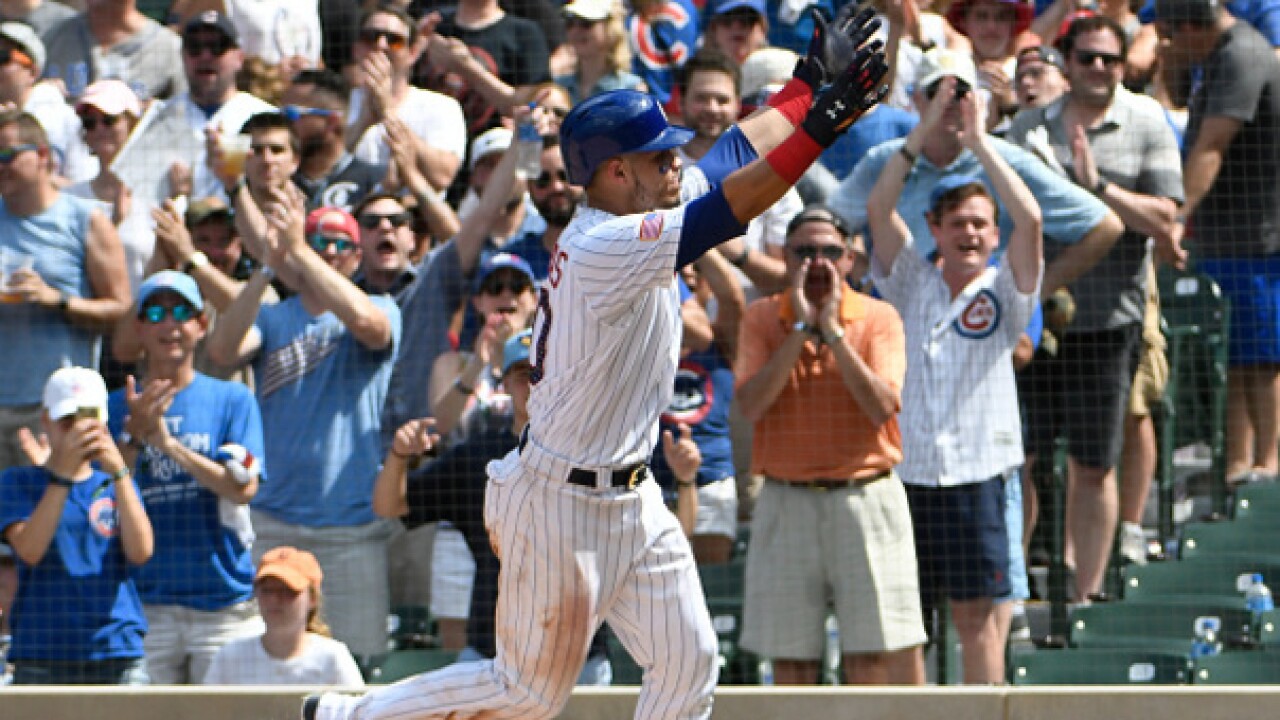 Copyright 2018 Scripps Media, Inc. All rights reserved. This material may not be published, broadcast, rewritten, or redistributed.
David Banks
<p>CHICAGO, IL - JULY 04: Willson Contreras #40 of the Chicago Cubs reacts after crossing home plate after hitting a home run against the Detroit Tigers during the sixth inning on July 4, 2018 at Wrigley Field in Chicago, Illinois. (Photo by David Banks/Getty Images)</p>

Javier Baez stole home and Willson Contreras hit a tie-breaking homer and to lead the Chicago Cubs past the Detroit Tigers 5-2 on Wednesday for their sixth straight victory.

Conditions at Wrigley Field favored the longball, with a game-time temperature of 92 degrees, a heat index of 102 and the wind blowing out.

David Bote hit his first homer while Detroit got solo shots from Nick Castellanos and John Hicks, but was swept by the Cubs in the two-game interleague set and has dropped 13 of 15.

Bote, playing third in place of injured Kris Bryant, smacked his drive into the batter's eye shrubs in straight-away center on the first pitch he faced in the second to tie it.

Contreras homered in the sixth and then added a two-run double in the seventh.

Chicago starter Jose Quintana (7-6) allowed two runs on five hits through six innings to win for the first time since May 31.  Detroit's Francisco Liriano (3-5) permitted three runs on five hits and five walks in his third outing --and third loss -- since returning from the disabled list.

Brandon Morrow pitched the ninth for his 19th save in 20 chances.

Castellanos hit his 14th homer, and third in five games, to left in the first to put Detroit ahead 1-0.

Hicks' shot in the third landed halfway up the left-center bleachers and put the Tigers back in front, 2-1.

Baez capped an eventful trip around the bases by stealing home with one out in the fourth to tie it at 2. He singled to lead off the inning, then Liriano picked him off first base. But Hicks' throw to second sailed into left field and Baez advanced to third.

Baez sprinted home when Liriano tried pick off Addison Russell at first. Hicks' throw to catcher James McCann was quick and accurate, but Baez slid head-first and touched the plate before McCann could tag him.

Bote played his 15th game in the majors and entered hitting .241. The 25-year-old was recalled from Triple-A Iowa for the third time this season on June 26.

The Cubs recalled C/INF Victor Caratini from Triple-A Iowa and designated C Chris Gimenez for assignment. Caratini started at first base on Wednesday as Anthony Rizzo didn't enter the game until he pinch hit in the sixth.

Caratini was on the Cubs' opening day roster, then was sent to the minors on May 25 for more playing time. With Iowa, the 24-year-old batted .313 with four home runs and 22 RBIs in 32 games. He's a switch-hitter who can play the infield and catch.

Cubs:  Although he was eligible to come off the disabled list on Tuesday, the earliest INF/OF Bryant (left shoulder inflammation) will return is Friday. Maddon said Bryant was still feeling some soreness. . Maddon said RHP Yu Darvish (right triceps inflammation, right elbow impingement/inflammation) is feeling better, but there's no timetable for him to resume throwing. Darvish got a fresh opinion and a cortisone shot from Dr. Keith Meister last Friday in Texas after suffering pain in a bullpen session in Los Angeles on Thursday. "We want to develop a plan to get him back out there as soon as possible," Maddon said.

Cubs: Following a day off on Thursday, Chicago sends LHP Mike Montgomery (3-2, 3.55) to the mound against RHP Tyler Mahle (6-6, 3.83) to open a three-game set against the Reds at Wrigley Field.