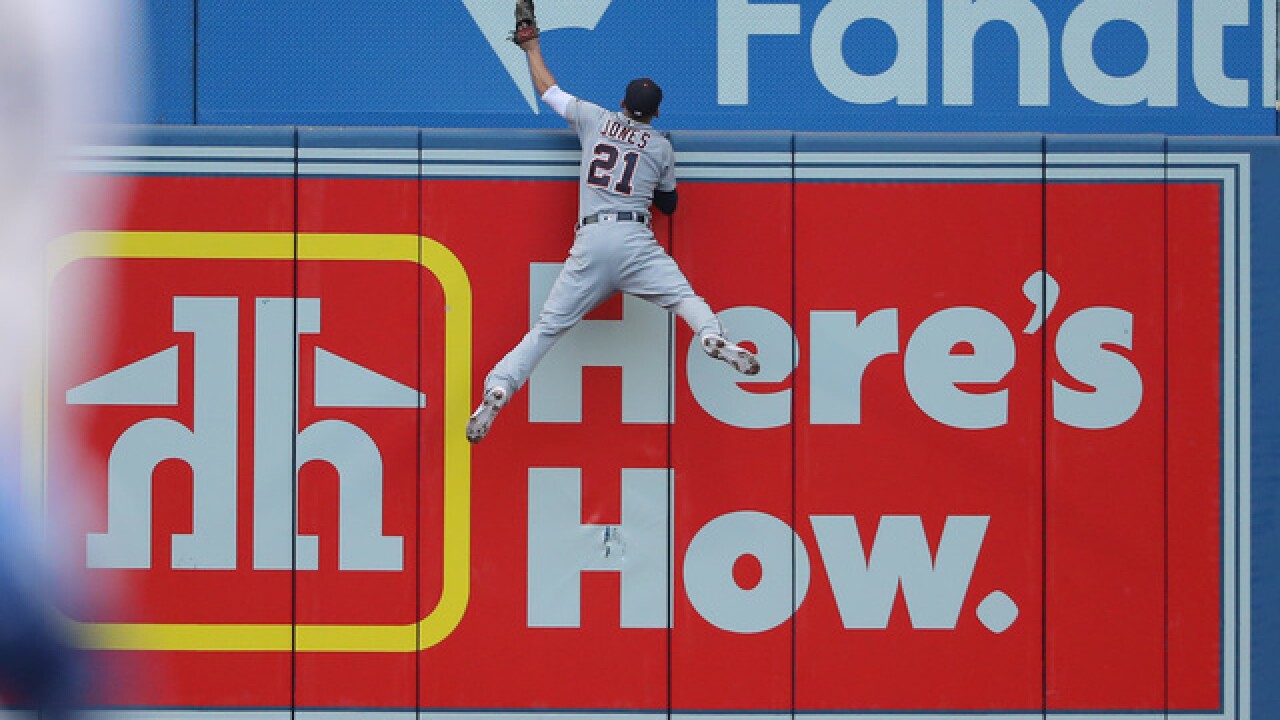 Copyright Getty Images
Tom Szczerbowski
<p>TORONTO, ON - JUNE 29: JaCoby Jones #21 of the Detroit Tigers climbs the left field wall but cannot get to a two-run home run hit by Justin Smoak #14 of the Toronto Blue Jays in the fourth inning during MLB game action at Rogers Centre on June 29, 2018 in Toronto, Canada. (Photo by Tom Szczerbowski/Getty Images)</p>

Making his second start after missing 39 games because of a sore shoulder, Stroman allowed two runs and five hits, lowering his ERA from 6.80 to 6.20. The right-hander struck out four and didn't issue a walk for the first time in nine starts this season.

Seunghwan Oh pitched the eighth and Tyler Clippard gave up an infield single to begin the ninth but retired the next three batters in order for his fifth save in nine chances.

Detroit opened the scoring when JaCoby Jones scored on Dixon Machado's double play groundout in the third, but the Blue Jays answered with a three-run fourth, with the first six batters reaching safely against Detroit's Francisco Liriano.

Smoak hit his 10th home run and first since June 3 at Detroit, and Randal Grichuk added a two-out RBI single.

Tigers infielder Jeimer Candelario cut it to 3-2 with a solo homer, his team-leading 12th, to begin the seventh.

Liriano (3-4) allowed three runs in six innings to lose his third straight decision. The left-hander is winless in seven starts since a victory at Baltimore on April 28.

TRAINER'S ROOM
Tigers: LHP Daniel Stumpf (ulnar nerve) allowed one run and two hits in one inning at Triple-A Toledo. It was the first time Stumpf had pitched in back-to-back games since beginning his rehab assignment June 19.

Blue Jays: RHP Aaron Sanchez (right index finger) has not been able to throw since landing on the 10-day disabled list June 22 and is unlikely to be ready to return when eligible Monday, manager John Gibbons said. ... Toronto selected utilityman Darnell Sweeney from Triple-A Buffalo to take the roster spot of OF Steve Pearce, who was traded to Boston on Thursday.