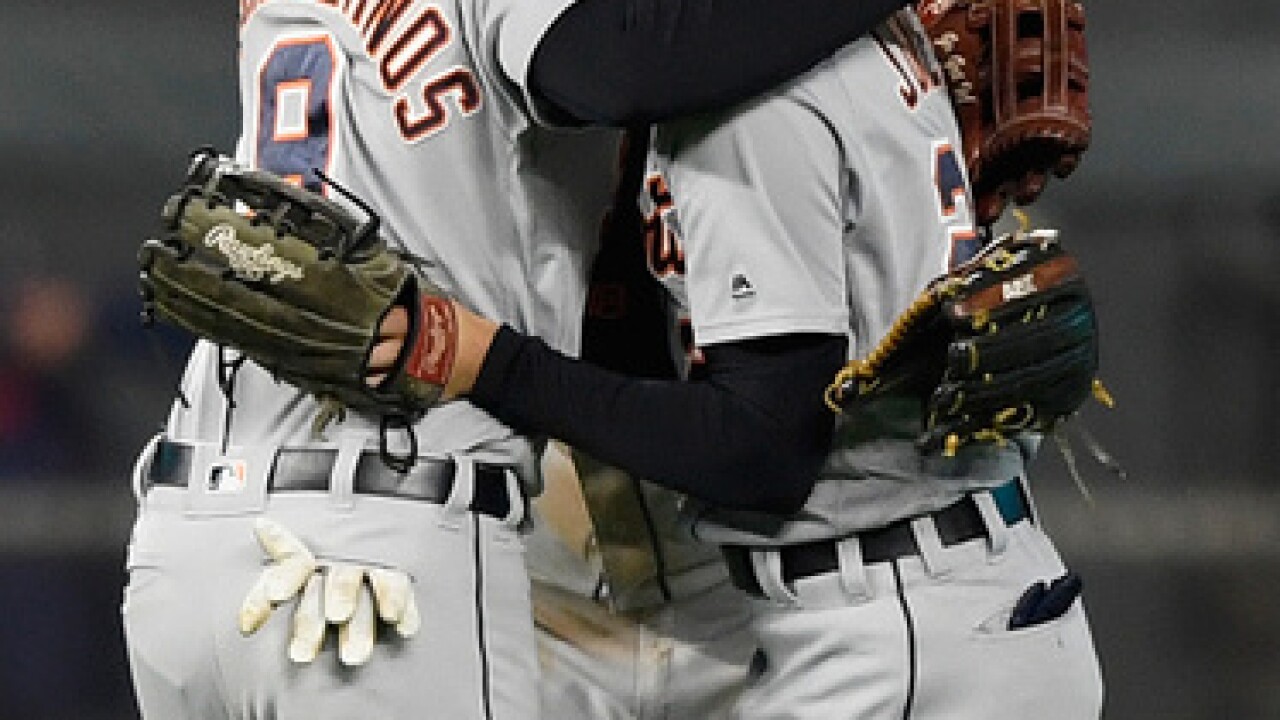 Harold Castro's first career hit started an eighth-inning rally that led the Detroit Tigers to a 4-2 victory over Minnesota on Tuesday in a game in which Joe Mauer set the Twins' record for reaching base.

Mauer singled in the first inning, reaching base for the 3,073 time in his career and surpassing Hall of Famer Harmon Killebrew.

Castro was at home in Venezuela because the minor league season was over when Detroit selected his contract from Triple-A Toledo last week. He made his first career start in his second game, and singled to start a four-run rally in the eighth inning for the Tigers.

Victor Alcantara (1-0) earned the win with a scoreless inning in relief of starter Spencer Turnbull, who allowed one run in six innings in his second major league start. Shane Greene earned his 32nd save.

Twins reliever Trevor Hildenberger (4-6) surrendered four runs and retired one batter while giving up three hits and a walk.

Mauer finished with two hits, a walk and two runs scored. Mauer could be playing his final homestand after 15 seasons with Minnesota. He is a free agent after the season and has said he'll decide after the season whether to retire.

Kohl Stewart pitched six scoreless innings as the Twins' "primary" pitcher. He gave up two hits and struck out five batters after Gabriel Moya started and pitched one inning. Minnesota is 3-4 in games in which it's used an opener.

Stewart has thrown 12 straight scoreless innings and has allowed just three runs in 20 1/3 innings in four games as one of the team's primary pitchers.

Tigers: CF JaCoby Jones was back in the lineup after missing Sunday's game with a shoulder injury.

Twins: Manager Paul Molitor reiterated that OF Eddie Rosario's season is done because of a right quadriceps injury. ... Molitor is hopeful Miguel Sano, who has played just one game since Sept. 4 because of a bruised leg, can still return this season. ... C Mitch Garver has cleared concussion tests. Garver has been out since Sept. 12. ... RHP Aaron Slegers was activated off the disabled list after recovering from right shoulder inflammation.

Right-hander Jake Odorizzi (7-10, 4.35 ERA) will make his 30th start of the season for Minnesota on Wednesday. Detroit will counter with left-hander Matt Boyd (9-12, 4.16), who is making his 31st start of the year in the middle of the three-game series. Odorizzi is coming off back-to-back quality starts for the first time this season after beating the Tigers on Sept. 18. He allowed two runs on four hits in 6 1/3 innings. Boyd had his shortest outing of the year in his last start, giving up five runs -- two earned -- in 1 1/3 innings against Kansas City. He's 1-2 with a 3.80 ERA against the Twins this season.