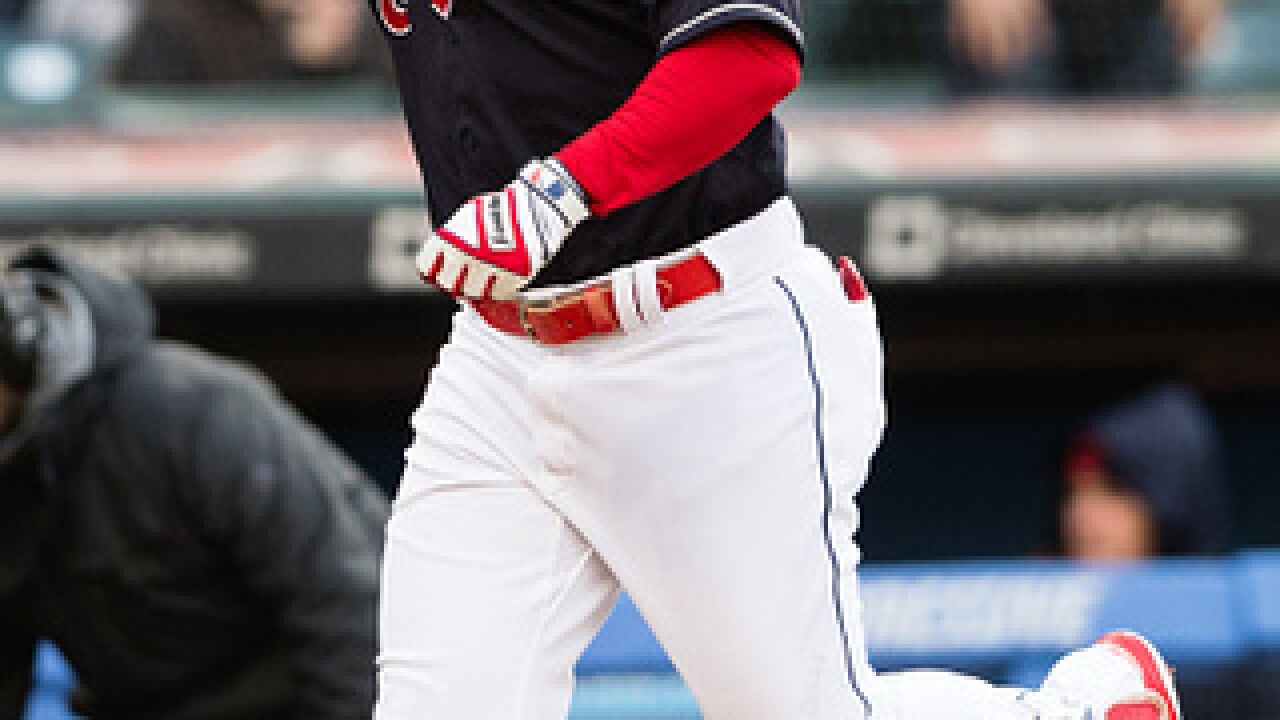 Copyright 2018 Scripps Media, Inc. All rights reserved. This material may not be published, broadcast, rewritten, or redistributed.
Jason Miller
<p>CLEVELAND, OH - APRIL 10: Jose Ramirez #11 of the Cleveland Indians rounds the bases after hitting a solo home run during the first inning against the Detroit Tigers at Progressive Field on April 10, 2018 in Cleveland, Ohio. (Photo by Jason Miller/Getty Images)</p>

Roberto Perez hit a leadoff home run in the eighth inning against reliever Alex Wilson, lifting the Cleveland Indians over the Detroit Tigers 2-1 on Tuesday night.

Perez belted a 2-0 pitch to center field that landed in the seats in front of the bullpen to give Cleveland its ninth straight win over Detroit. The Indians are 29-10 against the Tigers since the start of the 2016 season.

Jose Ramirez's two-out homer in the first put Cleveland ahead, a lead that lasted until Jeimer Candelario's seventh-inning double. It was Detroit's first run in 23 innings.

Andrew Miller (1-0) pitched a scoreless eighth. Cody Allen worked the ninth for his third save.

Indians starter Josh Tomlin bounced back from a rocky outing in his first start with five strong innings. Matthew Boyd allowed one run in seven innings for Detroit.

Wilson (0-2) came in to start the eighth and quickly fell behind Perez. The Cleveland catcher made amends for a throwing error in the seventh with his go-ahead homer.

Cleveland is batting a major-league low .158 but has won its last three games via the long ball. Yan Gomes hit a game-ending two-run homer Sunday against Kansas City, and Bradley Zimmer had a two-run homer Monday night.

Candelario had three doubles and was hit by a pitch. The Tigers hadn't scored since the first inning Sunday against the Chicago White Sox. Corey Kluber and Miller combined on a two-hit shutout Monday.

Victor Reyes, a Rule 5 draft selection from Arizona, led off the seventh with a single for his first major league hit. Reyes stole second as Dixon Machado struck out and took third when Perez's throw to second baseman Jason Kipnis was in the dirt and bounced into center field.

Dan Otero struck out pinch-hitter JaCoby Jones, but Candelario's sharp grounder over third base tied it.

Tomlin lasted only three innings in first start against the Angels, allowing eight runs, including four homers. He experienced back soreness in that game and had his turn in the rotation pushed back a day.

Detroit left the bases loaded in the third when Niko Goodrum tapped back to Tomlin to end the inning.

The game-time temperature of 40 degrees was a big improvement over the blustery conditions the previous three days. The teams played in 33 degree weather Monday night. Sunday's 32 degree first-pitch temperature against Kansas City set a Progressive Field record while Saturday's game-time mark was 34 degrees.

Tigers: Tigers RHP Buck Farmer (left hip) was available, but Gardenhire said he would only use him in an emergency. Farmer was removed in the seventh inning Monday after experiencing a spasm.